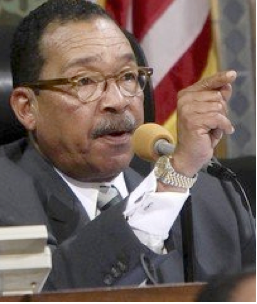 LA WATCHDOG - City Council President Herb Wesson must not have read Governor Brown’s memo to cool it on new taxes because these additional levies will cause voters to consider his $6 billion tax increase as just another assault on the wallets of hard working, beleaguered Californians.

Rather, the Wesson led City Council is going whole hog as it is now considering four tax measures totaling $400 million which, according to the financial wizards in City Hall, our cash strapped city desperately needs to “prevent further cuts in parks, police, fire and other services.”

Just this week, Wesson surprised Governor Brown and even City Hall insiders by proposing to raise $220 million through a half-cent increase in the City’s sales tax.  We would then have the highest sales tax (9.25%) of any major city in the nation.

This is in addition to the previously announced doubling of the Documentary Transfer Tax, already the highest in the county; a 50% increase in the parking occupancy tax; and a $39 parcel tax to benefit the Department of Recreation and Parks.

See “City Hall Rascals Do Not Deserve Our Votes to Increase Taxes.”

However, once again, City Hall, denying (a la Alfred E. Neuman) any culpability for the City’s financial plight (“not of our own making”), is obscuring the fact that these proposed tax increases are designed to finance next year’s $300 million escalation in salaries, benefits, and pension contributions that were approved by the Executive Employee Relations Committee (the “EERC”), the City Council, and the Mayor.

And over the next four years, these personnel costs are projected to increase by over $750 million, including a 50%, $450 million increase in pension contributions.

Overall, by 2017, pension contributions and medical and other benefits will devour $2 billion, or 40% of the General Fund.

So much for our services!

Rather than increasing our sales tax to the highest in the nation or raising the documentary transfer tax to the highest (by far) in the County, the City Council would be better off focusing on reforming the out of control escalation in personnel expenditures.

The City Council should endorse and place on the ballot Mayor Riordan’s Plan for pension reform that is projected to eliminate the budget deficit by 2017.

The Riordan Plan would establish a Defined Contribution Plan for all new City employees, including the police and firefighters as well as new members of the Department of Water and Power.

The Riordan Plan would also impact current City and DWP employees by eliminating spiking; requiring contributions that equal to City’s actual costs for providing the annual benefits; and limiting increases in “pensionable” pay if the City’s contributions to its pension plans exceed certain reasonable limits.

Perversely, while the prospect of any new taxes being approved by Angelenos is slim as a result of the utter lack of confidence in City Hall, the self serving union leadership of the City’s labor unions, and their numerous cronies, placing these tax increases on the ballot will, along with the Riordan Plan for pension reform, define the issues in the upcoming City elections.

To date, none of the City Hall insiders running for Mayor or Controller (Eric Garcetti, Wendy Greuel, Jan Perry, and Dennis Zine) have endorsed the Riordan Plan for pension reform for fear of alienating the campaign funding union leadership, including DWP Union Bo$$ d’Arcy.

Only City Hall outsider Kevin James, a former federal prosecutor and past leader of AIDS Project LA, has endorsed the Riordan Plan for pension reform because of his concern about the very solvency of our City.

James has also endorsed the proposed charter amendment that would require the City to “Live Within Its Means” by adopting two year balanced budgets based on Generally Accepted Accounting Principles and, over the next ten years, by eliminating the $10 billion unfunded pension liability and by repairing streets and the rest of our deteriorating infrastructure.

After November 6, we will have the opportunity to ask Garcetti and Greuel, two consummate City Hall insiders who were members of the EERC that gave away the City to the union leadership in 2007, what happened to the 25%, $850 million increase in General Fund revenues between 2005 and today, and the projected 35%, $1.3 billion bump between 2005 and 2017.

So where did all this money go, especially since our streets are a disgrace and our pension plans are underfunded by $10 billion, an increase of over $6 billion since 2005.

Are you for or against Mayor Riordan’s plan to reform our busted pension systems?

Are you for or against the proposed increase in our taxes?

(Jack Humphreville writes LA Watchdog for CityWatch He is the President of the DWP Advocacy Committee and the Ratepayer Advocate for the Greater Wilshire Neighborhood Council. Humphreville is the publisher of the Recycler -- www.recycler.com. He can be reached at: [email protected]) –cw