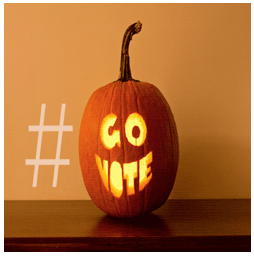 ALPERN AT LARGE - After a fun and exciting Halloween with my family and friends, I came home to answer some very interesting—and scary—questions about the upcoming elections from my sixth-grader son.

It appears that his middle school gave a sample state ballot for the students to answer, and my son was perplexed by the many initiatives and elections that went far beyond the presidential choice.  The scary thing about this ballot—even scarier than any Halloween fright—is that most adults are pretty perplexed as well.

I did throw out an extensive but fairly rapid-fire piece on the many initiatives last week for CityWatch readers, and it involved the adult perspective of being “thirty-something” for these “thirty-something” initiatives (Propositions 30-40).  Let me make it clear to the readers that this article’s intent was to either vote WITH my line of thinking, vote AGAINST my line of thinking … or …

NOT VOTE AT ALL!

The latter option is one I don’t like, but occasionally do for judicial elections because I am keenly aware that the “right” decision is one that is out of the knowledge range of virtually every voter.

So it usually occurs to me that the only way I can vote (if I make the decision to vote) on a given judge is to see which major political party and/or law enforcement and/or newspaper endorses one side or another.  Consensus of all parties makes me happy; a lack of consensus and defining information makes me have to choose, which I’ll do more often than not but I really don’t like voting that way.

After all, I have friends, family and even my patients in clinic asking me what the heck to vote for this time around on a daily basis (why they think I have any clue is beyond me), and I can see both merit and problems with asking the general population to STEP UP to this effort.

But many have died for us to have this conundrum, and the majority of humanity would have died (and continue to die in places such as Syria and Iran) for the luxury of this conundrum, so we must STEP UP for their sake.

The good news is that wisdom and being smart has more than one level.  Common sense and a healthy dose of cynicism provides a wonderful counterweight to “the best and brightest” holding their “superior intelligence” as a tyrannical psychological force that potentially pulls us into a bad direction and that hurts us all.

For example, the educational and other unions that hold us under psychological hostage (you like teachers, kids, firefighters, police officers, construction workers, puppies, Mother Nature, etc., don’t you…DON’T YOU???  DOOOOOON’T YOOOOUUUUU?) throw money at forcing propositions down our throats, or throw money against propositions that are necessary to balance the budget…but it’s OUR money that WE paid THEM and now WE potentially get HURT by OUR money!

And despite my disgust with former Governor Schwarzenegger’s failure to be brave and fight on after the educational and other public sector unions prevented his initial ballot reform efforts to fix pensions, teacher tenure and other abuse, how many of us now realize that his initial efforts (which we voted him into office for, if I recall) were spot-on?  After all, when his measures failed he had to go to gimmicks and kicking the can down the road (which he concluded we wanted instead of a true fix to our budgetary and operational structural problems).

But Governor Brown is having a tough time making a central pitch to voters who, despite the governor’s previous cost-cutting and pension reform efforts has not convinced voters he’s gone far enough.  Proposition 30 is going down in the polls, and is likely to fail at this point, so we’re probably sending Governor Brown as mixed a message as we sent to his predecessor.

But we’re also sending Charles Munger’s favored Proposition 32 (which I support) to limit union and corporate (but mainly union) influence on state politics to defeat as well, despite the fact that Mr. Munger is much of the fiscal and operational force behind those opposing Proposition 30.

Furthermore, Molly Munger’s Proposition 38 (the competing educational tax hike that goes straight to the classroom, unlike Proposition 30, and which I personally support) also appears to be heading to defeat.

Frankly, I like Brown and both Charles and Molly Munger (the latter two are siblings, if you didn’t know by now), but perhaps it’s best if the population does the right thing by defeating all their measures and, in effect, say:  We want balance, and none of you appear to have achieved consensus and transparency and gone far enough to make your measures worth our vote.

And as for my sixth-grader son?  Well, he pleased me to no short end by concluding he was not capable of making such big decisions on such short notice, and both he and the majority of his classmates reportedly chose NOT to vote.  In other words, he and his classmates showed the wisdom of looking before they leapt, which for sixth-graders is wisdom, indeed.

I encourage you all to vote, to weigh the merits and endorsements of each initiative and candidate for political office, and to realize that you’re smart enough to make your own decisions…even if you choose to either NOT vote on a given initiative or to vote NO on every initiative that doesn’t make sense to you.

The ballot is a bit scary, but not so scary we can’t figure out what to do.  After all, we’re big boys and girls.

(Ken Alpern is a former Boardmember of the Mar Vista Community Council (MVCC), previously co-chaired its Planning and Outreach Committees, and currently is Co-Chair of its MVCC Transportation/Infrastructure Committee. He is co-chair of the CD11 Transportation Advisory Committee and chairs the nonprofit Transit Coalition, and can be reached at [email protected] He also co-chairs the grassroots Friends of the Green Line at www.fogl.us.   The views expressed in this article are solely those of Mr. Alpern.)
-cw