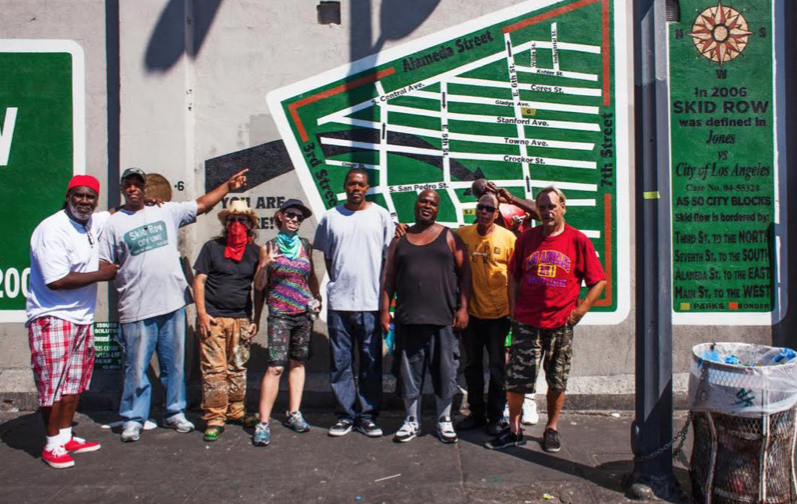 EASTSIDER-You have to hand it to Jose Huizar.

His pathetic manipulations of the NC Subdivision Ordinance, along with camp follower Grayce Liu, have gotten the Skid Row folks so angry that they have now sued the whole bunch!

I am looking at a copy of the 3rdAmended Petition for Writ of Mandate, Administrative Mandate and Declaratory Relief, provided to me by the Skid Row NC Formation Committee. Don’t be intimidated by the huge file size. The real meat is contained in the first 48 pages and is well worth the read.

Personally, I find it all a fascinating read, and I guess indicative of the fact that if you want DONE and Jose Huizar to behave honestly and follow their own rules, you have to sue them. Sad indeed, but no surprise to all too many of us.

The substance of the suit is that the City colluded with DONE and the Downtown Neighborhood Council (the business umbrella NC for downtown), as well as its lobbyists, to rig the Skid Row election and guarantee failure. Why? How about “clearing the streets for more profitable development and the 2028 Olympic Games.”

As further evidence, the lawsuit asserts that a core reason for the City’s abysmal failure to actually do anything with the $1.2 billion homeless Bond measure HHH, was so the cops could go in and “unconstitutionally criminalize and force institutionalize the Los Angeles homeless population.”WOW!  This is big cheese. Think Chinatown, with its layers of corruption, deceit, and evil intent. Where is Jack Nicholson when we need him?

Mayor Garcetti, who’s role is evidently being the gloved-hand-wearing, ever-available Councilmember Huizar is, in the meantime, safely flying 30,000 feet over Los Angeles, on the way to trying to find his next gig as he terms out. As usual, he’s literally above the fray, leaving Huizar to hold the bag.

Included in this scheme are at least three Business Improvement Districts (aka BIDs) -- the Downtown Industrial BID, the Fashion District BID, and the Historic Core BID. So now we know why Huizar dumped a lot of his poor old majority minority Council District 14 folks in the 2012 Redistricting, in favor of “going downtown” so he could bask in the sweet taste of money.

As previously reported (“How LA’s Skid Row Got Screwed”), I characterized the key element used by Huizar and DONE to fix the election result:

“When all of this didn’t work, Jose Huizar himself slammed through online voting just for this election, with about two weeks to go before the vote. You have to wonder how many homeless voters had access to any of this tech – as opposed to their opponents with their iPhones, social media chops, and political clout.”

Initially, the pleadings reveal that the Skid Row Election was going to be in person with one polling station in Skid Row. And then along came the fixers, with Huizar as cheerleader and Grayce Liu as his all too willing co-conspirator.

Up until January 2017, there was going to be one physical voting location for an April 6 election.  However, suddenly and without notice, everyone was informed by two DONE employees at a mid-February Town Hall that there would be online voting.

Online voting? For a bunch of Skid Row people? And remember, back in 2016 with the online voting experiment for Neighborhood Council elections, it was such a total screwed up mess that the LA City Council itself suspended all online voting in June 2016.

It turned out that the sudden appearance of online voting was a result of intense lobbying by the affluent -- the two other NCs, the BIDs, and those with the reach to Huizar. The Court filing reveals that at a Special Meeting of the RENC (Rules and Elections, Intergovernmental Relationships, and Neighborhood Councils) Committee, Jose Huizar himself admitted that the meeting was being held to put the fix in for online voting, and his personal pitch prevailed.

Further giving away the plot, Grayce Liu admitted during the same meeting that permitting online voting would “automatically enable” the registration of 847 DLANC and 187 HCNC stakeholders.

To put this in context according to the Formation Committee:

“The Skid Row community is vibrant, and racially diverse community comprised of small business owners, wholesalers, non-profits, and artists. It is also, generally, a low-income community, that includes the largest homeless population in the United States. At last count, that population of approximately 4633 homeless persons, was 62% black.”

Hold that thought. The DONE Elections Manual prohibits homeless persons from voting online or at PUPs!For the uninitiated, a PUP is not a pet adoption entity. No sir, it’s a totally new creation for electronic voting called a “Pop Up Poll” So, what we have is a voting setup where the City contracts with an ethically challenged out-of-state contractor, preregisters over 1000 folks from the existing two Neighborhood Councils so they can automatically vote online with a click of their iPhones, and then deliberately excludes the homeless from this entire process, all 4000 plus of them.

No, I’m not making this up, and just to rub it in, of the 12 pop-up-polls, nine of the twelve were literally outside of the proposed Skid Row NC boundaries. Six of those were within City Hall itself, where I’m sure the Skid Row folks would have had a good time getting through the security cops without getting busted. Honest to God, Vladimir Putin couldn’t have done as good a job of selective deliberate exclusion and guaranteed election outcome.

It was nothing less than a miracle that for all of City Hall’s slimy conduct, the Skid Row NC Formation Committee came within something like 62 votes of winning anyway.

I won’t even go into the pitiful excuse for due process that the Skid Row people experienced when they challenged the election results. It is already covered in some detail in my column about ‘How LA’s Skid Row Got Screwed,”and I believe that title is an accurate summation of DONE and Grayce Liu’s actions.

Back in my youth, I participated in some pretty sleazy elections. But this mess makes stuffing the ballot box look like mere child’s play. So, thank god that the Skid Row Formation Committee did not quietly go away like most Angelenos do when City Hall stomps all over them.

No sir, they got serious, and put it all out there in their lawsuit. The full document linked at the beginning of this piece totals some 1281 pages, most of which are exhibits. If it is possible to get a fair shake in a Los Angeles Court against the high and mighty City Council, the Formation Committee should win hands down. The City’s actions stunk to high heaven, and they didn’t even try to cover up their odious conduct. Of course, this is LA, and we all know that justice is not guaranteed.

We do, however, know a couple of things:

First, it is no secret that the homeless make for very good photo ops when seeking to pass a disingenuous $1.2 billion tax increase masquerading as a homeless bond issue (Measure HHH). Then Measure HHH money can be handled by a secret Council Committee that keeps no minutes until they get caught at it, and all the while has plans for the money that have almost nothing at all to do with the homeless and everything to do with “affordable housing.” Gosh, I love my City of the Angels. I think the Angels left a long time ago in disgust.

The second thing we know is that if the City gets handed its head on a platter by the Superior Court, then Herb Wesson may let Ryu’s Committee actually make some fundamental changes to our current corrupt Neighborhood Council System. Public humiliation is often a tonic for change. A good start would be replacing Grayce Liu and company and seeing if anyone can find the Mayor to replace the BONC.

Of course, I’m still an optimist.