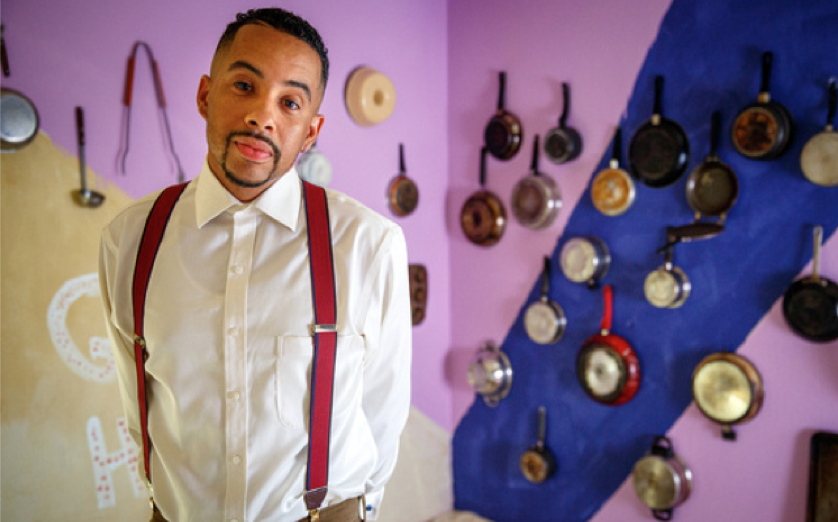 FIRST PERSON-Over the last nine years I have written about the purposeful failure to educate predominantly Latino and African American children in still segregated public school districts like LAUSD.

One of the greatest casualties I have documented that often goes unappreciated, is that when these predominantly minority children are turned loose on society without even a rudimentary educational foundation, this results in the sad reality that "every year across the country, an estimated 200,000 youth are tried, sentenced or incarcerated as adults." This, more often than not, leads to a life buried in the criminal justice system.

What award-winning conceptual artist Ise Lyfe and the small as a GIANT organization have started doing is making the public more aware of facts like, "For every one White youth there are 4.5 Latino youth and 11.6 Black youth facing prosecution as adults in our courts." Why? Because in 46 of our 50 States, judges have the power to waive juvenile offenders into adult court, so you wind up with all too typical criminal cases like that of Joseph Davidson, who was sentenced at 14 years of age to a sentence of 19 years to life.

"More than 6500 youth in California prisons were under the age of 18 at the time of their crimes; some as young as 14." But what makes this dystopian juvenile justice system all the more outrageous is that, of the seventy-six thousand juveniles in adult courts, 83% of them are in court for non-violent offenses. So why not develop a more efficient, less expensive, pragmatic series of juvenile justice programs based on an education model that provides what these young people never got in school? There are other skill strengthening diversions that also could be offered at a fraction of the lifetime cost of incarceration. Routinely convicted youth wind up initially jailed in juvenile facilities only to be transferred to adult prisons, where they are abused and further prevented from any chance of becoming productive members of society.

On Thursday, July 26, smallasagiant launched a presentation and photo exhibit that will travel to seven different locations in California throughout 2019 showing the photographs of 30-50 young people sentenced to 20 or more years in prison when they were under the age of 18. While one would hope that this would humanize and personalize the unjust plight of these predominantly minority youth, left to rapidly age in the criminal justice system, I think something more must be done.

In 1955-56, when Dr. King wanted to address a segregated public bus system that required African Americans to ride in the back of the bus in Selma and Montgomery, Alabama, he found that a boycott that could bankrupt the bus system was the most effective way to do it. Bankruptcy trumped racism.

If African American, Latino, and White churches, mosques, and synagogues want to cut off the supply of minority children to the prison and industrial complex that Ava DuVernay so aptly describes in her recent film “13th,” then purposefully inferior still yet segregated public schools like LAUSD must be boycotted until they actually start to educate all students. No students, no money from the state and federal government -- now you've got their attention.

There are thousands of retired teachers who would gladly work to reconstitute classes in these churches, mosques, and synagogues until the main focus of public education shifts back to educating allstudents. Schools like LAUSD need to be forced away from their presently undisclosed purpose of assuring obscene school district vendors’ profits, to the exclusion of any real education, enabling these districts to “prepare” the next generation of incarcerated youth, supplying the for-profit corporate-run prison system with a fresh supply of slave labor.

If smallasaGIANT hits a brick wall in advocating on behalf of unjustly incarcerated youth -- whose plight serves to make a whole lot of corporations more wealthy -- one can only hope that these same corporations will soon have to take heed of Dr. King's history lesson from the Montgomery-Selma Bus Boycott and apply it to their behavior toward our schools and prisons.