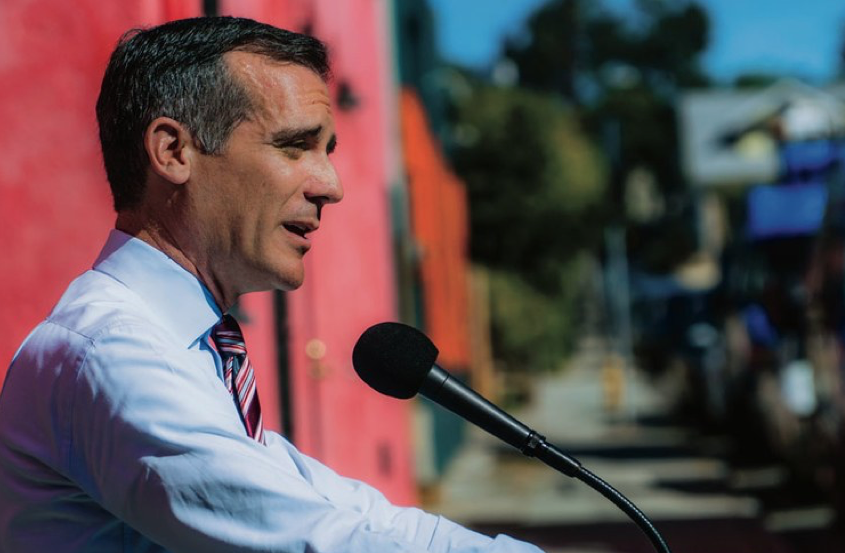 @THE GUSS REPORT-Paging LA Mayor Eric Garcetti. Return to Los Angeles today and start solving our problems, most of which have grown worse on your watch. Your presidential dreams, and the continuous tease about them between you and the local media, are over.

And the people of Los Angeles can thank the United States Supreme Court for snuffing out Garcetti’s dreams. This is how it happened.

On Wednesday morning, the Supremes ruled against public sector unions in a case which essentially said that government employees who are unionized cannot be forced to pay union dues as a condition of their employment, even if they benefit from some of the union’s activities.

For example, if clerks or cops who work for the City of Los Angeles are pro-life, they cannot be forced to pay union dues if they find it objectionable that some of those funds are used by their unions to support pro-choice politicians or candidates. (This is just one of an infinite number of similar scenarios.)

Lawyers for some of the nation’s most powerful unions argued that such public sector employees should still be obligated to pay for the union activities which benefit them, but are not used for political campaigns. These are known as “fair share” fees. That was a fair, but unsuccessful argument.

The Supreme Court didn’t buy it and has now essentially freed all public sector employees from the obligation of paying union dues for any or no reason at all. And if the fees are voluntary, who is going to pay them? Public sector unions are not necessarily dead, at least not yet, but they are in sudden need of a paramedic, unionized or not.

Some media, like the Sacramento Bee, are already disingenuously referring to this as a bad thing for workers. But since when is more freedom and choice for workers a bad thing? Workers can still pay their unions if they believe there is a benefit to doing so. Heck, they can double their contributions to their unions, and they should, if they believe it is worthwhile.

In Los Angeles, this is especially bad for Garcetti and other Los Angeles politicians like City Council president Herb Wesson, who – as I have written – are influenced by that union money to the point of corruption.

Nearly two years ago, after the LA Timeswrote a one-sided, #FakeNews piece about LAFD Deputy Chief / Fire Marshall John Vidovich, I told the other half of the story that the Timesignored, which was that Vidovich exposed extensive corruption at the LAFD, and that Garcetti removed him from his job and gave him a do-nothing gig until retirement. That move is widely believed by LAFD rank and file to be the result of union cash paid to fund Garcetti’s political aspirations. At that time, Garcetti was being flown to hobnob in D.C. by powerful firefighter’s union UFLAC to launch his (to this day unannounced but frequently teased) presidential campaign. LA Weekly’sHillel Aron picked up on my story, provided fair credit, and greater detail.

Now, some of the allegedly corrupt firefighters are suing the City of Los Angeles, as is Vidovich, whose trial is set for October 1. But don’t look for quotes from him in the Times, which in the two years since its phony story has sent virtually half of its staff to Vidovich for an update, to no avail.

The SCOTUS ruling eviscerates the cash flow which appears to have funded Garcetti’s continual trips away from his City Hall office for non-city business. And Garcetti’s office continues to refuse to provide the details of his travel outside of Los Angeles.

Perhaps new-eraLA Timesowner Dr. Patrick Soon-Shiong can ask his seasoned journalists, now led by Norman Pearlstine, whythe Times hasn’t explored in detail Garcetti’s absenteeism from Los Angeles, what is the stated purposeof each and every tripand who paidfor his travel and LAPD security when it isn’t for official and demonstrable city business?

And then Soon-Shiong and Pearlstine should force them to do it.