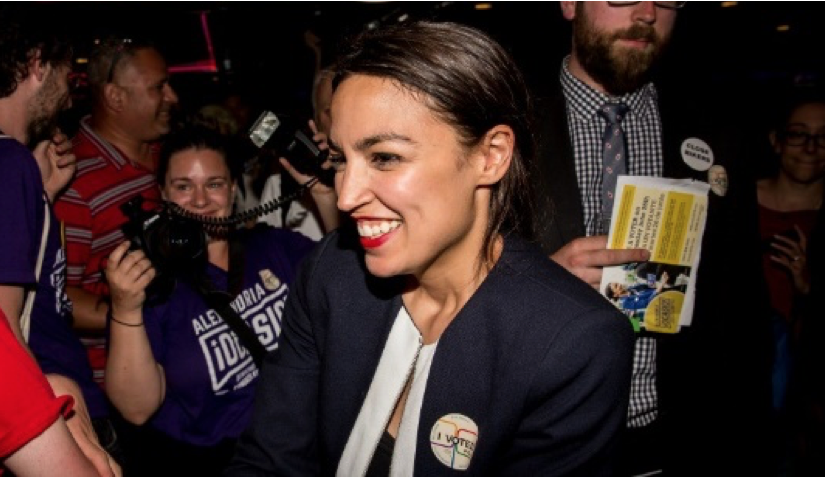 -- and while many in the corporate media scrambled to catch up on the 28-year-old's rise from restaurant worker, to tireless grassroots campaigner, to likely Congresswoman of a heavily Democratic district -- Ocasio-Cortez had no trouble explaining the success of her campaign on Wednesday.

On MSNBC's "Morning Joe," Ocasio-Cortez explained that her campaign was devoted to delivering a "laser-focused message of economic, social, and racial dignity for working-class Americans."

On CNN,Ocasio-Cortez touted her campaign's willingness to "knock on doors that had never been knocked on" and engage with constituents who had been habitually neglected by their elected officials—including Crowley, who lives not in his own district but in Arlington, Virginia.

During her appearance on MSNBC, she responded to a question by anchor Willie Geist about how the U.S. would pay for her progressive agenda -- which includes Medicare for All, a universal jobs guarantee, and tuition-free university and trade school education for all Americans -- by firmly reminding him that the federal government spent hundreds of billions of dollars just a few months ago when it passed the Republican Party's tax law.

"I think we need to look at the damaging legislative history of what we've done with our taxes," said Ocasio-Cortez. "Not only did we have a $400 billion GOP tax cut that could have actually forgiven every single federal student loan in America. We spent that money in December, and we spent it on tax cuts for corporations and the very rich."

Passing laws that support working families and work to lift Americans out of poverty is "absolutely possible," added Ocasio-Cortez, "but it takes the political courage to do it."

Watch Ocasio-Cortez's full interview on "Morning Joe," which starts at the 4:30 mark below:

On NPR's "Morning Edition," Ocasio-Cortez further explained her campaign and vision in an interview with Steve Inskeep. The candidate discussed her full-throated support for abolishing Immigration and Customs Enforcement (ICE), the 15-year-old federal agency that's enforced President Donald Trump's "zero tolerance" immigration policy and the separation of families at the U.S.-Mexico border.

"ICE was just established in 2003 in the same sweep of legislation as the PATRIOT Act, the AUMF, the Iraq War, and so what we're basically saying is that the structure of ICE...is kind of built on the scaffolding of questionable civil liberties infringement and abuse," said Ocasio-Cortez. "And so what we're really talking about is reimagining immigration to be humane in a way that is transparent and accountable."

While the candidate said she doesn't favor the "open borders" that President Donald Trump has accused Democrats of promoting, she told Inskeep, "that doesn't mean that we threaten people's lives, it doesn't mean that we kill them. We have people sabotaging water supplies on our border. I don't think that we should respond by actively harming and potentially putting people's lives in danger."

On CNN, Ocasio-Cortez spoke further about her opposition to ICE and the Trump administration's immigration policy, under which she said secretive children's detention centers are comparable to black sites run by the CIA.

"We are committing human rights abuses on this border and separating children from their families. And that is part of the structure of this agency," she said.

Progressive journalists who have covered Ocasio-Cortez's campaign for months noted that her victory was indicative of a shift away from well-funded establishment Democratic candidates not just in her district, but nationwide.

"For Democrats in the House, in the Senate, and on the presidential campaign trail, Ocasio-Cortez's win signals that things have changed," wrote Ryan Grim, Washington D.C. bureau chief for The Intercept."A politician with millions in the bank and the support of every local Democratic Party chair may be exposed as just a guy with a few rich friends. Politicians are nothing if not savvy about survival, and they have read the meaning of Tuesday night’s upset. They can lock down every big donor and every key endorsement and they can still be beaten, because people still vote—and there is still some democracy left."

(Julia Conley writes for the excellent Common Dreams …. where this report was first posted.) Prepped for CityWatch by Linda Abrams.