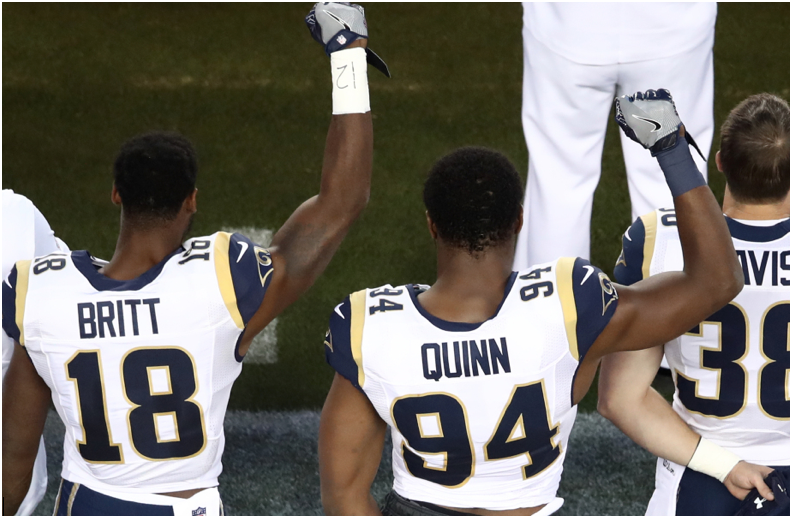 SPORTS POLITICS--In a New York Timesop-ed, several current and former NFL players rejected President Donald Trump's request for a list of people they would like to see him pardon, demanding instead that he enact far-reaching reforms to end the crisis of mass incarceration, which has seen black Americans sent to prison at more than five times the rate of white Americans.(Photo above: LA Rams players raise fists during anthem.)

Trump has displayed a strong reliance on his executive pardon power, granting clemency to racially-profiling sheriff Joe Arpaio and right-wing propagandist Dinesh D'Souza, and saying numerous times that he believes he has the power to pardon himself should he be found guilty of wrongdoing.

But pardoning a handful of victims of racial injustice at the hands of the U.S. criminal justice system will not undo the damage the system continues to inflict on communities of color throughout the country, argued the players.

"President Trump, please note: Our being professional athletes has nothing to do with our commitment to fighting injustice. We are citizens who embrace the values of empathy, integrity, and justice, and we will fight for what we believe is right." —NFL Players Coalition members". These are problems that our government has created, many of which occur at the local level.

“If President Trump thinks he can end these injustices if we deliver him a few names, he hasn't been listening to us," wrote Doug Baldwin, Anquan Boldin, Malcolm Jenkins, and Benjamin Watson of the Players Coalition.

The players expressed appreciation for Trump's decision, made at the request of TV star Kim Kardashian West, to release Alice Marie Johnson from prison earlier this month. Johnson served more than 20 years of a life sentence for a non-violent drug offense, similar to those that have landed more than 450,000 Americans behind bars, including 79,000 who are in federal prisons—tearing them away from their families and communities.

"People like Alice Johnson, for example, should not be givende factolife sentences for nonviolent drug crimes in the first place," wrote the players. "The president could stop that from happening by issuing a blanket pardon for people in that situation who have already served long sentences. ...Imagine how many more Alice Johnsons the president could pardon if he treated the issue like the systemic problem it is, rather than asking professional football players for a few cases."

Before meeting Kardashian West at the White House this month, Trump had been openly hostile and derogatory toward NFL players who have used their platform to call attention to racial injustice by kneeling while the national anthem plays before football games. The players strongly pushed back on the notion that celebrities should keep quiet about matters of politics and social justice.

"President Trump, please note: Our being professional athletes has nothing to do with our commitment to fighting injustice," the players wrote. "We are citizens who embrace the values of empathy, integrity, and justice, and we will fight for what we believe is right. We weren't elected to do this. We do it because we love this country, our communities, and the people in them. This is our America, our right."

(Julia Conley writes for the excellent Common Dreams …. Where this report was first posted.)