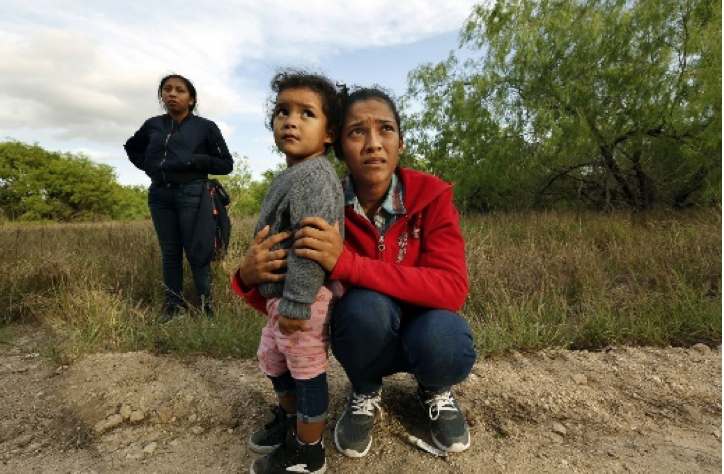 BCK FILE--Honoring fathers this past Sunday, it was difficult not to reflect on the status of thousands of children who have been torn from their parents as a display of the strong-armed immigration policy that has been a centerpiece of the Trump campaign and now, administration.

As a mother, I can’t imagine the fear, terror, and sadness these children and their parents face. I don’t believe parents have an exclusive on empathizing with this horrific practice but it’s been especially poignant for me as I have watched my own daughters graduate from college and high school this past month, sharing in their successes, as well as being there for their challenges, experiences neither these children nor their parents will have.

Removing children from parents, as Laura Bush cited in a Washington Postop-ed piece  is inhumane and cruel. This practice will have long-lasting impact on the emotional and physical health of these children.

To date, in a former Brownsville, Texas Walmart Superstore, 1,500 children are being kept at the Casa Padre detention center after being separated from their parents at the border. The Trump Administration practice has been strongly criticized by the Office of the United Nations High Commissioner for Human Rights, which called for an immediate end to the practice as a violation of international law and children’s rights.

In the past six weeks, close to 2,000 families have been separated with hundreds of children now in detention centers, a policy Attorney General Jeff Sessions has excused with a biblical passage that had previously been applied to justify slavery.

Trump’s latest tweets suggest that he is using the separation tactics as leverage to get Democrats to sign off on his infamous “wall” at the border. Exploiting children for political gain is egregious and it appears doubtful these children will ever be reunited with their families. In fact, a new Trump Administration policy mandates that family members who come to take custody of these children be fingerprinted and the Department of Health and Human Services has already had to add one temporary shelter to house the over 11,400 migrant children currently in federal custody. Over 2,400 have arrived since May. The Trump Administration plans to construct tent cities at Texas military posts to house additional children.

Donald Trump vacillates between assigning blame to Democrats while attempting to affect a zero tolerance immigration policy that has been a centerpiece of his campaign rhetoric. However, according to the New York Times, this policy has been under consideration since the earliest days of the Trump presidency, an idea generated by senior policy advisor Stephen Miller and supported by White House Chief of Staff John Kelley.

Miller played a key role in establishing a policy of prosecuting undocumented immigrants and removing their children in the process, a program Miller excuses as “zero tolerance for illegal entry, period.”

From the earliest days of Trump’s campaign, he has exploited the immigration issue as dog whistle, placing erroneous blame on undocumented immigrants from Mexico for everything from crime and unemployment to drug trafficking. The notion of a wall to stop immigration first thrown out at a campaign rally has become a symbol of Trump’s inadequacies as president. If he fails to build the wall, he will face humiliation; the policy of removing children from their families is yet another show of false strength.

Trump’s handling of this issue is highly problematic and indicative of his lack of accountability, refusing to accept any responsibility for this policy and instead, blaming Democrats for refusing to support his draconian suggestions.

This cannot and should not be a partisan issue. It should be a moral imperative to speak out against this policy that abuses children for political gain.

We are better than this.

What You Can Do to Help:

Numerous nonprofit organizations support pro-bono legal representation and other needs. ActBlue Charities has set up a link that accepts donations from 8 different organizations, including ACLU, United We Dream, Kids in Need of Defense, and Asylum Seeker Advocacy Project.

Contact your elected officials. There are several bills under consideration, including the Senate Democrats Keep Families Together Act and the Fair Day in Court for Kid Act. These bills would prohibit separating families at the border. Let your representatives know you oppose separation and you encourage support of any bills that would end this practice.