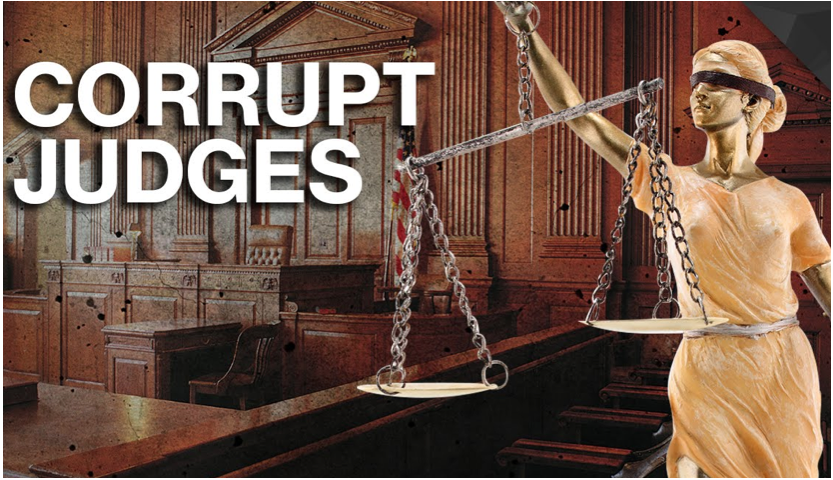 CORRUPTION WATCH-Once again we are faced with a conundrum: and we’re all responsible for it, though at the same time, none of us is. I speak of voting for judges!

On primary day, June 5, 2018, we are expected to vote for judges. Really? Like I know who’s who, and I’ve been an attorney for 40 years. Okay, once in a while, I do know who’s been naughty and who’s been nice, but that’s very seldom. Nonetheless we are supposed to vote.

Why vote when one has no basis on which to decide for whom to vote? That is like playing pin the tail on the donkey but using a loaded pistol. The alternative means to select judges is to have creepy politicians appoint one of their ethically challenged buddies – which is the way most judges do get on the bench.

Thus, I’ve developed some guidelines to help me narrow down the choices. I know that it is a little unfair to apply my general rules to specific individuals, but I did not design this ferkakte system. Being OCD, I have to vote.

1) Never, ever vote for any judge. A “commissioner” is a type of judge and a “state bar judge” is a judge. Play Nancy Reagan and “just say No” to anyone with “judge” in their ballot by-lines.

2) Assistant District Attorneys and other “prosecutors” are the second group that merit a standard No Vote. Among these, gang prosecutors are the worst. They have a passion to incarcerate everyone, and that ends up sending young men to prison, the “College for Criminals,” and that costs us taxpayers a fortune.

4) Attorneys at Law – Hard to assess. It usually means that they are in private practice, and thus, they may know how corrupt the courts have become. Do they want to fight for justice or do they want to get in on the spoils of corruption? My guess is that there is a 60% chance that they want to be honest.

5) Imposters –  I see one candidate, Onica Valle Cole, who identified herself as “Attorney / Mother,” while concealing her “15 years as a Los Angeles Criminal Prosecutor and endorsed by Los Angeles County judges” – my personal rating system gives her a double kiss of death. No, make that a triple kiss of death as she committed fraud on the voters by omission when she left that info off her ballot by-line. That’s how prosecutors work – they commit fraud by omission. When there is materially important evidence, prosecutors hide it from the court. Thousands of crime lab reports in Orange County, for example, are the result of falsification or suppression, but the OC prosecutors conceal that data. Prosecutors are intentionally rail-roading thousands of people into prison each year. Again, that costs taxpayers a fortune and results in manufacturing criminals.

If anyone uses my silly little system, they will find that almost no one merits a Yes vote. On the other hand, it might prevent some of the worst from becoming judges.

Who is responsible for this system?

In a way we all are responsible as we exist in a free society, but in another way, none of us is responsible. I did not devise this judicial system, but maybe I have failed over the decades to press for “Truth, Justice and the American Way.” Suppose I had spent time working in an Innocence Project rather than also becoming a real estate broker? Isn’t our society somehow the composite of all of us? What is our society but a reflection of our values?

There is something horribly wrong with our judicial system and we cannot expect the crooks to reform it. If you do not think that California’s judicial system has a horrible ethical dilemma, please note that Steven Moawad, the newly appointed Chief Trial Counsel for the State Bar, who is the numero uno honcho to run rough shod over all the rogue attorneys in California, had to withdraw his name from consideration for permanent status due to his own ethical violations!

That’s after his two predecessors had to leave for the same reason. The Office of the Chief Trial Counsel frames innocent attorneys and allows corrupt attorneys to go free. This corruption has been happening for years and the current story about the State Bar’s Chief Trial Counsel should give the public a hint of how the California’s judicial system has fallen into ethical shambles.