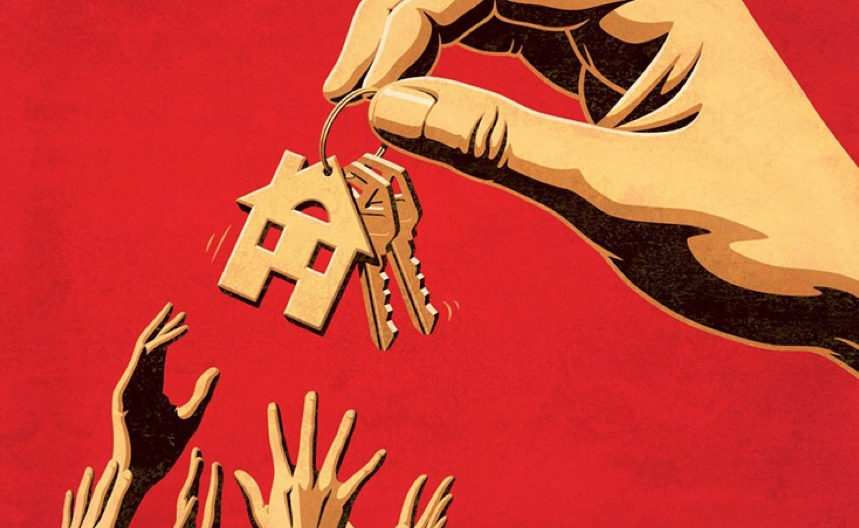 RENTERS’ REDEMPTION-Real estate speculation and price-gouging are driving Californians to impossible commutes, overcrowded housing, and into the streets.

By voting for the Affordable Housing Act ballot measure this November, Californians can restore the rights of cities to use a powerful tool to stop this escalating crisis: rent control.

Twenty years ago, however, Sacramento legislators took away the rights of local California governments to regulate the cost of rental housing. Passed by one vote in 1994, the Costa-Hawkins Rental Housing Act froze or undid California's municipal rent-control laws. Ratifying the Affordable Housing Act would repeal Costa-Hawkins and give those rights back.

Republicans and the landlord lobby, which spent $50 million to push Costa-Hawkins, claimed the law would incentivize developers to build more housing, which would cause rents to fall. Yet rents are soaring, and affordable housing is scarce. When Boston lost its rent control laws in 1994, both median rent and the homeless population doubled.

Instead of a building spree beneficial to California renters, Costa-Hawkins accomplished four things, each devastating to the affordability of housing in the state.

Before 1995, most municipal rent control laws applied to buildings of all types and sizes, protecting all renters from market whims. Costa-Hawkins mandated that rent control could no longer apply to single-family homes. The law's designers claimed the exemption would help mom and pop landlords maintain an investment property. Instead, it made the single-family market a playground for corporate gambling.

Invitation Homes — managed by Blackstone, one of the world's biggest financial firms with $450 billion in assets — is now LA's primary landlord of single-family homes. Because of Costa-Hawkins, every one of these homes is exempt from rent protections. Tenants have no options but to pay up or leave when faced with rent increases or run-down conditions.

Meanwhile, Blackstone can spend $100 million a week acquiring foreclosed homes — it once bought 3,000 California homes in a day. It even invented a financial instrument to profit from all its rental income: rent-backed securities.  Instead of protecting "mom and pops," Costa-Hawkins has lined the pockets of the biggest corporations in housing.

According to the law, when Californians move out of a rent-controlled apartment, landlords can reset the rent at whatever they want for the next tenant. As rents soar, a target grows on the backs of long-term tenants, whom landlords are incentivized to evict. Harassment, deportation threats and "buyout" scams are some of the means by which landlords accomplish this goal.

Before Costa-Hawkins, Santa Monica had what's called vacancy control – there were limits on how much of an increase the next tenant would get. As a study by Santa Monica's Rent Board has shown, before Costa Hawkins, 82% of that city's rent-stabilized apartments were affordable to low-income households. A decade after Costa-Hawkins, only 14% remained affordable.

Municipal rent control on apartments still exists in many cities, but Costa-Hawkins froze these laws at the year of their passage. For LA, this is 1978. If you live in a building built after 1978, your landlord can raise your rent however much he wants, and at any time. A notification is all that's required for a rent increase: 30 days for a 10% increase, 60 days for more.

Extreme rent hikes have become commonplace. Last fall, Boyle Heights residents were hit with rent increases up to 80%, or $800 a month. Two-hundred families in Westlake recently saw increases of as much as 40%, or $475 a month — to name just two examples.

The state law makes it illegal for Los Angeles and every other California municipality to step in and stop such rent hikes in their own backyards.

But the relative success of LA's limited rent control shows the promise of its expansion.

LA's 1978 ordinance limits rent increases to around 3%-5% a year — this is why even without vacancy controls, Mayor Eric Garcetti compared having a rent-controlled apartment to winning the lottery. As a 2009 report by LA's Housing Department made clear, the ordinance protects tenants from being priced out of their homes when "hot" markets boil. It also gives landlords reasonable returns on their investments as well as allowances to pass on renovation costs.

As rents spike and the unhoused population swells, it's time to repeal Costa-Hawkins and return to local governments the right to deter price-gouging and speculating.

(Tracy Jeanne Rosenthal is a member of the LA Tenants Union. She tweets @xxexegesis. This piece was originally published in the LA Times.) Prepped for CityWatch by Linda Abrams.