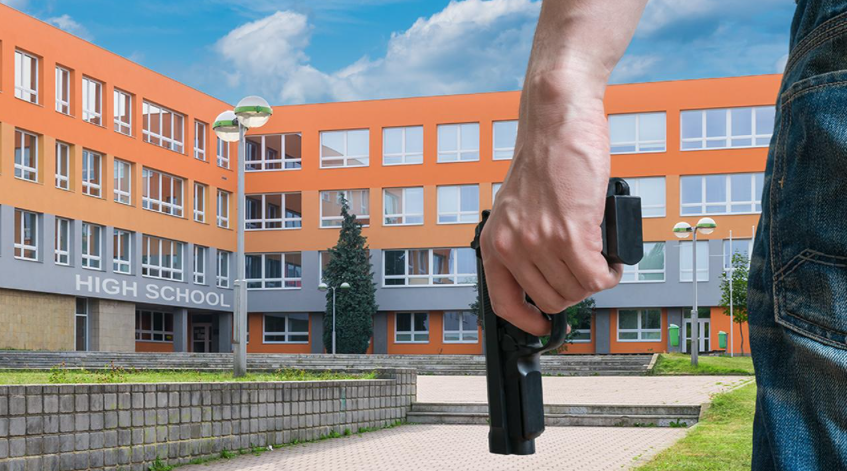 FIRST PERSON-Why is what might be the most effective way of dealing with epidemic levels of school gun violence never even considered? The all too predictable Left-Right polemics on the issue have ignored an otherwise obvious third way forsolving the school shooting insanity.

Just ask yourself a simple question: how much school gun violence is being perpetrated by students who have failed to be engaged in the education process, who have been allowed to pass through grade after grade by way of social promotion, irrespective of whether they have mastered even the most rudimentary academic and social skills taught in prior grade-levels?

How much value do students give their own lives or the lives of others when they have only a 500-word working vocabulary? Students who -- like far too many in middle and high school --- have only a 3rd grade mastery of English and math skills, have encountered an educational process that becomes humiliating once they are young adults. Instead of arriving at a point where they should be at their age, where life has infinite possibilities, they are profoundly depressed by their lack of options or academic abilities to develop and achieve them.

Just look at the academic level of most of the past school shooters. Could their actions have been predicted or avoided by early intervention and appropriate education at their subjective levels? Could education have offered them a positive alternative to going out and shooting their fellow students just to get attention and possibly redress their grievances against society and a system of public education that threw them overboard long ago?

So, what is left for these students? How are they to express themselves in a world that will cut away from the regular daily news to cover a car chase by police or a school shooting? Does the 1st Amendment’s supposed freedom of the press quantifiably increase these violent incidents? This is not 1st Amendment freedom of the press; rather, it is pornography that is "patently offensive. It appeals to prurient interests...and has no redeeming social value." What it does is dominate the "news" because it achieves ratings. Not reporting these incidences, however, it is not the answer. We must instead deal with the underlying failure to educate and engage our students.

While I do question an interpretation of the 2nd Amendment that equates our right to bear arms (something that was defined over two hundred years ago when we only had flintlock rifles) with the right to be able to buy automatic weapons like the AR15, I nonetheless think that Florida Senator Marco Rubio has a point when he argues that making such weapons illegal is like closing the barn door after the cow has escaped.

If you take a page from the violence caused by the never-ending drug wars, it is clear that makingsuch weapons illegal in a country that has only 5% of the world's population but 38% of the world's guns, would only raise the valueof those weapons on a future black market. And let's not even talk about the non-gun technology that now allows individuals to fabricate their own extremely lethal weapons from supposed non-gun parts, which are for sale on the internet.

The Los Angeles Unified School District (LAUSD) continues to irrationally insist that all their students are “going to college,” when the total capacity of all colleges and universities in this country is only 30% of all high school graduates. This is a form of self-inflicted organizational insanity. When LAUSD has a 52% chronic truancy rate, and socially-promoted students who are far below grade-level and are continuing to be humiliated by being asked to do work that they cannot possibly do, it’s surprising that more school gun violence hasn't occurred. I guess we have been "lucky" enoughso far that these purposefully failed students have beenconsiderate enough to take their gun violence off campus... and into the community.

How much less expensive, emotionally and financially, would it be to proactively seek out and engage failing students at their subjective levels with academic remediation and vocational and industrial arts programs? Wouldn’t it be worth it to turn these students toward a positive directioninstead? We need to consider that now…before another Florida-type shooting takes place.