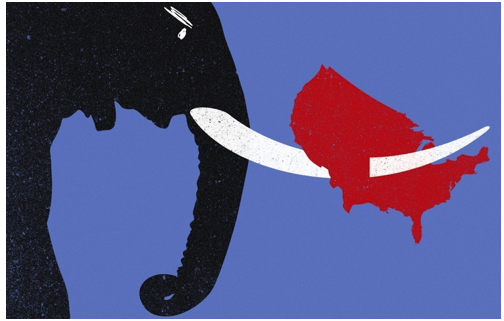 BELL VIEW-Living in Los Angeles for the past twenty years has driven home to me the power of the vote. The first time I supported a Quixotic campaign against an incumbent City Councilmen (and all of mine have been men since I’ve been here), our side got absolutely clobbered – when you looked at the results based on percentages. The incumbent got more than 80% of the vote. But when you looked at the numbers themselves – in the second-largest city in America – the margin of victory looked incredibly thin. Less than 8,000 votes separated victory from defeat.

“You can’t beat the machine,” someone told me as we nursed our wounds over cocktails and Thai food. Machine? I thought. I grew up on the South Side of Chicago – where Mayor Daley used to win by half a million before the polls opened up.

Now I realize Daley got it all wrong. Today’s elections are not decided by those suckers who vote – but those of us who either can’t or won’t.

In LA, politicians hold on to power through sheer inertia. By accomplishing virtually nothing and having the good fortune to be elected in a place where the sun usually shines, politicians in LA have rendered elections virtually meaningless. With voter turnout hovering around 10%, even the most charged-up opposition can’t hack its way through the fog.

On a national level, we have what many people consider a two-party system – where the parties are relatively evenly matched and the mood of the electorate swings from left to right periodically. But the reality is that one party no longer has the ability to win a majority of the votes, but, nonetheless, this party has won three of the last five presidential elections. It was only the sheer charismatic force of Barack Obama’s personality that prevented the Republicans from stealing the elections in 2008 and 2012.

Is there another Barack Obama on the horizon? Greg Palast – the intrepid reporter who has been describing Republican theft of elections since, at least, 2000 – once told candidate Obama that the Republicans would steal 7 million votes. Well then, Obama reportedly said, we’ll have to beat them by 8 million. How much longer can that go on?

The latest battlefront in the quest to ensure continued minority rule of this country is immigration. We’re constantly told that something like 80% of Americans support the Dreamers, and that even a majority of Republicans support a pathway to citizenship. Don’t believe it. Scratch below the surface of any Republican’s principled stand in favor of law and order, and you’ll see the pure power calculation behind their opposition to the Dreamers. The last thing the Republican Party wants is a million new citizens to vote against them for generations.

Of course, the non-white/non-white-supremacist voters in this country don’t need the Dreamers to capture the majority. We already have it. A million new voters on our side of the equation is just another challenge to the Republicans in power to see how many votes they can erase. Voter ID; restrictions on early voting; voter purges; gerrymandering; and restrictions on legal immigration all play into the Republican’s war on democracy itself.

In the end, I think Obama had it right. Greg Palast has been beating the drum on Republican voter theft for decades. (“When someone steals your car, you don’t say my car was ‘suppressed.’”) No one really seems to care. I’ve long given up trying to convince people in Los Angeles to vote. How long will it take before we all give up on America.