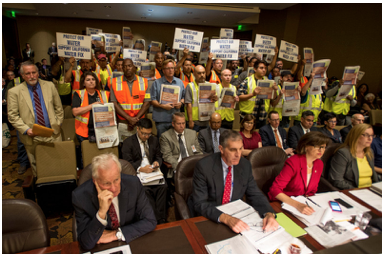 EASTSIDER-After a recent presentation by DWP about the status of remediation of underground water in the San Fernando Valley, I realized two things; first, they are doing a great job at building facilities to remove the underground toxins in these areas from the useful water for us Angelinos, and second, none of these measures are going to directly increase the water supply to Southern California. Which leaves us with a big question -- how do we ensure our water supply in this desert we inhabit?

As I have previously written, Los Angeles and its DWP pays to import most of our water from Metropolitan Water District sources. This is in addition to the water we obtain from the Owens Valley aqueduct, which is owned by the DWP (and was the subject of the movie Chinatown).

After last year’s record precipitation, most of my friends thought that the drought was over and became uninterested in the Delta Tunnels “WaterFix” project. After all, it was going to be expensive for the Metropolitan Water District to participate as a primary contractor, and after some of the big farmers involved in the project didn’t want to pay, it looked like the State was no longer going forward with the Delta Tunnels.

To a large extent, my environmental friends, mostly from up in Northern California, had been very successful in stopping the tunnels. Of course, truth be told, they don’t care about a reliable water source for us in Southern California. Kudos to them and their ability to get even our local environmentalists to oppose the tunnels.

Unfortunately, as this year is demonstrating, most folks don’t understand that ‘Climate Change’ doesn’t mean that it simply gets hotter each year.  It means that we are subject to very large and unpredictable swings in our weather patterns. Witness last year’s veritable deluge of snowfall and rain, followed by this years anticipated shortfall of rain and snow in the mountains. Our local water supply becomes unpredictable and remember that in very dry years we have to purchase up to like 80% of our water from the Metropolitan Water District.

In turn, MWD’s water comes primarily from, you guessed it, the California Aqueduct, which runs from the Delta, in addition to the Colorado River, (where it is limited by interstate agreements as to how much water MWD gets).

In addition to being home to the fish that the environmental community uses to limit the amount of water flowing south to Angelenos, there are a number of other factors which they largely fail to mention.

As CalMatters themselves recently noted, the problems of the Delta Wetlands are dire indeed:

“The report’s findings were unequivocal: Given the current pace of water diversions, the San Francisco Bay and the Delta network of rivers and marshes are ecological goners, with many of its native fish species now experiencing a “sixth extinction,” environmental science’s most-dire definition of ecosystem collapse.”

Now CalMatters is not a great friend of us water gobblers in the South, so you might really want to read the article. It’s sobering. So the truth is that the water supply for the California Aqueduct is already under tremendous stress no matter what.  Further, multiple factors are killing off the Delta, and just imagine what a quake or continued levee collapses could do.

The Place for WaterFix

While my environmental friends very successful lobbying campaign have managed to stop the Delta Tunnels Project, at least for the present, what are the implications for Los Angeles and all of Southern California if the existing California Aqueduct can’t deliver the water to us in the event of any of the emergencies which are likely to happen?

Well, Angelinos have already drastically reduced per capita water use, and it becomes progressively harder to find the next incremental reduction in use. Remember, we live in a desert. The projects to reclaim and remediate water in our basin are not simply capturing rainfall, as happy at that thought might be.  No, most of the “new” water going in the LA basin is the recycling of water already brought here from external sources like the Owens Valley and imported water purchased from the Metropolitan Water District. Think about it.

Politic or not, the largest source for our imported water supply comes from the California Aqueduct.  And as we have seen, that source with or without Delta Tunnels, is under extreme stress as we speak.

What’s the urgency? It’s simple. As I reported in my prior article on the delta tunnels, the project will take a very long time to complete. One tunnel, two tunnels, whatever, the planning and construction of this project is estimated to be about five years in planning and ten years of construction. That’s fifteen years, folks.

If one or more of the numerous events takes place tomorrow that are referred to in the CalMatters article, exactly how are we going to cope? I hate to say it, but it is entirely possible that our Mayor’s version of Metropolis is toast. I guess it’s one way to deal with the affordable housing crisis, but the truth is that Southern California is the economic engine that fuels our State.

In terms of realistically providing a reliable water supply to Angelenos as well as the farmers in the San Joaquin Valley, the most practical solution to date is WaterFix, with all of its issues. And the biggest issue over WaterFix is and has been cost.

Even as big agriculture chickened out, it looks like the state is moving ahead with a scaled back version of WaterFix, involving one tunnel. As the LA Times reported, it is a smaller version of the project, and the 800-pound gorilla is still money.

And opponents of the project, such as Restore the Delta, are quite aware that things are moving forward as well.

So what’s the bottom line? Opponents to the tunnel will never be deterred for their own reasons, and that’s fair. Speaking as a DWP ratepayer, however, I think anything that will keep LA from the risk of going with insufficient water, at a reasonable cost, is a prudent bet.

As the prior studies of the Ratepayer’s Advocate office, demonstrate, the cost per month to DWP ratepayers would be minimal, even under the prior (and bigger) plan. I reported this in a prior article you can read here.

”...the short version is that they estimate an increased cost to DWP customers of $1.73/month for typical single family residential users. That’s based on an average of a wide range of possibilities with a best-case scenario of $0.873/month and a worst-case scenario of $4.31/mo., and their figure includes both the rate increase itself as well as an increase in the MWD property tax we pay.”

With the stock market going up and down like a yoyo, a very safe investment for private sector investors would be ... WaterFix. Seems to me that all we lack is a seriously rich Wall Street type to come to the rescue and make a large capital investment in the future of Southern California and Los Angeles.

Or as I think Little Orphan Annie would say, Daddy Warbucks, whither art Thou?