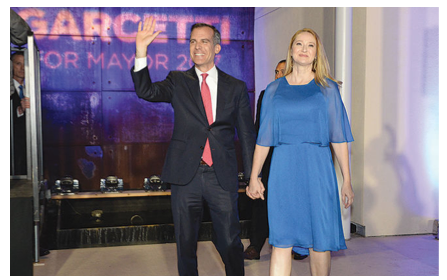 @THE GUSS REPORT-The only thing that presently stands between Los Angeles Mayor Eric Garcetti running for president and his actually doing that is his failure to state that he wants to be president and, also, to answer this question: What is it about your past 17 years (during which you were an LA City Councilmember and its president) that shows you capable of winning the job and doing it well?

We know that Garcetti wants to run for president, as documented by my CityWatch colleagues Eric Preven and Joshua Preven, because he has spent gobs of time away from LA on non-LA business that people who want to be president might pursue.

We also know this because of the false equivalency Garcetti recently proffered on CNN, in which he said that U.S. mayors should run for president and suggested that those who run teensy cities like South Bend and New Orleans would make viable candidates, but that he – as Mayor of LA – is really more of a governor. Except that he isn’t, and never expressed a desire for that job, either.

Perhaps the Mayor needs a cheat sheet on all that he has accomplished as LA Mayor, so that the next time he’s away from LA, he can tell the national media about:

And on and on, like Garcetti landing the 2028 Summer Olympic Games (but not the ones he wanted in 2024); how LA is a sanctuary city, except for the fact the he failed to take a formal stand on the issue; or how he is protecting undocumented citizens and Dreamers from ICE at a time when we are about to see more ICE agents in the city than ever before; how recreational marijuana became legal on January 1 without a formal or official licensing system in place; or his stating that LA would be “No Kill” by December 2017, without explaining where LA’s homeless animals are disappearing to, or what policy he created to supposedly make that happen.

So, Mayor Garcetti, please do LA a favor and stop pursuing your presidential dreams with a “mother may I” approach. It failed for Al Gore and Walter Mondale, who couldn’t make the case for a presidency as sitting vice presidents, but at least they both declared they were running.

If you want to run for president, say so, and do so, and we can move on with someone who wants to be mayor, for better or worse. That would be current City Council president Herb J. Wesson who, given the power of incumbency and voter apathy, would at least serve his term (or terms) to completion.

If not, say so, and come back to LA to start accomplishing things that are more than aspirational or ceremonial, because your second and final term is careening toward its one-year mark with little to show for it, or, for that matter, any of your previous terms in office.

And that would make you the next Antonio Villaraigosa; a former Mayor of LA with nowhere to go but academia.