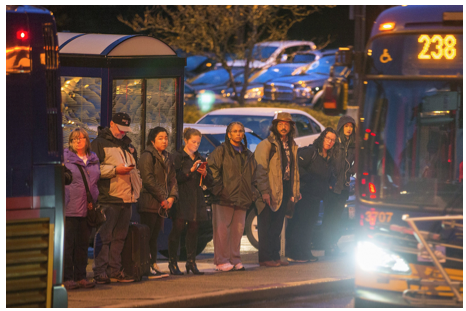 TRANSIT WATCH-An obvious nature of riding transit in Los Angeles is that riders must walk to bus stops and rail stations, wait, then board the bus or train. After reaching the end of their rides, they depart and walk directly to their destinations or make a transfer to another train or bus.

When waiting and walking a rider is subjected to the elements and to all the obstacles the city throws at riders.

In my experiences as a bus and train rider since 1992, there’s one notion that is continuously reinforced: that the City of Los Angeles is clueless, incompetent, or uncaring in making the even the most basic transit experiences be something in which the basic needs, and indeed the rights of transit riders, are honored.

To me, this represents the uncaring side of the City of Los Angeles towards transit riders: it engages in doublespeak -- promoting increased mass transit ridership as its actions actually discourage it.

Since its opening, the complete Expo Line has exceeded ridership predictions and is a boon to transit riders by providing trips much faster than on buses, as well as a higher quality ride. This can be a tremendous selling point in attracting even more riders.

Despite the benefits of the Expo Line, my latest experience shows not only the uncaring attitude from the City of Los Angeles, but a continuing cluelessness of how the transit system works and how it is negotiated by transit riders.

Many times, I use the Sepulveda Expo Station as my starting point and take a Culver City bus on Sepulveda Boulevard to access the station. Approaching the station on the northbound Culver City Bus, the stop is on the sidewalk directly in front of the station entrance. The city makes important decisions concerning the placement of bus stops, and here it was done correctly: for transferring between bus and train the close proximity between the two gives the rider better odds of catching the transfer. This promotes transit ridership.

However, for the Southbound Culver City Bus, the situation is much more difficult. Here, there is no bus stop at the entrance to the west side of the Sepulveda Station. That bus stop is located north at Pico Boulevard, about one-hundred yards away. This distance increases the odds of missing the connecting transfer, putting the transit behind schedule. The lost time is annoying, frustrating, and will cause riders to reconsider the value of riding mass transit in Los Angeles.

This southbound bus stop should be directly in front of the Sepulveda Station, the same as the northbound bus. Yes, this would place the bus stop in a right turn lane, and would cause drivers to stop for the bus at the stop and lose a little time in their travels.

As a long-time transit rider, I have less concern for appeasing drivers and more concern for looking after myself. The vehicles behind the stopped bus can wait. Moving the southbound bus stop to in front of the station would match the other station entrance and would be a tremendous benefit for transit riders.

Why was this not the original situation when the Expo Sepulveda Station opened? Was the City of Los Angeles catering to drivers and ignoring transit riders?

If civil codes prohibit a bus stop in a right turn lane, then there needs to be a covered bus stop immediately south of the station, across Exposition Boulevard in front of the Henry Medina city building. The current stop at Pico also serves the Santa Monica Pico Bus, but ridership numbers between the Santa Monica Bus and the Expo Train would certainly be in favor of greater ridership from the train, and this would favor placing the bus stop as close to the Sepulveda Station as possible.

What happened to me today shows the City of Los Angeles’ complete disregard when it comes to assisting transit riders. After riding the westbound Expo Train, I exited at the Sepulveda Station and used the western elevator as I’ve done numerous times to get to Sepulveda Boulevard, then walked north to Pico Boulevard for the bus stop at the south-west intersection.

However, to keep vehicles on the Sepulveda Boulevard from getting dirty, there was a street sweeper to clean the street, but pedestrian transit riders were forced to walk through dirt and litter on the sidewalk.

But this is not my sole complaint: Today, as I turned on Sepulveda Boulevard in front of the Expo Station to walk to Pico Boulevard, the Sepulveda Boulevard sidewalk was blocked off for the expanding construction site. It was inaccessible, closed-off behind K-Rails and a chain link fence. We were instructed to proceed no further and had to use the other side of Sepulveda Boulevard.

There was no warning sign at the station about this, so this left pedestrian transit riders in the lurch. Those of us needing to get to the Pico Boulevard bus stop were delayed. We had to backtrack to the station street, crossing at Exposition Boulevard, wait for the green to cross Sepulveda Boulevard, walk to Pico Boulevard, and then wait for another green to cross Sepulveda Boulevard again. This adds two more street crossings, wasting time, and causing transfers to be missed. This does not encourage transit ridership.

Indeed, as I stood at the K-Rail obstruction trying to make sense of the situation, the Culver City Bus I wanted drove by, a bus I could have caught had I not been stopped by the obstruction.

Closing off the sidewalk forces pedestrian transit riders to use the other side of Sepulveda Boulevard and wait for a green walk sign to cross Sepulveda Boulevard at Pico to get to the bus stop, increasing the odds of missing the transfer. This places even more burdens on transit riders. Vehicle lanes in this stretch, however, remain unimpeded with no burdens placed upon drivers.

The sidewalk needs to be opened to transit riders. To me, it looks like the city gave no thought to the planning of this situation, no thought to inconveniencing transit riders using the Expo Line Station immediately next to the construction site. This is careless, clueless and uncaring.

This is just one situation, and I am certain that similar obstacles and burdens are thrown at pedestrian transit riders by the City of the Los Angeles throughout the city sprawl.

If Los Angeles is to meet its own goals of increasing transit ridership, it needs a complete reevaluation of its methods, a scouring of its institutional habits and mindset. It must reflect on whether its actions create obstacles and burdens, instead of showing a caring attitude towards transit riders. Until the city changes, whatever it promotes for transit ridership is all double-speak.