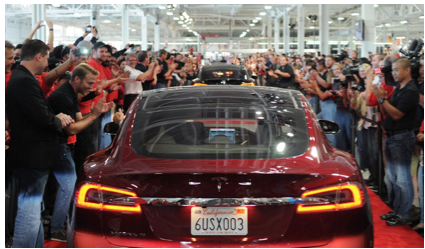 CA LABOR POLITICS-In the waning hours of the legislative session, Democrats pushed through new labor requirements widely viewed as retaliation against Tesla, the electric car maker embroiled in a union-organizing campaign at its Fremont plant.

Labor unions got lawmakers to insert two sentences into a cap-and-trade funding bill requiring automakers to be certified “as fair and responsible in the treatment of their workers” before their customers can obtain up to $2,500 from California’s clean vehicle rebate program.

At the time, Democrats openly wrestled with the concern that the United Automobile Workers, which is trying to maintain its role in the auto industry, makes big bets on electric vehicles -- was expanding its unionization campaign from the factory floor to the Senate floor. Sen. Steve Glazer of Orinda said the state should not “hold our environmental projects hostage to a fight with one progressive employer.” Sen. Connie Leyva of Chino countered that California shouldn’t want companies to succeed at the expense of workers.

Now, with regulators starting to draft the new rules, a lingering question remains. How far will California -- the first state in the nation to approve $15 minimum wage and a state that has set an ambitious goal to put 1.5 million zero emissions vehicles on the road by 2025 -- go in order to graft its blue values onto the green sector?

“In politics, your oldest friends are your best friends,” said Dan Schnur, former head of California’s campaign watchdog agency and now a professor at the University of Southern California. “The tech people may have come to Sacramento with a lot of money and with an agenda that dovetails with the governor and legislators’ policy priorities, but they’re still the new guys on the block. Labor’s been there for a long, long time.”

Now state regulators -- at both the state Air Resources Board and the Labor & Workforce Development Agency -- will hold public hearings and draft rules for certifying automakers who want their vehicles to qualify for California rebates. The Legislature will then need to approve those.

Among the points of contention:

Dean Florez, a former Democratic state lawmaker and a member of the air board, said California can have both labor protections and environmental leadership as the state charts new territory.

“We shouldn’t be using public money to fund or support companies that do not meet basic worker protections,” Florez said. “We shouldn’t undercut the labor protections that we have fought for, for so many years. And I think that there is a danger in doing so; I think we would lose the confidence of the public for environmental leadership in the end.”

California’s new requirement will apply to all automakers, but it couldn’t have come at a worse time for Tesla, a company that prides itself on innovation and disrupting the status quo. When plant workers went public with complaints about low pay, long hours and unsafe conditions, Tesla co-founder and CEO Elon Musk labeled labor’s tactics “disingenuous or outright false.”

While making $17 to $21 an hour is above minimum wage, Tesla employee Jose Moran noted that a living wage in the San Francisco Bay Area is a lot higher -- around $28. Musk responded that Tesla’s compensation package is higher than General Motors, Ford and Fiat when including Tesla’s employee stock program.

The company wouldn’t comment now, beyond referring back to what its policy director Sanjay Ranchod told lawmakers at a September hearing: “The company is committed to protecting the health and safety of its workers, and we are committed to continue and to make progress towards our goal of becoming the safest auto factory in the world.”

As the nation’s newest automaker, Tesla is also on track to be the first to max out on a federal tax credit of up to $7,500 per vehicle. And with its Model 3 sedans pitched as its affordable electric car at $35,000, Tesla will need California’s rebate more than ever to compete against other electric cars such as the Nissan Leaf or Chevrolet Bolt.

Business boosters wonder why the state would single out clean-energy vehicles over gasoline cars for greater scrutiny when 40 percent of the state’s greenhouse gases come from tailpipe emissions.

They worry Sacramento’s pro-labor stance will dissuade companies from locating or expanding in California. Already, Tesla located its first battery factory just outside the state line in Sparks, Nevada.

Politicians say they want good-paying jobs, and to grow manufacturing and reduce greenhouse gas emissions, “and yet, we’re in the ironic place where Tesla is being attacked by some elected officials relative to whether or not their workers are unionized,” said Carl Guardino, head of the Silicon Valley Leadership Group, a trade association representing nearly 400 Silicon Valley employers, including Tesla.

California is home to about 10,000 auto industry workers, virtually all from Tesla. That’s compared to 38,000 in Michigan, 24,000 in Kentucky and 20,000 in Ohio, according to the U.S. Labor Department’s Bureau of Labor Statistics.

Union representatives say the goal is not to slow the production of clean energy vehicles. Rather, they maintain, if taxpayer money is being used to help sell cars, then it’s up to the state to make sure it results in good-paying jobs.

“This is all part of our work at the labor movement to make sure there’s accountability for public investments,” said Angie Wei, an influential lobbyist for the California Labor Federation, the umbrella group for unions including the UAW. “If we’re going to put taxpayer money into it, then we’d sure better be getting something out of it for jobs.”

The union also is trying to maintain its role as the auto industry makes big bets on electric vehicles. Just this year, Volvo and GM announced plans to phase out conventional engines. The union can also use a win in labor-friendly California after losing an organizing effort at a Nissan plant in Mississippi, a right-to-work state.

It’s worth noting the Nummi plant that Tesla took over in Fremont was represented by the union before the joint venture between GM and Toyota closed in 2010.

“It is about Tesla and it isn’t about Tesla,” Wei said. “We had a gas-and-combustion industry that for decades created good middle-class jobs. They’re now being replaced by electric vehicles. This is our new economy, and with major public investment. The question is are we going to allow the auto industry to create and maintain middle class jobs? Or are they going to become the next Walmartization of the economy?”

Sacramento has placed itself at the forefront of cleaning up the environment. Gov. Jerry Brown and fellow Democratic lawmakers have pitched California as a model to the world for reducing air pollution and greenhouse gases that contribute to climate change in direct response to the Trump administration’s anti-regulatory philosophy.

But California has also had a longstanding relationship with labor unions, stepping up the minimum wage and offering access to paid sick and family leave. In recent years, the California Labor Federation has successfully pushed legislation to protect immigrant workers from threats of deportation and expanded authority for the state to go after employers who skirt overtime or minimum-wage laws.

Lobbying reports show Tesla spent $189,237 on lobbying in the 3-month cycle during which the bill was debated, compared to $103,351 for the labor federation. But labor’s might comes also from being able to mobilize its members on issues and during elections.

Democratic lawmakers who struggled to prioritize the interests of two political allies will have more to soul-searching to do next year.

Democratic Sen. Scott Weiner of San Francisco, who has a record of advancing the green economy and supporting prevailing wage to maintain union pay on public works projects, said he was unhappy that the so called “Tesla rule” had been inserted at the last minute. “This is significant and important enough that it should be vetted through a normal legislative process with public scrutiny. That to me is the best way to come to the right solution,” he said.

His fellow Democratic lawmaker and San Franciscan Phil Ting, who chairs the Assembly Budget Committee and authored the measure, insisted it strikes “a good middle ground.”

“We could have said you’re not going to get any money unless your workforce is unionized. That could have been something we inserted. We didn’t,” Ting said in an interview. “Having said that, we also could have done nothing. So if you look at the two extremes where we could done nothing or we could have dictated the type of workforce, I think this is the middle of those extremes.”

Ultimately, the decision to unionize remains up to workers.

Michael Catura, 33, a battery pack line worker who has been at Tesla for nearly 4 years, said he supports joining the union because it would mean a higher wage and seniority for him. As the son of a postal worker, Catura said he has been disappointed that he has been passed over for promotions because supervisors can play favorites. He said he started at $17 an hour and now makes $21 an hour.

Catura has one message for Elon Musk: “I would tell him, ‘Hey man, scratch my back and I’ll scratch yours. Give us more than just a bone.”

(Judy Lin is a staff reporter covering education, pensions and finance for CALmatters where this piece first appeared.) Prepped for CityWatch by Linda Abrams.