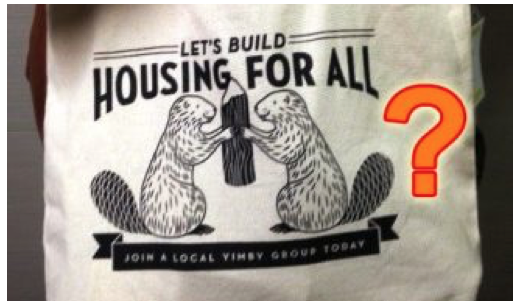 YES IN MY BACK YARDERS ON THE MOVE-Of the fifteen bills in the “housing package” signed into law by Gov. Jerry Brown on September 29, the one that got the most attention in the media was State Senator Scott Wiener’s SB 35—and for good reason: SB 35 goes a long way toward “putting teeth” in California’s Regional Housing Needs Allocations, the number of housing units that each city’s and county’s zoning must accommodate. Moreover, the bill’s provisions for “by-right” approval of certain multi-family, infill developments both circumvent the California Environmental Quality Act and eliminate negotiations with developers over community benefits.

But two other items in the package, SB 167 and AB 1515, that either got much less publicity (SB 167) or virtually none at all (AB 1515) will likely do much more damage to the democratic governance of land use in the state. Both amend California’s Housing Accountability Act, a once-dormant law now being exploited by Bay Area YIMBYS.

Passed in 1982, the HAA limits the ability of local agencies to reject or make infeasible housing developments without a thorough analysis of the economic, social and environmental effects of such action. It applies to all housing projects. Most important, the HAA allows a court to compel a city to take action on proposed developments.

Analyzing AB 1515 for the State Senate Rules Committee, Senate staffer Alison Hughes observed that when a jurisdiction is sued under the HAA,

the local government bears the burden of proof that its decision has conformed to all of the requirements in the law, including, if applicable, any findings that the development was not consistent with the city’s general plan or zoning standards. ...

[I]n order to qualify for the Housing Accountability Act’s protections, a development must be consistent with a city’s general plan and zoning standards in effect at the time that the application was deemed complete. In land use cases, when the issue is such consistency, courts have tended to defer to local governments, unless the court finds that the local government acted arbitrarily, capriciously, or without evidentiary basis.

In legalistic terms, a local government’s decision would be upheld unless no reasonable person could have made the same decision—a very high bar. AB 1515 effectively lowered the bar to the ground.

AB 1515, Hughes explained, “requires courts to give less deference to a local government’s consistency determination. It changes the [evidentiary] standard of review by providing that a project is consistent if there is substantial evidence that would allow a reasonable person to find it consistent.”

AB 1515 was sponsored the California Building Industry Association. The Legislature staff analyses list only one opponent: the California chapter of the American Planning Association. Given that professional planners are usually avid proponents of development, Cal APA’s opposition is striking.

In a letter sent to the members of the Legislature on August 1, Cal APA laid out the harm that AB 1515 does to democratically accountable land use policymaking:

Under current law, a city council or board of supervisors weighs the evidence and reaches a decision based on established principles of democratic decision-making—local governments are ultimately held accountable for their decisions by the local electorate.

AB 1515 would replace the judgment of local elected officials with that of any "reasonable person," including the project developer who has a fundamental economic interest in the project. When fundamental land use decisions, like general plan consistency, are made by developers rather than elected representatives, local government accountability is compromised and the recourse available to the electorate is taken away.

AB 1515 will allow the applicant, rather than the local agency or a judge, to determine consistency of a development with the General Plan and zoning by allowing the applicant to provide contrary reasons why the project is consistent.

As a result, the issue will be whether a “reasonable person” could conclude that the project is consistent—not whether the city or county had substantial evidence to back up its conclusion.

Under this bill, a project would have to be found consistent with local plans if there's any evidence or interpretation supporting a finding of consistency, regardless of circumstances and evidence to the contrary.

The existing standard is that the local agency’s finding is assumed to be correct unless no reasonable person could reach that conclusion. This [standard] retains the “reasonable person” phrasing in the bill but does not allow developers to begin making what are clearly local determinations, or to take a local agency to court over every finding.

Cal APA asked that AB 1515 be amended to read: “the local agency’s finding is assumed to be correct unless no reasonable person could reach that conclusion.” Request rejected.

The Legislature approved AB 1515 on September 15. On September 19, the League of California Cities sent Gov. Brown a letter requesting him to veto the bill. Like the APA, the League argued that AB 1515 “would deviate from longstanding judicial precedent” that generally deferred to local determination of a project’s consistency with a jurisdiction’s planning.

But whereas the APA held that the bill authorized developers to begin making such determinations, the League contended that it

would essentially allow a court to determine whether a project is consistent with local zoning and general plan [sic] by selecting the substantial evidence it wishes to rely on rather than reviewing whether the city council relied on substantial evidence.

Instead, the League wrote, “[l]ocal governments are in the best position to determine whether a project is consistent with adopted general plan and zoning requirements.”

The Yimbys Seize on the HAA

But the Yimby support for AB 1515 is particularly notable.

To begin, the California Renters Legal Advocacy and Education Fund or CaRLA, self-described as “the legal advocacy arm of the Yimby Party,” qualifies as a “housing organization” that can sue cities under the HAA. The law that made housing organizations eligible to sue under the HAA, AB 2584, is one of the eleven bills listed on the Yimby Legislative Report Card for the California Legislature’s 2016 session.  Like AB 1515, AB 2584 was authored by Assembly member Daly.

Developers are reluctant to sue a city, because they are constantly negotiating with city officials over their projects. The Housing Accountability Act allows a developer’s surrogates to do the dirty work by authorizing as plaintiffs not only a project applicant but also a person who would be eligible to apply for residency in the development, and a housing organization.

As state staffer Rebecca Rabovsky wrote in her analysis of AB 2584, previously “only the project developer or an eligible tenant of the proposed development [could] bring an action against [a] jurisdiction to enforce the provisions of the HAA.” HAA added a “housing organization” to the roster of prospective plaintiffs.

As amended by AB 2584, HAA defines a housing organization as

a trade or industry group whose local members or primarily engaged in the construction or management of housing unit, or a nonprofit organization whose mission includes providing or advocating for increased access to housing for low-income households and have filed written or oral comments with the local agency prior to action on the project.

None of these lawsuits concern affordable housing, and two of them don’t concern much new housing of any sort. The Lafayette case involved 44 single-family homes. In Berkeley, the issue was whether an existing single-family home would be demolished and replaced with three single-family units. In Sausalito, the city has denied an application to demolish and remodel a duplex and add a new single-family unit.

Like AB 1515, SB 167 weakens local authority over land use decisions by changing the evidentiary standard for determining whether a proposed development is consistent with a jurisdiction’s zoning. The change is different, however. AB 1515 makes it much easier to challenge a city’s disapproval of a project by lowering the standard of evidence for mounting such a challenge. SB 167 makes it much harder for a city to disapprove a project in the first place by raising the standard of evidence for such a disapproval.

SB 167 also increased the size of fine that a court can impose on a city. If a court finds a violation of the HAA, SB 167 requires the court to impose a fine in a minimum amount of $10K per housing unit (in the Yimby first draft of the bill, the fine was $100K per unit). Money cannot be paid out of a fund already committed to affordable housing. Fines go into an affordable housing trust fund with the sole purpose of financing newly constructed housing units affordable to extremely low, very low, or low income households.”

And if a court finds that a city acted in bad faith when it rejected or conditionally approved the housing development or failed to carry out the court’s order within 60 days, the court must multiply the fine by a factor of five.

The YIMBYS and other stalwarts of the California growth machine cast growth-resistant communities as a mighty political force. Yet AB 1515 and SB 167 made their way through the Legislature without grass-roots protest. That history suggests that the growth entrepreneurs’ portrait of a Nimby juggernaut is a caricature whose main purpose is to justify the machine’s ongoing assault on local authority over land use.

(Zelda Bronstein, a journalist and a former chair of the Berkeley Planning Commission, writes about politics and culture in the Bay Area and beyond. This piece was first published in The Marin Post.) Prepped for CityWatch by Linda Abrams.