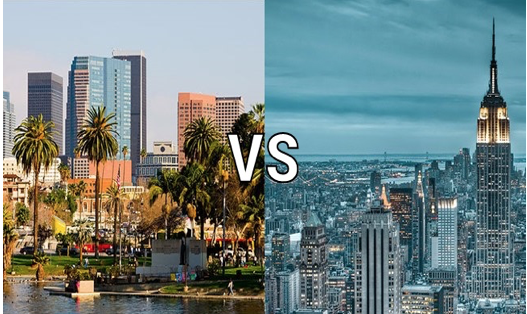 DEEGAN ON LA-Iconic skyscrapers, a symbol of modernism, dominate New York’s Manhattan skyline and define its signature style. This came to be called the “International Style,” one that used a formal arrangement of glass and steel -- the newest building materials that came into use mid-century -- when Manhattan experienced a post-World War II building boom. Here in Los Angeles, though, the predominant architectural signature style is Spanish stucco with red tiled roofs.

Is it time now to alter that perception with a new LA building style as the cityscape inevitably pivots from its low slung, horizontal hacienda look and features collections of tall vertical towers along our major streets?

Are we saturated with the ubiquitous yet charming casitas-type homes that were built about 100 years ago? This regional style dates back even further to the romantic, nostalgic imaginings of the “Californios,” the resident Mexican-Californians who lived in what is now Southern California before it was even a U.S. Territory. They and their ranchos and haciendas have been romanticized and have remained a visible part of Southern California’s history, as highlighted by former state Librarian and scholar about California, the late Kevin Starr, in his book, “California: A History-Kevin Starr.”

The big difference between Los Angeles and Manhattan is that Manhattan’s signature style relates to office buildings, while LA’s refers to family homes. But now we are experiencing a shift in development away from single family homes, duplexes, fourplexes and small apartment buildings, to increased density with the building of towers along transit routes that provide mixed use retail and housing all together.

This is where we have a chance to not be like Manhattan, with its overabundance of International Style architecture. It became so prevalent in this country that you could get off a plane and not know what city you were in because every city looked the same. The problem with an overarching style is that it eventually goes out of style. We have a chance to create our own new signature style, reflective of the great diversity of Los Angeles as a world city. Our look could become as diverse and unique as we are. It’s hard right now to know exactly what LA’s unique style will become, but whatever it turns out to be, there will be a lot of it, as Los Angeles slowly morphs into a tower town.

A generation or two from now, the neighborhoods we know and love today may be turned into cocooned, discreet oases in a very changed cityscape. Eventually, we will learn who will be our architectural equivalents of the International Style architects -- that famous group of International Style designers which included Walter Gropius, Le Corbusier and Mies van der Rohe. Richard Neutra and Philip Johnson have also been identified with the International Style for some of their work.

LA will someday be well represented by architects who will become household names. Hopefully, we will give more prominence to our home-grown designers from Los Angeles’ architecture programs at SCI-Arc, UCLA and USC, as we also welcome others from outside the U.S. who may be eager to have their international work showcased here.

But, what do we do about what we have now, while we wait for the future to be delivered?

Valid cries against mansionization -- a trend that has ripped an ugly scar through many otherwise charming neighborhoods -- have had the collateral effect of activating communities to fight back against development, forming an almost guerrilla-like resistance movement using social media protests and stakeholder comments at public hearings; these actions have often gotten results. That energy can be transferred into communities as they start to pay closer attention to protections like “community design overlays,”  that can hold any variations by city planners to rigorous design standards. This is a viable method of controlling what a neighborhood looks like; and, creating CDOs where none exist can be a form of neighborhood protection. There are currently 12 CDOs and 272 neighborhoods, so there is plenty of opportunity to set boundaries and standards before being engulfed.

To remain in the conversation, a community must make a nuanced shift from “not in my backyard” to a more elastic stance of “this is what’s acceptable in my backyard.” Then they must back that up with a Community Design Overlay (CDO), an Historic Preservation Overlay Zone (HPOZ) or Historic-Cultural Monument (HCM) status as the city around them changes its look.

But, what about the “blackout” that could come when sunlight is blocked by tall shadow-causing structures? Will they take away the region’s most popular climatic attraction -- an abundance of bright sunshine practically every day? Will this daily luxury be impacted by hulking towers? This is a looming issue, especially as the city formalizes its TOD (transit oriented design) policies.  It’s probable that our major streets (Boulevards referenced as Major Highways) and Avenues (referenced as Secondary Highways) in the city’s Complete Streets Manual and the Complete Streets Design Guide could become like Manhattan with dark canyons running north-south and east-west.

That darkness should concern everyone. How to capture and diffuse the natural light through innovative building designs will be the challenge.