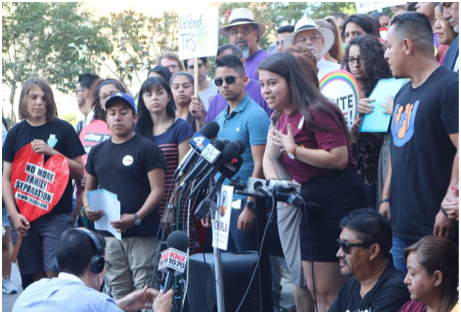 GUEST WORDS-We are living in a state of constant and overt racism under this administration. Still reeling from the decision to rescind DACA, upending the futures of over 800,000 Dreamers, it is our obligation as a society to look toward other ways to provide sanctuary for our undocumented brothers and sisters. There are two key areas we need to focus on — creating sanctuary workplaces, and passing sanctuary policies at the statewide and city level.

With regard to sanctuary workplaces, employers have a responsibility to protect those who make their businesses a success, and to take a stand against anti-immigrant attacks facing working people today. This vitriol — in addition to being repugnant — impacts the economy, which we know is dependent on immigrant labor, particularly undocumented workers.

In February, the Los Angeles Chamber of Commerce released a study on the immigrant contribution to LA’s economy and workforce. The findings showed that:

Data illustrates the economic motivations behind sanctuary, and we must also acknowledge our ethical duty. Businesses are seeing the impacts of ICE roundups and deportations as employees disappear, and our long-time labor allies are taking a stand.

Ron Herrera, the secretary-treasurer at Teamsters Local 396 in Los Angeles, recently shared how the Teamsters are working to protect members who are DACA recipients.

It was a point of pride for his union to secure clauses in their sanitation contracts guaranteeing workers a grace period for dealing with any snags that come up with their work papers. The contract assures that, so long as they can eventually clear up the problem, the workers won’t lose their jobs or their seniority while they deal with immigration officials.

Unite Here is creating more tools for immigrant members across the country, including a ringtone in Spanish with instructions on immigrants’ rights when ICE comes to their door. Several locals are using contract language to protect immigrant workers, and their:

…strategy includes getting employers to agree not to allow immigration officers onto a job site unless they have a warrant, and also promise not to do ‘self-audits’ of employees’ immigration paperwork unless the government forces them to. The union also wants employers to agree to contribute money to assistance funds for undocumented workers who lose their jobs.

Other unions and employers can take additional steps to provide protections. Companies and nonprofits should have a plan in place for how to respond in the case of a workplace raid. They should develop systems to keep worker documentation offsite. They should also consult with immigration attorneys to offer legal clinics for employees.

When it comes to city and statewide policy efforts to advance sanctuary, California has made us proud. SB 54, the California Values Act, sponsored by Senate President pro Tem Kevin de León, passed in Sept. with a 27-11 vote along party lines, and was signed into law Oct. 5 by Gov. Brown. This legislation prevents state and local law enforcement from aiding federal immigration agents  unless someone is convicted of a certain category of crimes.

Other efforts in California that were recently passed and signed into law include two bills sponsored by Assemblymember David Chiu. AB 291, the Immigrant Tenant Protection Act, and AB 450, the Employment regulation: Immigration Worksite Enforcement Actions Act, mandate immigrant protections in rental housing and at work.

My organization, LAANE (Los Angeles Alliance for a New Economy) proudly took part in efforts to advocate for sanctuary in Long Beach. In September, the Long Beach City Council voted to become a sanctuary city. As a result:

... the Long Beach Office of Equity [will] collaborate with immigrants’ rights organizations and the city’s three educational institutions to recommend a local policy, dubbed the Long Beach Values Act.

While California is leading, other states are making progress on sanctuary policies. CNN reports that:

We must continue efforts to advance workplace and city and state sanctuary policies. The most pressing fight, especially with the rescinding of DACA, is the push to pass a clean DREAM Act. This piece of legislation will provide undocumented youth a pathway towards citizenship without contributing to additional border enforcement and immigrant criminalization. We encourage our readers to sign this petition and call your elected officials in Congress, encouraging them to vote in favor of the DREAM Act. Together, we can make a difference.

(Roxana Tynan is Executive Director of Los Angeles Alliance for a New Economy (LAANE) and a contributor to the Huffington Post where this piece originally appeared.) Prepped for CityWatch by Linda Abrams.