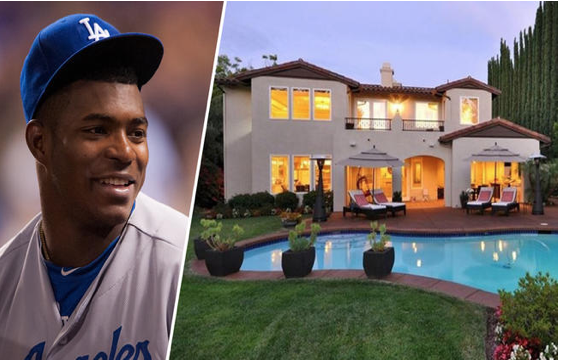 @THE GUSS REPORT-Does the star-struck LAPD reserve its resources for celebrities rather than perform its duties evenly and for all?

Last week, as the Dodgers were virtual no-shows in Game 7 of the World Series at Dodger Stadium, enigmatic outfielder Yasiel Puig’s new mansion in Encino was robbed, much like his comparably immense home in neighboring Sherman Oaks was robbed a few months earlier. The haul from both incidents is rumored to be worth as much in cash and jewelry as a small condo in the area costs.

In both instances, as KCBS’s Dave Lopez reported, Puig got an immediate response from the LAPD, including what appears to be the same detective in both incidents, coincidentally decked out in Dodger World Series swag.

Meanwhile, at a 108-unit condo in Sherman Oaks, which has been burglarized at least a half dozen times over the summer, the LAPD won’t even take a report. (My reporting on those burglaries is linked in four articles at the bottom of today’s column.)

“Property crimes just don’t get the attention they deserve,” an LAPD detective told me earlier this summer. “The majority of our resources are spent on violent crimes in other areas of the city,” he explained.

Except, apparently, if you’re rich and famous like Yasiel Puig.

Two days before the latest Puig burglary, two more perps were captured on video at the condo.  The LAPD has refused to come, and won’t even take a report when its front desk was visited.

That makes the LAPD give / don’t-give-a-damn score Yasiel Puig 2, and Regular People 0.

In fact, the LAPD knows the exact identity of at least one of the earlier Sherman Oaks perps because, as a detective told me last week, she is in federal custody on mail theft charges and could, if she hasn’t already, provide the names of her accomplices, though there doesn’t appear to be enough glamour for the LAPD or City Attorney Mike Feuer to pursue those cases. We know this, because the LAPD refuses to write crime reports for the condo burglaries.

How does that happen? Is it LA Mayor Eric Garcetti’s fear of worsening crime statistics…the LAPD’s embrace of Puig and others with celebrity status…or both?

Last month, David Ryu, the area’s LA City Councilmember, falsely claimed that Van Nuys-based LAPD Captain Lillian Carranza makes sure that all burglary complaints are addressed. But Ryu apparently left out the qualifying statement “...provided that you are sufficiently famous.”

After some public shaming of the LAPD, Ryu and Carranza on social media, a detective finally reached out regarding the earlier burglaries, in which the perps’ face was captured by security cameras. It’s better late than never, but this also furthers the long-held belief among some that the LAPD is star-struck and doles out resources accordingly.

Earlier articles on this subject are linked below:

June 26:   “LA’s Approach to Fighting Crime in the Valley: Do it Yourself”