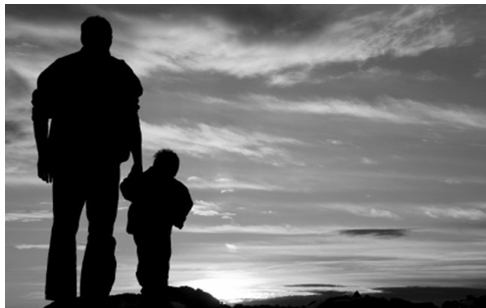 BELL VIEW--My dad died a couple years ago. Something about the South Side of Chicago – where he grew up and spent his entire life – breeds a certain toughness into you. He had stamina. I’ll give him that. On Wednesday of the week he died, he was out mowing the lawn; on Thursday, he collapsed in the bathroom; on Friday, he died from stage four cancer of the lungs, liver, pancreas, and bones. The only complaint he ever had was a little back pain.

When I gave his eulogy, I wondered what to say about him. I barely knew him. My dad worked all the time when I was a kid. He would leave early in the morning – before I got up – and work till late at night – after I went to bed. As far as I knew, my dad used to go to work for days on end. I have no memories of my dad reading to me, or playing catch, or just hanging out. I’m sure we did those things, I just don’t remember them.

Now I’m raising two boys of my own: two future white men. They’re tough little guys too – like their grandpa. And I’m terrified they will never know me. Terrified they will drift away from me the way I drifted away from my own father. I don’t know whether my father ever felt this great sense of loss I feel every day as my kids grow up and away from me. I don’t know whether he struggled against the traditional, stoic, stiff-upper-lip role of fathers the way I do. I didn’t know him. Not that way. I know he struggled, and I’m grateful to him for that. I just wish I could have known him in a different way.

I’m jealous of mothers and daughters walking down the street holding hands as adults. How much longer will my sons reach out for my hand? Each time they do it, I cling to them like a drowning man.

Masculinity is under attack. And I think it’s about time. It’s not my place to speak to this #me too moment. Suffice it to say that every woman I have ever known has been brutalized by toxic masculinity. But torture dehumanizes both the victim and the perpetrator. We know this for a fact.

Those clinging to the traditions of stoic masculinity suffer from a kind of Stockholm Syndrome they can’t even recognize. Their wives, daughters, sons, fathers are repelled by a violent, brutal tradition that equates tenderness with weakness and vulnerability with betrayal.

Reconciliation requires a revolution. Not just confession, not just forgiveness, but concrete action to dismantle the edifices of oppression and brutality. I’m not saying we have to stop going to Clint Eastwood movies. But unless we blow up this image of masculinity that teaches us that winners take all and losers show their true selves, it’s not just our daughters who will suffer, it’s the whole world.

My two boys are absolutely innocent of everything that’s come before them. They’re privileged and lucky – and for that, they’ll have something to answer for when their time comes – but they don’t deserve to be frozen out of real connections to people – men and women – by some toxic myth handed down through the generations.

Why do so many in this country cling to the wrong things? Columbus. The Confederacy. The 1950’s. Nuclear Weapons. Coal. Football. Maybe at least we can all agree that the long tradition of the powerful man grabbing whatever he wants needs to come to an end. Or can we?