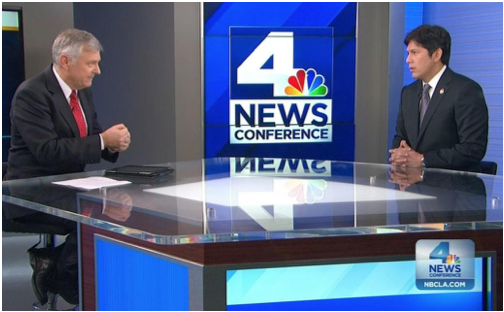 Dear Senator de León-We are writing to you to express our deep disappointment regarding comments you made recently on ​News Conference hosted by Conan Nolan. In talking about the California ​L​egislature’s recent attempts to deal with the housing crisis, Nolan made the claim that Neighborhood Councils (NCs) are somehow obstructing the construction of affordable housing. Allow us to quote your response …

"You're making reference to NIMBYism, of course, Neighborhood Councils, whether it's in Los Angeles or elsewhere, they're gonna stop any type of project if they don't like that project.”

This statement is not only insulting, it reveals a disturbing lack of understanding of LA’s NC system and the development process in general. The members of United Neighborhoods for Los Angeles (UN4LA) would like to offer the following information for your edification.

The Neighborhood Council system was created by the Los Angeles City Charter. There are currently 97 NCs throughout LA, made up of elected stakeholders who give their time to work on issues affecting their communities and the City-at-large. They are engaged in a wide variety of activities, including disaster preparedness; public art projects; sponsoring events for youth and children; health and safety education; expanding access to parks; and a range of other endeavors. They do all this without compensation, many of them spending hundreds of hours per year, with the goal of making Los Angeles a better place to live.

Yes, Neighborhoods Councils also review and comment on ​projects that require some form of discretionary approval by the City. But your claim that “they're gonna stop any type of project if they don't like that project,” shows how sadly uninformed you are about the NC system. In reality, they have no power to stop anything at all. They are advisory bodies​,​ and their input cannot make or break a project. The Department of City Planning has often voted to approve projects that were opposed by NCs.  Your comment quoted above completely misrepresents the reality of the situation, and gives a wildly inaccurate picture of Neighborhood Councils and how they function.

It is also disturbing that you apparently believe NCs are synonymous with NIMBYism. The word “NIMBY” is a derogatory term thrown around frequently these days by developers and politicians to disparage anyone who objects to a project for any reason. It has become commonplace to blame so-called NIMBYs for the housing crisis, with many claiming that the housing shortage has been caused entirely by self-centered, shortsighted people whose only concern is protecting their property values.

But the members of the UN4LA board know many people who serve on NCs, and some of us have also served. Our experience is that the vast majority of NC members are dedicated, unselfish people who have volunteered to spend hundreds of hours serving their communities. Yes, they sometimes oppose projects, and you might be surprised to learn that in many cases they have legitimate concerns, including the loss of rent-stabilized housing, inadequate infrastructure, overstressed public services, safety issues, reduction of open space, and the destruction of our urban forest.

While you dismiss these people as NIMBYs, if you were to take the time to look closer, instead of calling out the stereotypical suburban homeowner looking to preserve property values, you might find people who are deeply concerned about the negative impacts that reckless development is having in terms of displacement, damage to the environment, and overburdened public services. You might also find people who actually work in the field of real estate and development. Do you include them among the ranks of obstructionist NIMBYs who are opposed to new housing? It is depressing for those of us who have served on NCs to have our efforts disparaged by someone who should know better than to make such sweeping generalizations.

We do thank you for your honest account of your interactions with hypocritical politicians who say one thing to the public and then pursue another course behind closed doors. Of course, we're well aware that some of them are dishonest, but it’s refreshing to hear someone from the State Legislature openly acknowledge that there are people on the City Council who we simply cannot trust. They tell us they want to preserve affordable housing, and then approve generous entitlements for developers who demolish RSO units. They tell us they’re planning transit-oriented development, and then approve luxury skyscrapers designed for a demographic that's more likely to drive expensive cars. They tell us they want to create healthy communities, and then dump liquor permits on neighborhoods that are already awash in alcohol, and where violent crime is rising.

In public our elected officials tell us they're working to make the City a better place. But we see the results of the policies they're actually pursuing behind closed doors: housing prices keep climbing, evictions are rampant, homelessness is skyrocketing, crime is spiking, and congestion is worse than ever. The only thing going down is transit ridership, which is lower than it was 30 years ago, in spite of the fact that the County (the area served by the MTA) has added over a million residents during that period.

We feel you owe LA's Neighborhood Councils an apology. Your inaccurate and insensitive remarks have offended many of the people who give their time and energy to make Los Angeles a better place. The citizens who serve on our NCs don't expect to be rewarded, but they deserve to be respected. By lumping them all together and dismissing them as selfish NIMBYs out to sabotage development, you have done them an injustice. You have wronged them.

And beyond an apology, we hope that before the legislature reconvenes you will think more deeply about your efforts to "reform" the development process. Many community members were angered by the passage of SB 35, which will prevent them from having a voice in the debate over some projects. The spectacle of you and Senator Scott Wiener celebrating this “accomplishment” was baffling to those of us who have seen the damage done by reckless development. But it now becomes clear that in your view we are simply selfish NIMBYs, and that you believe shutting us out of the process is a necessary part of your “reform” agenda.

Before the next legislative session begins, we hope you will take the time to educate yourself about LA’s Neighborhood Councils, the people who serve on them and the many ways they help the community. We hope that as you work to shape your legislative agenda, that instead of crafting bills that reduce public participation, you will think about the importance of maintaining and possibly encouraging greater public participation in the development process.

In your appearance on News Conference you said, "We have to work together if we're going to deal with this housing crisis." UN4LA strongly agrees with this sentiment, and we believe the vast majority of Neighborhood Council members would also agree. We would love to work together with you -- if you’ll allow us.

(Casey Maddren is President of United Neighborhoods for Los Angeles (www.un4la.com), a grass-roots group that believes in empowering communities to plan for their future. Questions and comments can be directed to: [email protected].) Prepped for CityWatch by Linda Abrams.