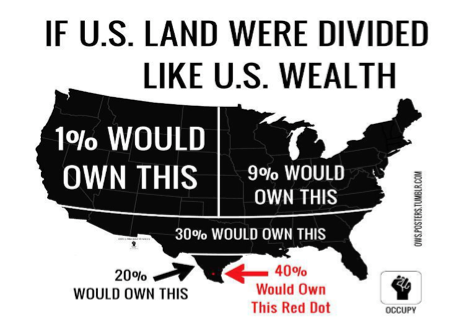 PLATKIN ON PLANNING-As our illustrious President tries to bamboozle the American public into believing that his back-of-the-envelope tax and health plans  -- that allow the rich to get even richer  – will actually lift the income of working people, it is hard not to think about ever growing economic inequality in the United States.

After all, the United States now has levels of wealth and income inequality not seen in over a century, and the U.S. is also one of the most unequal industrialized societies on the entire planet. Compared to the 30 most developed countries in the world, the U.S. ranks 23rd.  And, according to Fortune magazine, the United State is both the richest and most unequal among affluent countries.

Furthermore, compared to other U.S. cities, Los Angeles has become one of this country’s inequality capitals. The data on LA tell a very dismal story. According the Los Angeles Business Journal, LA ranks #7 out of the 150 largest metropolitan areas in the United States in terms of income inequality. In other words, 143 U.S. cities out of the 150 are doing better than Los Angeles.

Looking at this distressing data, many people just shrug it off, considering wealth and income inequality to be part of the natural order, like gravity. Some even go a step further and attribute economic inequality to inherent personal and group traits, such as genes or a “culture of poverty.”

But, these self-serving explanations are wrong. Economic inequality is a logical outcome of public and private sector policies and practices. Inequality does not just happen on its own, rather it is systematically produced.

While other analysts, like the New York Times, are already dissecting Trump’s tax and medical proposals for their added increment to inequality, my focus is local. According to UCLA Professor Paul Ong, economic inequality in Los Angeles is getting worse, in large part because of the increased rent burden on Angelinos. More precisely, in LA County the poverty rate is now higher than it was in 1990, two years before the 1992 Civil Disturbance. Furthermore, when Prof. Wong broke his analysis down to neighborhoods that experienced the most damage in 1992, most of them now have higher poverty rates than they did 25 years ago. Presented differently, the top 1 percent in Los Angeles has 30 times the wealth of the bottom 99 percent.

Sometimes the City Council simply hands over cash, in various forms, to large developers, such as the Anschutz Entertainment Group (AEG). For example, when Jan Perry ran for Mayor in 2013, she boasted that she was able to obtain over $500,000,000 in benefits for developers, mostly AEG, in her downtown Los Angeles District.

These lucrative goodies take many forms:

One of the other major ways that City Hall fosters greater inequality in Los Angeles is through programs that increase the market value of commercial real estate with little cost to the owners and investors. Faced with the dilemma that parcels all over Los Angeles are now worth far more to investors than the people who live on them, the City Council has conjured up many approaches to assist developers to tap the potential market value of these parcels, but with (unintended?) impacts to residents. While neighbors may not like a new coffee shop in Boyle Heights or a new Beverly Grove McMansion replacing a quickly bulldozed home, City Hall has systematically accelerated these changes in a myriad of ways, some old and some new. These include:

Lax Enforcement of Building and Zoning Codes:  The weak link in the entire land use regulation process in Los Angeles is the Department of Building and Safety (LADBS). Due to sympathies for real estate speculation set by its management and reinforced by staffing issues, LA residents constantly complain that LA’s planning, zoning, and building laws are routinely gamed by developers. They also repeatedly report that LADBS ignores their complaints about code violations, except when local residents make enough noise to force a LADBS inspector to undertake an investigation. In these rare cases, projects almost always get a thumbs-up, and it is rare in Los Angeles that a project will be stopped because of code violations. As for projects where LADBS has forced developers to rebuild or demolish illegal structures, I invite readers to send me their addresses since I don’t know of any.

Spot Zone and Spot General Plan Amendments are usually obtained through pay-to-play at City Hall. Developers can still regularly obtain lucrative waivers for individual parcels by carefully targeted contributions to elected officials. Measure S would have stopped this soft corruption, but big real estate firms spent over $15 million to successfully defeat the initiative. As a result, these unethical business practices have not missed a beat at City Hall, where real estate developers and their lobbyists continue to rule the roost.

Community Plan Updates cumulatively constitute the Land Use Element of LA’s General Plan.  While the plans themselves consist of long-term goal and policies, their associated implementation programs include increases in building intensity and population density through parcel and block level zone changes, height district changes, and General Plan Amendments. These appended ordinances amount to free zone changes for developers, which, in turn, allow them to fatten their wallets by either flipping properties or building larger, more profitable by-right structures.

Re:code LA is a five-year, $5,000,000 program to rewrite the zoning sections of the Municipal Code.  Its primary approach is called form-based zoning, which expands the list of permitted uses allowed at existing parcels. Its implementation will be gradual, and each ensuing zoning code amendment will eventually enrich property owners, whether they choose to flip their properties for quick and immediate profits, or hold-on to them to build and operate new and larger real estate projects.

Streamlining involves expediting the processing of discretionary zoning and planning applications, including any related environmental reviews and clearances triggered by the zoning and/or planning request. By decreasing review times, developers reduce their carrying costs and, therefore, bump up their profits at the expense of local residents.

Transit Priority Areas (TPAs) are elaborate rezoning ordinances located at subway and light rail stations. Unlike efforts in other cities to upgrade local transportation infrastructure at these locations, such as new pedestrian sidewalks and bicycle lanes, or to build Kiss ‘n Ride and Park ‘n Ride, TPA’s only have one purpose. They make it easier for real estate investors to build by-right mixed use and apartment buildings near transit stations. Since nearly all of these units are market rate, there is little chance that many of their new and well-off tenants will be riding the rails, except when their BMWs are in the shop.

This list is hardly definitive, and you can, therefore, count on future CityWatch columns to spell out other ways (e.g., increasing appeal fees) in which City Hall enriches real estate investors, jeopardizes local residents in the process, and, therefore, does its part to increase wealth and income disparities in Los Angeles.

(Dick Platkin is a former LA City Planner who reports on planning-related issues in Los Angeles for CityWatchLA. Please send any comments or corrections to: [email protected].)  Prepped for CityWatch by Linda Abrams.