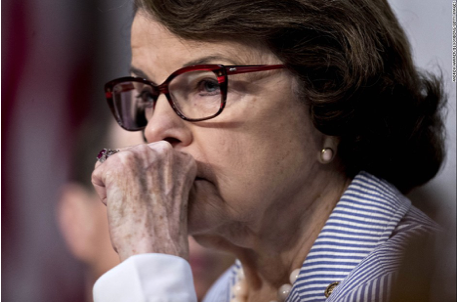 We don’t doubt the polling finding from the Public Policy Institute of California, released tonight, showing that 50% of likely voters say Democratic U.S. Sen. Dianne Feinstein should not run for re-election, versus 43% who say she should. But we doubt it means much.

At 84, Feinstein is not only older than the Golden Gate Bridge (as we’ve repeatedly, if churlishly, noted before), she’s an old-fashioned moderate, a throwback who believes in compromise and genuine legislating, in an era when left-liberal Democrats and flavors of the week, like Kamala Harris, are making all the noise. And, oh yeah, Feinstein’s actually, you know, effective, plugged in and a power with which to be reckoned on Capitol Hill.

Which is why it would be a bad bet to think Feinstein can be beaten, assuming she wants to run again. And, for the record, we chatted with her at a social event recently, and came away unshaken in our long-held belief that, barring health issues, she’ll run for a fifth full term.

According to PPIC, 60% of likely Democratic voters say DiFi should run again, versus 33% who says she shouldn’t. In other words, even as an octogenarian middle-of-the-roader, she’s solid among Democrats (and even six in 10 liberals).

Of course, 75% of Republicans say she shouldn’t run again, compared to 19% who say she should. But Republicans constitute an increasingly dwindling sector of the California electorate and most of them wouldn’t want any Democrat in the Senate. It’s kind of amazing actually, that nearly one in five likely GOP voter says DiFi should run.

If Feinstein has any problem in the numbers, it’s among independents, 58% of whom say she should not run and just 33% saying she should give it another go. That’s reflected also among moderates who are about evenly split on whether she should run again.

None of this screams re-election for Feinstein, but nothing in the survey suggests she could be beaten, either. As one Democrat close to Feinstein put it: “Those numbers are some of the best for any Senate candidate running anywhere in the country. Voters aren’t going to decide on her age — they’re going to decide on what happens in the campaign.”

Let’s remember that back in June 2016, Bernie (Not-a-Democrat) Sanders, darling of the left liberals, was supposed to have been mounting a challenge against known Democratic moderate Hillary Clinton in California and was said to be within two percentage points in the average of final polling. But Clinton waxed Sanders 53-46%. And, of course, Clinton went on to win California against Donald Trump 62-32%.

California voters – despite their “left coast” reputation –historically like to elect middle-of-the-road politicians statewide. You could look it up.

And, of course, there’s the fundamental adage of campaigns: you can’t beat somebody with nobody.

Who’s going to beat her — state Sen. Kevin de Leon,  a statewide unknown who’d bust his pick trying to raise the money it would take to mount a serious challenge? Entrepreneurial wunderkind and non-profit activist Joe Sandberg? Puh-leeze. Let him try self-funding and see what a real moneybags looks like in the person of Feinstein spouse Dick “Big Green” Blum. Tom Steyer? Won’t challenge a fellow member of the ruling class.

We don’t believe DiFi can be beaten from the left or that a Republican can win statewide. Which means, early PPIC polling or not, if she runs, Feinstein will hold on to her seat in the U.S. Senate.

Now we’re going back to sleep.

P.S. If Dianne decides NOT to run, we’d like Jerry Brown for the job.

(Jerry Roberts is a California journalist who writes, blogs and hosts a TV talk show about politics, policy and media. Phil Trounstine is the former political editor of the San Jose Mercury News, former communications director for California Gov. Gray Davis and was the founder and director of the Survey and Policy Research Institute at San Jose State University. This piece appeared in CalBuzz.