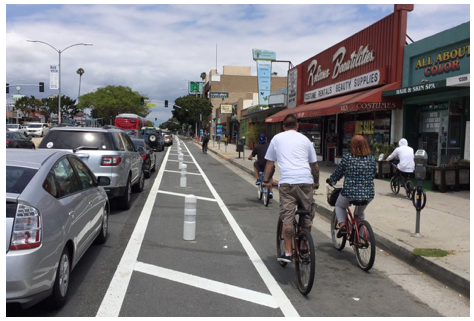 ALPERN AT LARGE--After having just gone through a nightmarish post Labor Day two weeks with the fight over the Venice Blvd reconfiguration (loss of one car lane, and creating a protected bicycle lane, in Downtown Mar Vista, among other changes) as part of Mayor Garcetti's Great Streets Program, the good news is that the City still values Transparency.  Ditto with Sincerity and Efficiency.

As the Mar Vista Community Council (MVCC) Transportation/Infrastructure co-chair, it's my job to evaluate any mobility/transportation issues that affect motorists, bicyclists, bus riders, pedestrians, etc.  Safety, efficiency, cost-effectiveness and a whole bunch of issues must be confronted and evaluated.

I'm happy to report that, by and large, the Bureau of Street Services is doing an amazing job of entering the 21st Century.  The "pothole blitz" recommendation list I sent this time around was, virtually within 24 hours, evaluated; within a week, either the potholes were fixed or evaluated as non-existent (in other words, no potholes were present on inspection).

At our last Board meeting on September 12th, we also had a quick but well-received request for a pilot program from the LADOT to provide cheap ($2, approximately) access in the Venice/Palms/Mar Vista region for access to/from your home to/from the Palms station of the Expo Line via mini-buses that would be able to respond to all calls within approximately 15 minutes.

A sort of Uber/Lyft-like service with a fleet of approximately six mini-bus vehicles to serve the First/Last Mile initiative to which many have raised is the big flaw in light rail transit.  The excitement and interest and questions abounded when Luz Echavarria raised this "Micro Transit" project to the MVCC audience.

Which really isn't a surprise, because the MVCC was at the center of Westside interest for the Expo Line and bicycle/transit/bus amenities for virtually its entire existence.

And Transparency for Street Services and LADOT projects is very, very much desired and appreciated by the MVCC (virtually from all the City neighborhoods, I imagine).

Unfortunately, the very large turnout at this September 12th meeting was for those either defending or protesting the aforementioned Venice Blvd Reconfiguration/Great Streets Project.  Those proclaiming its safety/mobility improvements have a counterpart that is at least as large who are proclaiming that the reconfiguration of Downtown Mar Vista is a safety/mobility disaster.

There were a slew of motions asking either reversal or reconsideration of the loss of the car lane through Downtown Mar Vista, and the issues of procedural validity of these motions were being weighed against the immediate safety concerns of the stakeholders.

However, despite the very contentious and angry discussions at the public and Board level, there is a very good bit of news.  The one motion to establish a Point Person to access and publicize data did pass, while the others were sent back to committee.

WHY did that motion pass?

2) It was a Stakeholder's motion.  Individual Boardmembers like yours truly can be told to go pound sand by the rest of the Board if they disagree with that Boardmember, but the Stakeholders always are supposed to have their needs and requests met first.

So it's a credit to MVCC Chair Sarah Auerswald (who might or might not wonder if her recent election as Chair was something that made her life better ... it was as rough a meeting as I've ever seen in over 15 years associated with the MVCC) that she kept things together, and emphasized Transparency in both Stakeholder motions and procedural issues.

We may be glued to our smart phones, but we're also glued to learning the Truth, and glued to the concept of Representation.

Which is, of course, at the heart of why Neighborhood Councils were established in the first place.