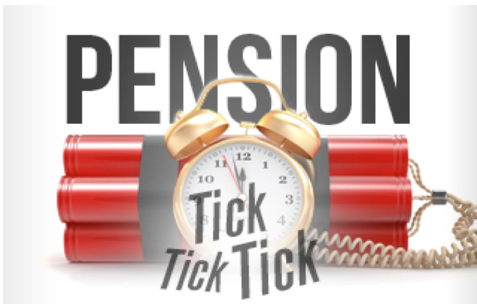 FOCUS ON THE FOOTNOTES-California pension worries most often focus on CalPERS and CalSTRS, the state’s two multi-employer behemoths. But the state has many other underfunded plans, and these city and county systems pose significant challenges for governments that contribute to them.

The City of Los Angeles faces the largest municipal pension funding gap, measured in absolute dollar terms. According to the city’s 2016 Comprehensive Annual Financial Report, Los Angeles’ Net Pension Liability totaled $8.2 billion. Curiously, this number does not appear on the city’s government-wide balance sheet (called a Statement of Net Position). Instead, the $8.2 billion is reported as part of LA’s long-term liabilities, resting in the footnotes of the city CAFR at pages 133 and 141.

But the city’s pension debt is actually even worse than this reported $8.2 billion. Drilling down further into the CAFR, we find that the pension liability data is based on actuarial valuations from 2015. Actuarial valuations of the City of Los Angeles’ three pension systems for 2016 were not available at the time the city’s CAFR was prepared, so accountants relied on prior year data. However, since the CAFR was released, all three Los Angeles pension systems have published their 2016 actuarial reports. Thus, we can get a preview of what the pension debt will look like when LA updates its CAFR.

All three plans reported increased unfunded liabilities because investment returns for the period July 1, 2015 to June 30, 2016 were lackluster – below 1% for all three funds. WPERP’s unfunded pension liability increased the most — from $1.1 billion in 2015 to $2.2 billion in 2016 — because plan administrators changed the discount rate assumption they were using from 7.50% to 7.25%, resulting in a larger reported amount of promised pension checks (even though the actual number didn’t change, only the accounting of them).

A pension system’s liability is the present value of expected future payments — or in other terms, the total value today of all promised pension checks for the future. The lower the rate at which these future payments are discounted, the higher the reported liability in current dollar terms. On June 1, 2017, the LAFPP board voted to reduce that system’s discount rate to 7.25%, following WPERPs lead. LACERS staff has also proposed moving to 7.25%, but the board has deferred action on their proposal.

Although these discount rate changes are a step in the right direction, they still leave the Los Angeles systems with more aggressive assumptions than those used by CalPERS and CalSTRS. Both statewide systems are transitioning to a 7% discount rate. If all three Los Angeles systems went from 7.25% to 7%, the city’s unfunded pension liabilities could be expected to rise by another $1.5 billion.

Whether the Net Pension Liability is $8 billion, $10 billion or some higher number is more than an abstract concept. Actuarial procedures followed across California dictate that public pension plans amortize their unfunded pension liabilities over time. In other words, state and local governments must make extra contributions to gradually pay off their pension debt, typically over a period of between 15 and 30 years. The higher the pension debt, the more taxpayers must contribute and the greater the pressure on other budget priorities.

The city’s CAFR shows that pension payments accounted for 8.3% of government-wide revenue for Los Angeles in 2016. But the budgetary pressure is concentrated on Los Angeles’ general fund, which covers day-to-day expenses for core city services like police, fire and public works. A recent presentation by LA’s Chief Administrative Officer showed pension costs accounting for about 19% of the city’s general fund budget in fiscal years 2016-2017 and 2017-2018. Between now and 2020, the CAO projects that general fund pension contributions will grow from $1.1 billion to $1.3 billion.

There are some bright spots to report. Pension systems across the country are reporting solid results for the fiscal year ending June 30, 2017 due to the strong stock market. If LA’s systems post returns similar to those reported by CalPERS and CalSTRS, we should see some reduction in pension liabilities – partially offsetting the effects of transitioning to more conservative return assumptions.

The city’s 2016 CAFR showed Los Angeles with net OPEB assets of over $800 million (although other OPEB actuarial estimates cited by Jack Humphreville are considerably less rosy). This contrasts sharply with Los Angeles County, which reported a net OPEB liability of $13.1 billion in 2016. Since Angelinos pay both city and county taxes, they thus face a large burden for retiree health care despite the city’s prudent policies.

As Los Angeles looks forward to hosting the 2028 Olympics, city leaders will be looking for opportunities to improve local infrastructure. But with such a high pension burden, LA could instead by facing a state of service insolvency  – in which it collects enough taxes to pay employees and meet bond obligations, but do little else. A better option for LA is to follow the example of San Diego, and take measures to reduce its crushing pension burden.

(Marc Joffe is a senior policy analyst at Reason Foundation. Joffe is a regular contributor to The Fiscal Times and his op-eds have also appeared in The Guardian, Bloomberg View and RealClearMarkets.) Prepped for CityWatch by Linda Abrams.