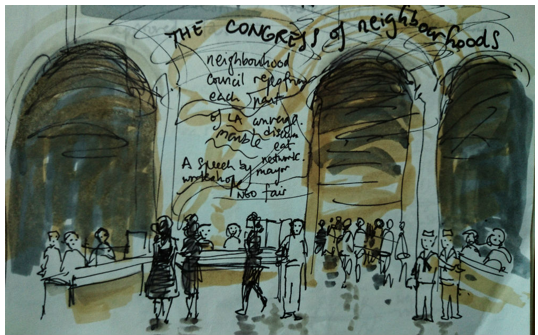 JUST ASKIN’-Once a year, volunteers from LA’s neighborhood council system get together and orchestrate an NC "Congress."

When the first Congress was planned, based on the City Charter, the goal was to review citywide issues, debate them, and take a stand (vote) on how to address them with the elected officials.

Over the years, the Congress has grown to over 800 attendees, and more than 40 workshops.

For the past few years, the Congress has turned into a training day for mostly NC board members, a job somewhat abandoned by the Department of Neighborhood Empowerment. No controversial issues or sessions that could possibly have views deemed uncomfortable by the overseeing department. It’s all "staffed" to ensure the company line.

No after-sessions. No controversial topics. No votes on citywide items.

At a time when there is a growing distrust of city government, and certainly a lack of confidence in DONE’s ability to properly support neighborhood councils, the roster of workshops again does not tackle the big issues:

Outreach by NCs to their stakeholders

Increased litigation against the city

Cost over-run guarantee for the Olympics

WITH ALL THE ISSUES FACING OUR CITY, AND A GUARANTEE BY THE CURRENT CITY COUNCIL OF ALL EXPENSES FOR THE OLYMPICS, why is the Congress focusing on doing DONE's training jobs instead of doing referendums on many of the above serious items facing our city?

It is certainly a lost opportunity at the very least.

The charter says NCs are to inform the elected officials on deliverables. This, with over 800 attending, would be the natural event to fulfill the charter mandate.

(Jay Handal is Co-Chair of the NC Budget Advocates, treasurer of the West Los Angeles NC and Los Angeles Police Commission Hearing Examiner. Mr. Handal’s views are his own.) Edited for CityWatch by Linda Abrams.