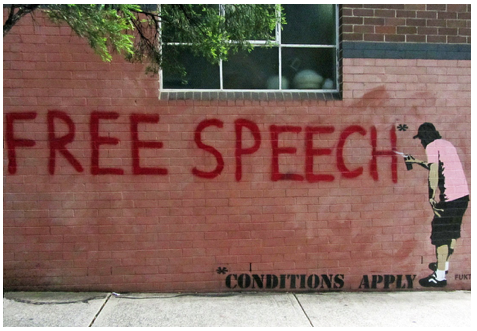 EASTSIDER-Coming out of the free speech/anti-war movement of Berkeley in the 60’s, I hoped that we, as a society, had already tested the boundaries of free speech and found common ground. The deal was that you could say virtually anything you want with your mouth. Notwithstanding the fact that government and most people really don’t like free speech at all.

Lenny Bruce was the poster child in the verbal arena, until the Berkeley Barb came along and outed the real names of spooks (CIA operatives) in its columns. And on the flip side, the government decided it was OK to film public events, scan the crowds for “subversives,” and develop secret files on students, protesters, and groups like the SDS and Black Panthers.

And even in the realm of physical action, it seemed reasonably clear that you could do heinous things to objects, but not to people. Students burned draft cards, desecrated the American flag, and made “art” that a lot of people despised and frothed over. And the government was not innocent, contacting employers or potential employers to tell them to fire or “put the word out” on folks they decided were “un-American and should be ratted out.” But that was all a far cry from physically injuring other people, which was mostly where the lines were drawn.

On campuses like Berkeley and UCLA, it was OK and even encouraged, to have communists like the Longshoremen’s Harry Bridges (actually, he thought commies were a bunch of wimps) or fascists like the John Birch Society fronts appear on campus to give talks. Heck, you could even go see John Dos Passos, who was both! He once quipped that if you weren’t a commie when you are young and a fascist when you are old, you have missed the understanding of America.

Anyhow, after that era, we started to seriously regulate PC (Politically Correct) behavior more and more, at least in California. Politicians passed all kinds of policies on PC speech, with Commissions to decide who violated their rules and what discipline to take, and we seemed to slide into “mother may I” behavior determined by self-appointed arbiters of speech. Oh well...

But I knew our culture was in serious trouble when Ann Coulter was turned away from giving a talk at UC Berkeley. Ann Coulter?  She’s just a cultural shock jock making a buck being provocative. Good grief -- she isn’t even the real deal.

Speaking of the real deal, I’ll never forget when the President of Singapore, Lee Kuan Yew, was at Berkeley meeting with a group of free speech/antiwar protesters. I’m paraphrasing, but he asked how many protesters had been killed to date. When the group admitted none, he called them a bunch of wimpy white middle-class liberals, and left.

For those who don’t know, Lee Kuan Yew built Singapore as the model of a Southeast Asian economic engine by basically being a dictator. He outfoxed the Communists, he outfoxed the Europeans, and made no pretense of free speech. He was all about results. He had a private army of Gurkhas, and when he declared a “riot,” they went out in public and anyone dumb enough to still be on the street was at risk of being killed. No wonder he thought the Berkeley movement was pitiful.  You can read a bit more about him here, but the price to pay for this style of government is no civil rights or free speech.

How We Got Here

Since the 60s, it always seemed to me that we had simply slapped a band-aid on all the racism and other nastiness gurgling around in our society, and the result just drove its proponents underground. Hate and racism didn’t go away. No one changed a bunch of minds through our politically correct policies. Of course, most of my friends who are African-American or Latino tend to look at me and say, “duh.”

And where was the ACLU, which really came into their own during the Free Speech movement?  Running around the County of Los Angeles saying that the cross had to come off the LA County Seal!

And since I’m on a roll, what about our news media? They were scheming and consolidating and trying to grow market share even as print media was dying the death of a thousand cuts. Their answer? Decreasing outlets and the care and feeding of “niche markets” by dividing the electorate even more than it already was.

To create and amplify these niche markets, virtually all the electronic media shifted to a format of three talking heads: Anchor (smiley toothsome face), the Left (paid consultant), and the Right (paid consultant). It was a lot cheaper than real reporting with all the costs that entails, and by simply branding everyone left or right, they could nudge and further split the existing electorate into a sharper, media-framed division. Simply by who they hired to “represent” the left or right and what they paid them to say. More division, better market share. I don’t care if it was MSNBC, Fox News, or even CNN after Ted Turner bailed out. Same deal.

The blowup was our financial meltdown of 2007-08. Our government, both Republicans and Democrats, made a conscious political decision to bail out the probably crooked financial services industry to the tune of trillions of dollars, and sell out the homeowners and taxpayers who had been screwed by these crooks. In that respect, George W. Bush and Barack Obama were no different. It was the instant destruction of most of our middle class, and to this day it is harbinger of an emerging two class electorate.

(Note: If you don’t believe me about Obama, check out this article: “WikiLeaks Bombshell: Emails Show Citigroup Had Major Role in Shaping and Staffing Obama’s First Term.”)

Our government’s solution to the resultant withering of the middle class was that we now cook the books about our real unemployment rate. We now have a new, permanently disappeared class of people who have given up on getting a job because they are disenfranchised from our economy and therefore no longer counted in the statistics. Non-people by the stroke of a pen. Lose a job, get a chronic illness, get old? Whap! Madness. By 2016, almost 20% of prime working age adults were no longer in the work force.

So exactly what the hell does our government expect to happen as broad swaths of our society, both urban and rural, have no realistic economic hope? The Democrats have sold them out, and so have the Republicans. Social unrest comes when people are sinkin’ fast and have no hope. San Joaquin Valley, Riverside, large chunks of Los Angeles, same deal.

So, Oh Gee, the Lid Comes Off

Well, along came a guy named Donald Trump, who got himself elected President, and blew the lid off the whole shebang.

As an iconic flashpoint, it all came out in Charlottesville -- hatred, anger, fear, violence. White racists, Neo-Nazi’s, anti-semites, and even the KKK, for god’s sake. The Donald had managed to pop the pimple of all that underground, suppressed anger, fear, and hate.

The fact our President seemed to be comfortable with this was just icing on the cake.

There’s a message here, and it’s not just about hate. If groups of people feel squashed, economically discarded, and with no hope for the future, a percentage of them are going to act out, and it can lead to seriously bad results.

Of course, in the great scheme of things, this too shall pass, as will Donald Trump.

But here’s what’s not supposed to pass -- the 1st Amendment promising that Congress shall make no law...abridging the freedom of speech...or the right of the people peaceably to assemble.

Here’s what I find scary about the current round of civil disobedience. Lessons from the 60s show us that, when faced with significant civil disobedience, our institutions leap to over-regulate and suppress. And the recent news frenzy after Charlottesville seems to favor some political assumption that the abrogation of our right to free speech and other constitutional guarantees can be modified by political polling instead of following the Constitution.

The right of the people to peaceably assemble has already been abridged -- now if you want to march you have to have a “mother may I” permit, and then can only do so in designated areas far from the actual events that are being protested. Well, that may make law enforcement’s job easier, and shield politicians from public scrutiny as they meet with their oligarch owners, but it sure as heck is not what the Constitution says.

And, notwithstanding all the PC platitudes dripping from the mouths of the millionaire talking heads in the media, let’s remember that free speech means just what it says. Acts of violence are against the law; racist, inflammatory, or even incendiary potty mouth speech is protected (supposedly) by the Constitution.

I’ll leave it to those who purport to be our voices of morality to pass judgment on the actions of all these hatemongering groups. I’m more concerned with the impact on our basic freedoms than I am about how governmental institutions handle or mishandle civil disobedience and the ugly crimes that can stem from it.

And where the heck is our ACLU when we really need them? Waffling.