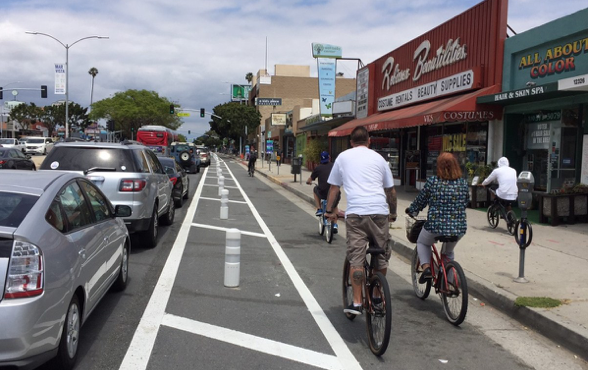 RANTZ AND RAVEZ-I recently discussed the current living conditions in the City of Los Angeles with a 30-ish, married resident of the San Fernando Valley who works for the City of LA. He is quite upset with the current state-of-affairs here: traffic congestion, increasing crime, lack of affordable housing, the economy, the constantly expanding homeless population and a host of related topics. In addition to the direction in which the city is headed, we discussed the Mayor’s plan and vision for LA.

This person told me he believed the city is running on Zero Vision rather than Vision Zero.

The traffic situation in and around Los Angeles is getting worse by the day. There is a movement on the westside of town to recall the local councilman for supporting the reduction of traffic lanes to accommodate bicycles and help reduce traffic incidents. The program backfired and the councilmember and the City are now removing restrictions and returning those traffic lanes to their intended purpose: moving vehicles so that people can get to work, school and other activities we still need to do in the our homeless-filled, congested and crumbling city.

You may ask how much was spent on this new traffic pattern -- and how much is being spent to return it to its previous condition. While I don’t have the specific cost, I can estimate that it is in the hundreds of thousands of dollars. Maybe not a big deal for a city that seems to always find money when it wants to.

I will always remember wise words from a former LA City Councilman I met with when I was a Director with the Los Angeles Police Protective League and we were at an impasse on contract talks.

“Dennis,” he said, “the city can always find the money…you just have to know where to look for it.”

I have never forgotten those words and it is so true, even in today’s environment. Los Angeles has found millions of city dollars to represent those who face immigration issues. Also, the City has proposed establishing a savings account for all Los Angeles Unified elementary school students. The logic in this crazy idea is that young students who know nothing about money will learn how to save it. Just remember when you were a young student and had a few dollars in the “Good Old Days.” You would spend it the minute you got it, right? It never burned a hole in your pocket.

As a curious individual with nearly a 50-year history with the LAPD, I want to know what kind of sweetheart deal is in this for the bank managing that money? Something to consider. It’s kind of like “truth in lending,” right? So, how about truth in managing millions of dollars for young students?

Crime Stats continue to reflect trends in increasing crime throughout Los Angeles. The July 22, 2017, Official LAPD Compstat profile reflects the following: (This is a comparison from 2015 to 2017 statistics.)

The statistics clearly reflect the fact that the LAPD is under-staffed and stretched razor thin. In addition to the lack of personnel, there is lack of support from the Los Angeles Police Commission, contributing to the significant increase in crime and reduction in the number of arrests.

The Police Commission should be more concerned about protecting the public rather than constantly trying to reform the LAPD and restrict officers in their sworn duty to “Protect and Serve All the People of Los Angeles.”

Who is pouring money into Sacramento Lobbying efforts?

I recently read a report on which organizations are spending tax dollars on lobbying efforts in Sacramento with our elected state officials. One would think that the state’s local elected officials -- like Mayors and City Councilmembers and Boards of Supervisors -- would be working with our state officials to improve the quality of life throughout our California communities.

For example, since LA County consists of 88 cities, and each city is governed by local elected officials, one might think that state officials would work in cooperation with those officials to improve various situations occurring in the state. Logically, one would think there would be cooperation, that everyone would be concerned with achieving good and honest government. But the facts are much different. New lobbying reports show that local and regional governments and elected officials spent a combined total of $24.3 million in taxpayer money on Sacramento lobbying efforts in 2017.

This makes local government the largest contributor of influence peddling in Sacramento.

In comparison, local unions spent $6.8 million, while oil and gas companies spent around $16.7 million. Healthcare spent $23 million in the first half of 2017. Like Walter Cronkite used to say when he signed off from his CBS Evening News broadcast, “and that’s the way it is.”

Well, that’s truly the way it is in Sacramento, California.

Here’s a Rave for you…

The Los Angeles County Fair is coming to town from September 1 to 24. There are some opportunities you may want to take advantage of:

For additional information and any restrictions on the promotions, go to LACOUNTYFAIR.COM.

I have always loved the LA County Fair and will be visiting it again this year.

(Dennis P. Zine is a retired LAPD Sgt. and former LA City Councilmember. His Rantz and RaveZ articles illustrate the frustration many taxpayers feel living in the City of Los Angeles. If you have ideas for an article, you can contact Dennis at [email protected].) Edited for CityWatch by Linda Abrams.