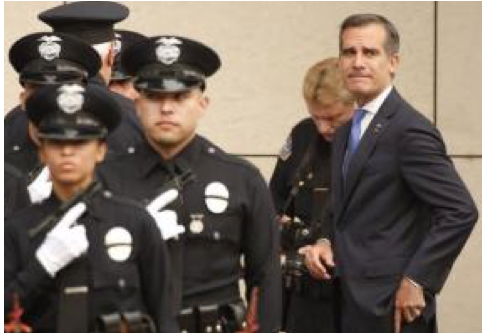 PERSPECTIVE-In several of my articles, I’ve characterized the City of Los Angeles’ finances as being in a state of virtual bankruptcy. Pension costs are the key drivers of the city’s unsustainable model. Growing pension costs are plugged by reducing service levels or holding them flat in the face of higher demand.

It appears as if I am not the only one to coin a term for this form of neglect. (See Steven Greehut’s piece for the California Policy Center.) I like mine a little better. It packs more punch. No problem, though. “Service Insolvency” gets the point across.

One need not look much further than police staffing to understand what it all means. The city’s population grew from 3.7M in 2010 to 4.0M in 2017.and the trend will continue. The 300,000 increase in population is the equivalent of a small city.

Violent crime grew 38% over the two-year period ending December 2016, after a period of stability going back to 2010.

The LAPD ranks have fallen below the 10,000 achieved in 2013. Its per capita numbers rank way below New York’s and Chicago’s.

Despite the widening gap between higher crime and LAPD’s resources, there has been no serious plan offered to narrow it.

City Controller Ron Galperin’s recommendation to reassign officers from desk jobs to the streets was a good one, and has the potential to free up 450 officers. But the city requires a force of 12,500 to perform effectively, that’s according to our current police chief, Charlie Beck, and his predecessor, William Bratton. That level requires a bit more than what Galperin’s proposal would cover.

One can argue about the exact size of the force required to maintain an acceptable level of service, but trends clearly support the need for a sizable increase. Let’s not forget the additional civilian jobs needed to support a larger force and those hired to backfill the desk jobs.

The problem is money; that has always been the case.

To put it in perspective, if you assume the LAPD has a budget of $1B, a 25% staffing increase would add $250M per year. That’s a very raw number and does not factor in economies of scale. Still, an overall increase of well north of $100M would not be a surprise.

A key factor which limits how much can be budgeted is the city’s share of pension costs. They consume 20% of the general fund budget, up from 5% in 2002. In 2008, the beginning of the great recession, it was 15%. So, despite a robust recovery, the slice has increased in size.

And let’s not get into the unfunded liability, which has also grown significantly since 2003. It is a leading indicator of more financial stress in the years to come. Citywatch’s Jack Humphreville could teach a course on the subject.

It is difficult to increase the level of service while lugging that much baggage.

Former Mayor Antonio Villaraigosa promoted a trash fee hike to pay for an additional 1,000 officers (although it fell far short of that number).  But the public is not going to tolerate a layer of expensive new fees, especially if they disproportionately fall on property owners.

Until City Hall pushes back against the public unions and demands higher employee contribution levels to go towards their incomparable retirement benefits, look for the mayor and City Council to propose new fees. Probably not all at once – that would never fly – but over time. A parcel tax here, a sanitation fee there.

Outsourcing many civilian jobs to the private sector would also help to decrease the benefit load.

Restructuring the labor force and increasing employee contributions are not going to happen given the composition of our current city council and the grip the unions have on its members.

And for many, that is probably the case today.

If only they voted.