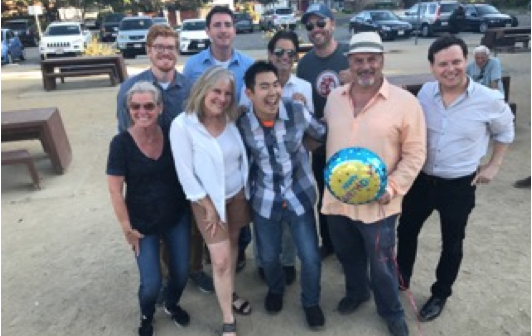 THE PREVEN REPORT--To the casual observer there was nothing remarkable about the Studio City Neighborhood Council’s (SCNC) vote last Monday to oppose Harvard-Westlake School’s “Parking, and Athletic Improvement Plan,” which involves building in the hillside abutting the school’s campus a 750-space parking structure topped with a lighted athletic field that is connected to the school by a covered pedestrian bridge arching over Coldwater Canyon Boulevard.

The video of the vote shows eight casually dressed SCNC Board Members sitting around a picnic table in Studio City’s Beeman Park. The group convenes at approximately 6:15pm, hears a few public comments from members of the community, reads the Resolution out loud, amends it by adding the phrase "strongly opposes" to the final paragraph, and then votes unanimously to adopt it, as amended. At 6:30pm, just fifteen minutes after its commencement, the meeting is adjourned.

The video is unremarkable because it doesn’t show the obstacles those eight elected Board Members had to surmount in order to hold the vote.

It doesn’t show that just fifty minutes prior to the scheduled meeting time, the Department of Neighborhood Empowerment tried to cancel the meeting, citing an agenda posting irregularity which has since been discredited.

The video doesn’t show every SCNC Board member receiving a few weeks earlier the following email from Darren Martinez, the City Attorney who oversees the Neighborhood Council system and who, as we reported in these pages a few weeks ago, asked the SCNC Board members to “state their specific involvement and positions within the organizations that support or oppose the project.... [sic] are the board members attending meetings of these organizations, what types of activities have the board members been involved …[sic] also what specific public or written statements have been made and when did these activities occur. These matters are decided on a case by case basis, so I will need to discuss the issue with any person who might be impacted.”

The vote taken by the Studio City Neighborhood Council last Monday was as much about the Neighborhood council system as it was about Harvard-Westlake’s parking plan. It was a vote in favor of trying to recapture the hopeful spirit with which the system was founded fifteen years ago. We hope it succeeds.