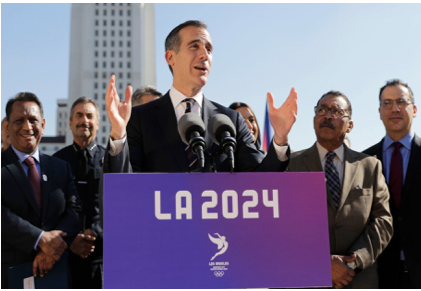 PLATKIN ON PLANNING-The announcement that Los Angeles will host the 2028 Olympics has lead to a highly contagious disease: Olympic Fever. It is particularly virulent among the same well-off crowd that imagines a few iconic buildings designed by celebrity architects, such as the Disney Concert Hall, the Getty Center, or yet another remodel of LACMA, will finally turn Los Angeles into a truly global city.

In this case, they want another iconic event, the 2028 Olympics, on the heels of 1932 and 1984. But, just like iconic buildings, which are consistently at odds with their physical environment, iconic events suffer a similar fate. Massive resources are poured into them, and then there is one month of frenzy, followed by a decades-long return to business-as-usual. Of course, a few athletes and many private media, security, and tourist companies will make a tsunami of money, but nearly everyone else in Los Angeles will be right back to where they were. They will have little to show from a decade of time, energy, resources, and money pumped into the Olympic games.

How much money are we talking about?

This is why the overall estimated cost of the 2028 Olympics is forecast to be $5.3 billion. The City of Los Angeles is already committing $488 million, with more to come from both the City and the State of California, which has so far pledged $250 million.

Thus, the city that cannot afford to fix its sidewalks, build protected bicycle lanes, plant and maintain trees on its parkways, enforce its building and zoning codes, take down its gaudy bilboards, properly update it General Plan, house its residents, expand its pint-sized park system, or prepare for the “Big One” will pony up massive resources for a month of global showmanship in 2028.

Despite this grim assessment, Olympic Fever is raging across the city and in Washington, DC, despite one organization, NOlympics LA, that is opposed to the spectacle. So far, Mayor Eric Garcetti is leading the Olympic Fever pack: “This agreement with the IOC will allow us to seed a legacy of hope and opportunity that will lift up every community in Los Angeles -- not in 11 years’ time, but starting now.” And, according to a mid-July Loyal-Marymount public opinion poll, 83 percent of local respondents support holding the 2028 Olympics in Los Angeles. Of course, if the survey instrument had mentioned the costs and noted that the enthusiastic Los Angeles City Council has not yet reviewed the 2028 Olympic budget, the poll’s results would have undoubtedly been less supportive.

In Washington, or possibly Florida or New Jersey, President Trump also championed the 2028 decision, saying, “I am confident the Summer Games of Los Angeles will exemplify both the Olympic ideal and the American spirit, and we look forward to hosting them.”

So, what is the antidote to Olympic Fever? Will it take billions in emergency grants from the Center for Disease Control in Atlanta? Should our local medical schools redirect their researchers to conquer this highly contagious ailment?

No. The treatment of this disease is as simple as could be. You open your front door and then walk down nearly any street in Los Angeles. What you see before your not-so-lying eyes are the consequences of billions in deferred investment. This is why LA’s public services and infrastructure are in such a mess. While the 2028 Olympics will certainly spark some short-term cosmetic changes, like street sweeping and graffiti scrubs, programs to tackle LA’s many unfolding crises will stay on the back burner. The decade of planning and preparing for the 2028 Olympics will suck up the oxygen at City Hall, leaving little time, attention, or resources for what awaits you outside your home:

Sidewalks: This first thing you will see when you walk toward your front sidewalk is that it is buckled and cracked, lifted by tree roots, with indelible stains from gum and food. While City Hall has recently adopted a program to fix the city’s sidewalks, it will take 30 years, along with a commitment by future City Councils to fork over the money in each annual municipal budget.

ADA curb cuts:  Next, if you walk to the corner, you will be lucky to find an ADA curb cut, even though the City of Los Angeles is under a court order to make these legally required health and safety repairs.

Street trees:  After that, if you look to the left of right, expect to see parkways either totally devoid of street trees or a patchwork of bare cement interspersed with a hodge-podge of different tree species.  These trees do have one thing in common, though; they are losing their fight against vehicles, heat waves, droughts, insects, and contracted tree butchers. 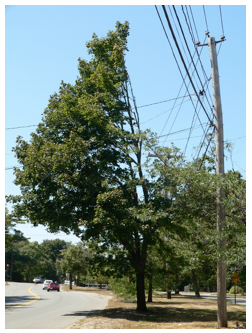 Overhead wires: While you are at it, look up and you will also see a maze of overhead wires from the DWP and telecommunications companies.  Good luck to you if they don’t arc and create mini-lighting bolts during the Big One, or snap during climate change-infused super-storms.

Streets: You can also take a peak at the street, where you are likely to see car and pedestrian accidents, potholes, fast food packaging, and intersections that lack such standard safety features as punch-outs and zebra-striped cross walks.

Homelessness:  As a by-product of cutbacks, growing economic inequality, real estate speculation, and gentrification, homeless individuals and homeless encampments have spread to every Los Angeles neighborhood. Obvious fixes, such as publicly funded and operated affordable housing, are not even on the drawing board.

Unprotected bicycle lanes:  As for bicycle lanes, unlike New York City, Chicago, and Washington, DC, they will not be protected, instead just a few faded lines painted on busy streets.

Alleys:  If you have alleys in your neighborhood, get ready for a glimpse of Los Angeles after the apocalypse. Even if you don’t have to side step dumped couches and old TV’s, the alley(s) will still be filled with broken asphalt, ruts, giant potholes, and pools of stagnant water when it rains.

Billboards and Signs:  If you then walk to a nearby commercial street, get ready for an onslaught of bootlegged signs and semi-legal billboards. If it is too much for you, though, you can always cross over to Culver City, Beverly Hills, and other nearby cities, where billboards are illegal and municipal sign codes are enforced.

Parks: On your walk, don’t be surprised if your path doesn’t pass by a park because only four percent of LA’s land area is devoted to parks, while other large American cities average 16 percent.

This stroll is the daily reality of most Angelinos. Furthermore, everything you observe when you take your walk is here to stay past 2028, in part because our officials are so fond of iconic buildings and iconic events. While you are at it, you might also brace yourself for the consequences of another decade of urban neglect since it will usher in far more than potholes and crumbling sidewalks. After all, LA’s enormous 1992 civil disturbance took place eight years after the 1984 Olympics.

That tide never managed to lift all ships.