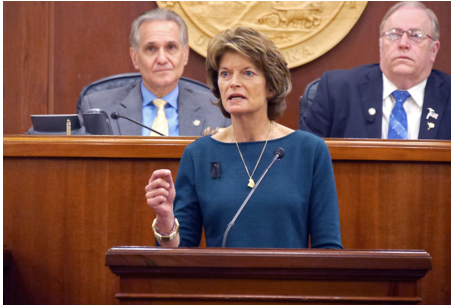 GELFAND’S WORLD--This is an exercise in thinking about a political left-center that is coherent enough to act effectively. Today's issue is the loss of health insurance for tens of millions of Americans at the hands of Mitch McConnell. Tomorrow's could be the phase out of Medicare under Speaker Ryan. How do we bring organized power to bear against their actions?

The left has rediscovered an old weapon against right wing extremism -- consumer boycotts. The clearest demonstration came when Rush Limbaugh suddenly found himself losing major market radio stations. In a previous era (now 52 years in our past), the Delano grape strike led to a nationwide grape boycott that went on for half a decade.

Boycotting an entire state is a challenging undertaking. There have been partial boycotts against Arizona and North Carolina over social policy. But it would be easier to boycott the tourist industry of Alaska, a state that depends critically on tourism for a major part of its economy. Tourism provides a specific target -- just don't book that cruise or plan that trip to Denali.

Why Alaska? One senator -- Lisa Murkowski of Alaska (photo above, center) -- may be the single most critical vote that would move Mitch McConnell's repeal of Obamacare to the floor of the Senate. Mitch is applying pressure to get Murkowski's vote. The rest of us should apply our own kind of pressure in the opposite direction.

What with John McCain recovering from surgery, the Republicans have postponed the floor fight over Obamacare for at least another week. That will give a little more time to turn the screws on senators who are waffling over throwing people out of the ranks of the insured. But how can Californians and New Yorkers apply pressure to a senator from a far off state? The answer is to pick the right target.

Murkowski has been on the fence. She has expressed concern about the reduction in Medicaid funding that would come with the repeal bill. Senate majority leader Mitch McConnell has reached into the grab bag and come up with one of the oldest congressional tricks. It's the pork barrel.

Back in the old days, the term pork barrel referred to the process of congressional leadership buying the votes of specific congressmen by slipping funding for a new post office or highway interchange into some otherwise unrelated bill. The congressman got an expensive federal construction project to brag about (and presumably to get reelected over). The congressional leadership got a vote they needed. The press viewed pork barrel as a chronic scandal, but in that former era, a little well-directed pork served to grease the wheels of government. Pork barrel is officially objected to by Republicans, but apparently this week is different.

Mitch McConnell wants to move the bill to repeal Obamacare along so that he can get to the more pressing task of reducing taxes on the ultra-wealthy. He needs Lisa Murkowski's vote. So the suddenly revamped repeal bill has about a billion dollars of pork in it for Alaska. Vox has explained the particulars in detail. Alaskans would get a special subsidy to their health insurance costs based on a formula that only works for Alaska. Washington D.C. journalists have invented sarcastic terms such as the Kodiak Kickback for the billion dollar bribe.

Obviously Murkowski and her constituents have some thinking to do. The repeal would have an overall negative effect on Alaskans in terms of losing Medicaid money, not to mention the loss of Obamacare itself. On the other hand, were the bill to pass (somehow) without the included pork, Alaskans would suffer a double whammy in that they would lose their insurance without getting the billion dollar subsidy.

The astute reader will have noticed that the fate of Obamacare -- and the overall health of our civilization -- has been left to one senator representing a state whose population is less than three quarters of a million people. To put it in perspective, Alaska has a population that totals about a fifth of the population of Los Angeles.

Yet that state and its senior senator now have the power to preserve Obamacare for the near future or to scuttle it. It is the power to do damage to the health (and for some, the survival) of millions of people down here in the lower 48.

What can the rest of us do about Murkowski? We can start by recognizing that boycotts don't often work but under the right circumstances, they can have the intended effect.

Alaska's economy is heavily dependent on tourism. Moreover, it is a particular kind of tourism.  A large fraction of the tourist dollars come from people who come to experience the scenic wonders. These tourists are split between cruise ship passengers and the hikers and backpackers. The other kind of tourists are those who go to hunt and fish. There aren't a lot of tourists who make the trek in order to attend the Fairbanks Grand Opera.

The scenic wonder sort of tourists include a substantial fraction who fit into the conservationist mode. These folks are more likely to support Obamacare and oppose Trump, McConnell, and the repeal bill.

This is the crux. Those of us who are fighting to preserve medical insurance reform and have a few dollars to spend on a trip can choose to put our money somewhere other than Alaska. That's not to say that it's a great choice to make. I've been to Denali and the Kenai peninsula, and it was worth going. But if the good of the nation demands that I skip the return trip and go to Chicago instead, why then I will visit the Art Institute and Portillo's and be well satisfied. Gosh, for a little more money I could go to Iceland or Munich and not have to feel angry about supporting Mitch McConnell's nasty little games.

The thing about a consumer boycott based on a strong feeling of ethics and morality is that such boycotts are hard to undo. While the Delano grape strike was going on, people got into the habit of ignoring grapes at the market. Even when the strike was settled, the habit persisted for a long while. It's not that every single person skipped out on grapes, but that a significant number of families got out of the grape habit.

Alaska has the choice of becoming saddled with this identity:

Alaska killed medical insurance for the rest of us, so the idea of going to Alaska leaves a bad taste in my mouth.

In a way, it's a bit of turnabout. The right wing has gotten a lot of mileage out of bullying. That's what the Tea Party did so successfully, and it was the official temperament of Trump rallies during the campaign season. It's also pretty much the temperament behind repealing Obamacare. It's a little late to undo the feelings set loose by the Trump rallies, but the rest of us can use the tools we do have to prevent further damage. And if that involves creating a nationwide boycott of Alaskan tourism, then so be it. Such a boycott would inevitably gain traction on the internet and would thereby extend itself to potential tourists from other continents.

Would such a boycott bring Alaska and Palin politics to a halt? Probably not entirely, but it would create concern up in Anchorage and Seward, where the local work force depends on summer tourism. (Ever hear what they call the first snowfall in southern Alaska? Termination dust.) For a population as small as southern Alaska's, the tourism industry is critical. We're talking about billions of dollars a year. Suppose the boycott could reduce this figure by a billion. There goes the Kodiak Kickback right there.

And once started, such boycotts go on and on. People (particularly Europeans) will just remember that they are boycotting Alaska for some reason or other, and that's that.

I haven't heard from anyone else about an Alaska boycott as yet. The breakdown of the senate voting blocs is just now starting to filter through. But when enough of us in the lower 48 figure out that the health of our children and grandchildren is suddenly dependent on that Murkowski vote, we won't have a lot of compunction about calling on people to move their tourist dollars elsewhere.

Or to put it more simply, how do you think environmentalists think?

The groups resisting Mitch McConnell and Trumpism have a week or so to come to an agreement over a boycott of Alaskan tourism. Considering the 6000 plus chapters of Indivisible, this should not be that difficult to do. The upside of talking about the boycott is that it will stimulate a little thought up north about the consequences of screwing the rest of us.