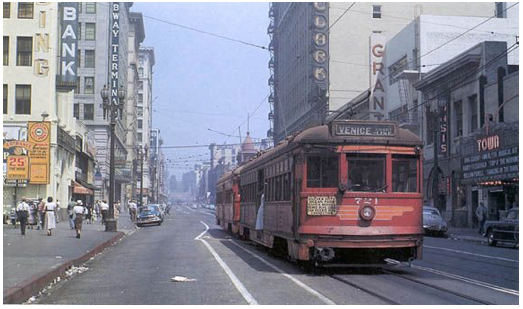 MY TURN-Full disclosure: I am not an expert in City Planning. Having attended a few Planning Commission meetings and Neighborhood Council rallies "against" new developments, I have seen people display the most discourteous behavior. Sometimes I have mentally checked out when faced with myriad of statistics presented by engineers and architects.

The sum total of these few experiences boils down to this: "No one likes change."

Having lived in Los Angeles for more than five decades, I’ve seen all kinds of changes. I used to take the red street car downtown with my mother (she wore a hat and gloves), then I worked downtown in the 60s and 70s and watched that part of the city fall into sad disrepair. People complained bitterly about the California Mart being built. Ultimately, it managed to enhance LA's reputation as an important fashion market. Now it is getting a facelift to keep up with its exciting neighbors.

Whereas we had "Sam's Roll and Rye" for lunch, the Mart was able to bring in Dales, an upscale lunch and watering hole to serve the increasing fashion business activity. Of course the venerable Mike Lymans catered to the (mostly male) lawyers and stock market executives. Today, you probably could eat at a different restaurant in DTLA for more than six months without a single repeat. I never saw anyone walking a dog in the more the twenty years I worked downtown. Now they have "clean up after your dog" signs all over.

These have been positive changes overall but, admittedly, not for everyone. Here’s the rub: there is no way to please everyone. When it comes to where you live, everyone is proprietary.

Remember the hue and cry over the Woodland Hills Village? I was there the other night. It was packed. There is every kind of restaurant and lots of small stores anchored by Costco. Before it was built, there were meetings with people voicing discontent almost every week. Funny, I don't hear them complaining now, even with the increased traffic. Obviously, Costco has filled a need and even with ample parking, it can be difficult to find a space. The Woodland Hills/West Hills Chamber of Commerce is welcoming new members all the time.

Now the Woodland Hills Promenade is getting ready for a huge facelift. Yes, there will be people who don't want more development in their neighborhoods but I bet they won’t mind the value it adds to home prices in the area. And how about the ability to walk to a restaurant for dinner?

The Mar Vista/Venice "great Streets"/bicycle lanes project has roused the neighborhood. Of course, that area has undergone big changes and along with the pluses come the problems. This part of LA probably has more vegetarians and "green" gardens than most places in Los Angeles. Many meetings are being held for residents to voice all points of view. Eventually people will arrive at a compromise position. That is what happens with "progress."

Compromise was reached for the developments in Hollywood after what seemed to be an interminable amount of time that included shouting and propaganda on both sides. The new Mall/Hotel project recently announced for South Los Angeles seems to be meeting with mostly enthusiasm along with some skepticism.

The LA Times is asking for people who live in Lincoln Heights (East LA) to contact them about the ideas for improving their neighborhoods. How do you balance the need for more business and services without forcing people out of their homes? That is the basic, humungous problem that so called "gentrification" causes. We are not talking about eminent domain to make way for huge construction projects, but rather, how people who rent apartments and homes in these "upgraded" areas will afford to continue living there?

I read about another gigantic development in Sherman Oaks where Sunkist has its headquarters. A huge multi-use development at the Southwest corner of Riverside Drive and Hazeltine, adjacent to Westfield's Fashion Square Mall, is being planned by IMT (developer of the Sunkist Project). While the iconic Sunkist building itself will remain intact, IMT's current plan includes the addition of 270 apartments plus a grocery store and other retail and commercial businesses, including a hotel built on the site.

There seems to be disagreement as to how the traffic flow will affect everyone. I always wondered why nothing was done with that huge space. The Northwest corner has one of the smallest Trader Joe’s in its strip mall. Remember when Fashion Square, anchored by Bullocks, first opened? It was exciting to have stores within such easy reach.

In my opinion the biggest problem for neighbors facing all of these future projects is the actual construction itself. Lanes being shut, noise, dust all have an effect on our day-to-day living. Hopefully some genius will come up with ways to diminish these obstacles.

As much as we would like to have these new projects in someone else's back yard, it is not going to happen. LA stopped being a series of bedroom communities a long time ago. Even though we can brag about having the sixth largest economy in the world and almost the best weather anywhere we can't stay still. We are a great city and in order to stay that way change is a natural part of the order.

Of course, when it comes to my back yard...there is a huge mostly empty DWP lot next door. I am more than a little curious to see what they intend to do with it. And you just might see me in the front row when they start having meetings.