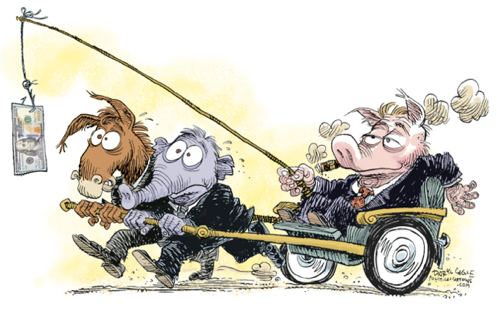 PARTY DOWN--Whether the issue is the privatization of public education for corporate profit and the further dumbing down of America or the continued suppression of the will of the majority by gerrymandering and/or removing legally registered voters from the voting rolls based on clearly false charges of multiple registration or any one of many other corporate inspired programs to thwart the will of a democratic majority, the response from the Left in this country has been anything but logical, effective or reasonable.

The Left never seems to take into consideration what Duke University historian Nancy MacLean so clearly enunciates in her work, that for the oligarchy that is now firmly entrenched in this country, democracy and its institutions are anathema to their brand of laissez faire capitalism on steroids.

One possible and rather scary explanation as to why Democrats are so ineffective in proposing any really effective actions against this right-wing juggernaut is that they too have become painfully compromised and aware that their own positions as elected officials might just be threatened the next time they stand for election, when the Kochs or others of their ilk give four times this Democrat incumbent's re-election budget to their opponent. Could that have anything to do with why normally liberal Democrats like Senator Cory Booker and others also take huge compromising donations from big pharma and then vote against importation of safe and far cheaper drugs from Canada?

Citizens United and its ability for the rich to spend unlimited amounts on elections is still in place and not likely to be overturned by the Supreme Court as presently constituted or likely to be constituted in the next 30 years, if Trump winds up getting two more nominations to the Court.

Why is it that Left and other moderate opposition forces never seem to ask fundamental questions as to whether their proposed actions of opposition can be ignored with impunity by the oligarchy that now clearly controls this country and all its branches of government- both state and federal?

What other explanation could there be for a proposed Republican healthcare bill to replace Obamacare still being considered, when it has only somewhere between 12-17% support in this country?

What kind of effective opposition to this is accomplished by mindless unidirectional emails that continue to be sent out to prospective supporters under the disingenuous excuse of wanting them to vote or rank their issues of political and economic concern, when in fact the only reason these folks are being contacted is to ask them for money to institute actions and policies that don't have a snow ball's chance in hell of succeeding, given the present stranglehold that the corporate controlled Right has on all levels and branches of our government?

Simply stated, turning around the conservative agenda with things like a proposed repeal of Citizens United, voter registration reform or the ratification of the Equal Rights amendment require affirmative actions taken by clearly corporate dependent and dominated branches of government that will never bite the hand that is feeding them.

So why is it the Left never addresses this issue by actually proposing something that might get results and not just be more demoralizing to the majority of people in this country?

When one thinks of the 1st Amendment, the right to Freedom of Speech is usually thought of as being the most important. But I would argue that "the right of the people to peaceably assemble, and to petition the Government for a redress of grievances" is actually a much more practical and necessary right in a computer connected 21st century reality. In fact, it might be the only way if the democratic notion of majority rules is to continue to have any real meaning.

Could that be why the clear next target of those in power is net neutrality, which might still allow the majority in this country to finally realize and express its majority status through this venue?

But as of this writing, all that those supposedly opposing the oligarchy can seem to propose is a series of self-evident liberal platitudes sent out in unidirectional email communication that never solicit nor has the ability for those receiving them to address and organize their real concerns on specific issues.

A real democracy could take place in this virtual commons, which might just create the freedom of ideas and association and democratic power that goes along with it.

At the end of every presently patronizing communication of those disingenuously involved in supposedly confronting our 21st century version of fascism is always a request for more money to accomplish this task.

With no possibility for a real dialogue, one is left with the feeling that the money is all they ever wanted in the first place, which makes it hard for me to see much difference between these folks and the ones they oppose.

(Leonard Isenberg is a Los Angeles observer and a contributor to CityWatch. He was a second generation teacher at LAUSD and blogs at perdaily.com. Leonard can be reached at [email protected])