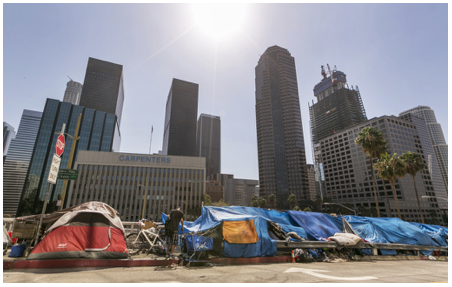 DRIP, DRIP, DRIP--LA City Planning this week released a backward-looking, slow-moving and poorly reasoned plan — more than a year in the making — that fails to reduce greed-driven evictions of residents, or to preserve thousands of low-rent units being eyed by land-flippers and speculators.

The proposals, heard on June 21 by the City Council Housing Committee, continue to favor developers, fail to stem the displacement of at-risk families, and solidify LA's worsening reputation as a homeless capitol filled with glittering wealth and mindless gentrification. Importantly, the proposals do nothing to rein in city politicians who are in a rush to approve as much luxury housing as possible.

Koretz, a member of the Housing Committee, told a standing-room only crowd," We can't build our way out, if we keep losing housing," describing developers' conversion of older low-cost housing into high-priced condos "not the most prominent cause of our loss of affordable housing ... but part of the drip, drip, drip."

Clearly unhappy, Koretz then added that profit-motivated developers who evict good tenants using the state's Ellis Act, "have devastated my neighborhood. I am sure all of the (demolished) apartments were rent-stabilized."

The Planning Department's half-baked proposals do little to address those problems. Here are five among several new proposals from City Planning:

Measuring vacancies to understand LA's gentrification crisis doesn't change the practices that created it. As long as the City Council and Mayor take campaign money from developers, they'll look the other way as "cumulative impacts" push renters out of their homes and onto the streets.

What we learned Wednesday: More than a year ago, in a technology update, the widely hated DWP quietly threw out the only tool LA had for measuring the rising number of luxury apartment vacancies — utility bills that show no or little power being used. So City Hall is now in the dark. DWP's explanation on Wednesday? "We didn't need to know about vacancies, it's not part of what we do" — so DWP created a new system that can't track vacancies. According to a City Planner, "It will be a challenge to get it from DWP, so we are trying for alternatives."

City Planning Idea 2) Provide the Planning Department staff with a way to measure the effect of "cumulative impacts" — the impacts of gentrification, Airbnb takeover of neighborhoods, spot zoning, and so on — upon LA's affordable, rent-stabilized apartments and other housing.

Our response:
LA is years behind San Francisco and other cities in conducting this research and developing protocols. LA leaders should call the experts such as the San Francisco Homeless Coalition, rather than continue to wonder and do nothing about LA City Hall gentrification policies that fuel skyrocketing rents.

What we learned at the hearing: A city planner said, “A protocol needs to be developed — to see what should be looked at.” To sum up, LA has no idea what to do. The City Council Housing Committee recommended a protocol be devised.

City Planning Idea 3) The city should look into the idea of a one-to-one affordable housing replacement requirement, to be required of luxury housing developers who tear down, or otherwise remove, affordable units.

Our response:
Again, San Francisco is far ahead of LA in such basic knowledge. As San Francisco found, a one-to-one replacement of affordable units creates, does not fix, affordable housing losses and here's why: For every 100 luxury units built, 40 affordable units are required to service the needs of the new luxury dwellers. It's one step forward, two steps back.

What we learned at the hearing: Under a rule known as "Value Capture,” developers would have to build affordable units if the developers wanted the City Council or the mayor's Planning Commissioners to keep handing them lucrative financial favors like spot zoning. But L.A.'s politicians have been sitting on the "Value Capture" plan since 2014.

What we learned at the hearing: The Planning Department has just started collecting data on how many rent-stabilized units are being destroyed by Small Lot Subdivision developments. “Without the data, we can’t jump to make policy decisions,” a senior planner said. Rats!

Our response:
The Garcetti Administration has had many years to crack down on improper demolitions of LA's older and still-affordable bungalows, apartments and duplexes. Yet LA developers ignore Building and Safety rules, and illegally demolish these buildings.

What we learned at the hearing: City Planning officials testified that a crackdown law has been in place for a year — Building and Safety withholds demolition permits from developers who don't prove they followed the rules. But apparently, because there's no bite, developers still ignore Building and Safety.

(Ileana Wachtel is Communications Director for the Coalition to Preserve LA.)