Details
ALADS Board of Directors 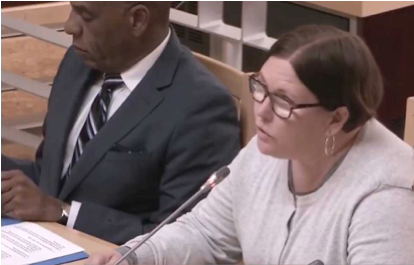 GUEST COMMENTARY-The false testimony given by Kim McGill of the Youth Justice Coalition during recent testimony before the Senate Public Safety Committee is greatly disturbing. As detailed in a blog by Michele Hanisee and Eric Siddall, Ms. McGill gave her testimony before the Senate Public Safety Committee to attempt to "humanize" overturning California law adding mandatory prison time for using a gun in a crime. Several Senators specifically cited her testimony as their reason to support the bill.

Despite her false testimony in Sacramento, some continue to treat her as if she has credibility. In the past week, she testified before the Los Angeles County Board of Supervisors and then was quoted in the media. Ironically, in that testimony she was complaining that a current county policy "erodes trust."

McGill is a frequent and vocal critic of law enforcement, with complaints about the "culture of law enforcement."  In fact, scarcely a month before her false testimony, McGill appeared before the Los Angeles County Sheriff's Civilian Oversight Commission to call for deputies to be prohibited from appearing in court if they had prior complaints of misconduct in their records.

We support free speech and have no issue with activists being given a public platform to provide their viewpoint on public safety issues. However, false speech should have consequences, as without any consequence deceitful actions will only be encouraged. While McGill believes prohibiting deputies from appearing in court is an answer for misconduct, we won't go so far as apply a similar version to her and call for barring her from speaking at any legislative hearing. Every person has a right to speak.

While any resident has a right to speak to the Board of Supervisors that doesn't mean what they say should be given any credibility. We borrow from the jury instructions in criminal cases where juries are told that if a witness deliberately lies about something significant, then the jury should consider not believing anything else the witness says. That instruction on credibility applies in full force to McGill.