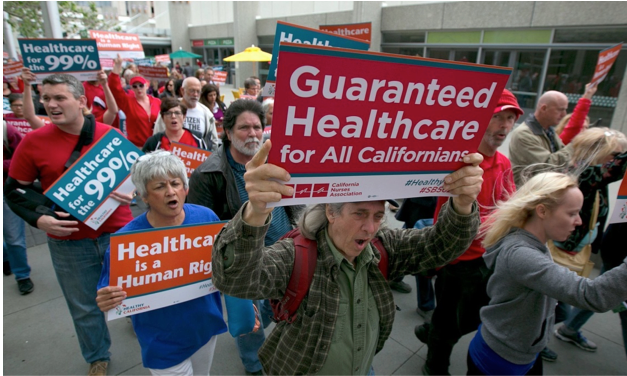 POLITICS--As Trump and the Republicans work to eliminate Obamacare and “replace” it with an economic unicorn that would wipe out health insurance for tens of millions Americans, some politicians in California are pushing for a single-payer healthcare system in the Golden State.

A bill (SB 562) recently introduced by Ricardo Lara and Toni Atkins passed the California Senate and is now in the Assembly. Legislative analysts hung a $400 billion per year price tag on it. Another study said it would only be $330 billion. Regardless, it’s a lot of money.

Some Assembly Democrats are balking at the potential cost and claiming single-payer healthcare can only be done on a federal level. According to them, California’s nation-sized economy (sixth largest, ranking between Britain and France) can’t handle it.

And yet many of these legislative invertebrates are the first to proclaim that healthcare is a right and not a privilege. A right that can’t be exercised is not a right.

Establishing universal access to healthcare as a right would be dramatic change in American culture. It will take courage to be the first.

Less than 200 years ago, the right to public education didn’t exist in most places in the United States. No government made parents send their children to school. In most cases, even those who wanted their kids to learn to read and write had to pay for the privilege. Schools were not a priority for government, and certainly not the federal government.

It wasn’t until 1837 that the state of Massachusetts established the first state board of education in the United States and appointed Horace Mann as its secretary. He fought for public schools and the right of all to attend them. I’m sure many taxpayers in the Bay State fought against paying for other people’s children to get an education at their expense; but, thanks to Mann, the concept of universal public education was established in this country.

Mann believed education was critical to making democracy work. He understood that citizens who could read and write would raise not just the economic level of the nation, but also be able to fully participate in government. By the end of the 19th century, the literacy rate in America was well north of 90 percent. Today, it’s nearly 100 percent.

Universal public education—as a right—spread from Massachusetts to the rest of the country. The fabled one-room schoolhouse stocked with McGuffey’s Readers is a time-honored American archetype. In the midst of the Civil War, the federal government provided money for establishing colleges, including the University of California. After the Civil War, compulsory school attendance laws were enacted.

The vast majority of Americans today believe that access to education is a right, one guaranteed by government using taxpayer dollars. It’s not in the Constitution, but Horace Mann and the people of Massachusetts made it happen.

Many of the things we take for granted started with a few people acting on a good idea. They didn’t quibble about the price tag. They understood the benefits far exceeded the cost. And they sure didn’t wait around for the politicians in Washington, D.C. to do it for them.

(Doug Epperhart is a publisher, a long-time neighborhood council activist and has served on the Board of Neighborhood Commissioners. He is a contributor to CityWatch and can be reached at: Epperhart@cox.net)