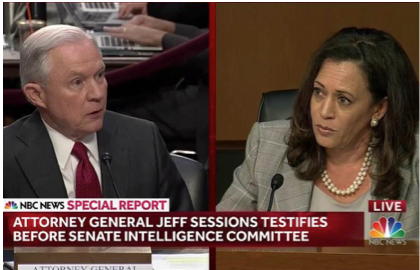 SENATE SEXISM ALIVE AND WELL--For the second time in as many weeks, Kamala Harris was cut off by her Republican colleagues while posing questions at a Senate intelligence committee hearing. To most, seeing yet another example of a woman silenced by male senators only reinforces the reality that there are different rules for the different genders, but many on the right remain stubbornly unwilling to acknowledge that a male-dominated government led by a pussy-grabbing misogynist would exhibit sexist attitudes toward women.

The first example took place on Monday, when Senator Harris was told to remember her place ― meaning not to raise her voice to a poor helpless man who was clearly having trouble answering a straightforward f*****g question. While grilling Deputy Attorney General Rod Rosenstein at Wednesday’s hearing, the junior senator from California was shushed by Richard Burr, the Senate Intelligence Committee Chairman, who essentially told Sen. Harris to pipe down. A sentiment that was echoed in yesterdays Sessions hearing, as she was again, interrupted in her pursuit of the truth.

So I did a little digging. If the reason is to be true, that fellow Senators felt Kamala Harris’ courtesy was in question, then where was their interruption when Angus King heavily pressed acting FBI Director Andrew McCabe? Saying, and I quote, “What you feel isn’t relevant, admiral.” Where was their interruption when Tim Kaine relentlessly pressed Rex Tillerson? Questioning whether the current Secretary of State was knowledgable enough to answer a simple question. The answers to both are of course, no.

So I’m confused. If it’s appropriate to throw the rulebook at Kamala Harris to remind her of her courtesy, shouldn’t that same rule book be thrown at male senators who have aggressively pressed witnesses for answers? Does the courtesy notice not extend to them? Or does it only apply to Harris, because as a woman, she is expected to be “polite” and “respectful” to her male colleagues?

But this selective treatment recalls another female senator who experienced the same belittling treatment after hurting some rich white guy’s feelings. Back in February, the same book of selective Senate decorum was tossed at Elizabeth Warren when Republican snowflakes took issue with her quoting Coretta Scott King. Senate Majority Leader Mitch McConnell was so outraged by Warren’s citing of these opinions about Jeff Sessions during his Attorney General nomination hearing, that he turned to the senate’s arcane and rarely-used Rule 19 to silence Warren. A rule that states “senators may not directly or indirectly, by any form of words, impute to another senator or to other senators any conduct or motive unworthy or unbecoming a senator.”

But again I must ask the same questions. Where was the use of Rule 19 when Ted Cruz accused Mitch McConnell of lying to his colleagues and the press, saying that McConnell “is willing to say things that he knows are false.” Hey Mitch, that sounds to me like he was directly impugning you there, mate, and he was using his own words and not quoting that you are a liar from someone in the past. No, he was calling you a liar to your face, but because he was a guy, you kept Rule 19 tucked away in your nice cowardly pocket. The same pocket that other male officials left their rulebook when Senator Tom Cotton went after Harry Reid, deeming his leadership “cancerous.”

So lets just put all of this into perspective, shall we. Elizabeth Warren quoting words from a letter was enough to trigger these male senators into addressing something other than their afternoon golf game, but blatantly calling someone a liar or ripping another senator for his “cancerous leadership” is not considered impugning a colleague. And on the issue of setting things straight, when a women presses for an answer she is silenced and told to be courteous, but when a guy does it he’s allowed to unleash the full wrath of his manliness.

Well, let’s just everyone take a moment to spare a thought for these men whose delicate sensibilities were so upset when they were pressed to stop dodging and answer questions from, dare I say it ... a woman.

(Francis Maxwell is a political correspondent for The Young Turks. Known for his in depth political analysis, Francis can be found specifically on facebook.com/theyoungturks or on twitter @francismmaxwell. Posted most recently at Huff Post.)