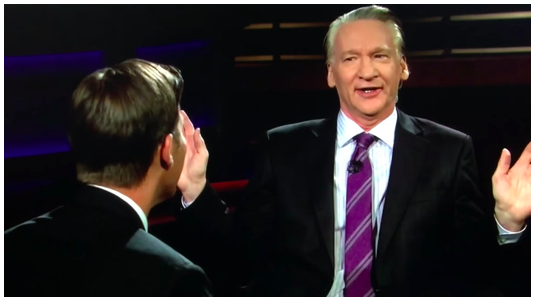 In it, there are no promises of humanity — no assurances of justice — no unbreakable bond of truth. There is but one king: popularity (and more plainly, profit).

These tenets, and the widespread adherence to them among American media, provide the perfect ecosystem for one citing the ills of our time. (This article discusses the use of a racial slur on Bill Maher’s talk show “Real Time,” and readers should be aware that it appears uncensored below.)

Entertainment media is just as vapid, vacuous, and apathetic as its creators — certainly, as much as its viewers — which is to say, it is naive to expect the industry to drift naturally toward some sort of moral center. It will not. It has not. And always, progress is wrought through a begrudging, draining, grating process.

In this vein, it was predictable from the moment Bill Maher, speaking to Republican Sen. Ben Sasse of Nebraska, uttered the word “nigger” on his show last Friday that he’d face no repercussions for doing so.

Maher: I gotta get to Nebraska more.

Sasse: You’re welcome. We’d love to have you work in the fields with us.

Maher: Work in the fields? Senator, I’m a house nigger.

In the immediate seconds to follow, Maher detected an uneasiness in his crowd, suggested he’d “just” made a joke, and earned himself supportive―even if implored―applause from his audience. Sen. Ben Sasse sat across from him, bearing a sheepish grin.

Maher released an apology the following day amid growing public outcry, with his employer HBO later releasing a statement of their own calling the comedian’s actions “inexcusable.” The network, however, levied no substantive punishment against Maher, who returned to his show on Friday to raucous cheers.

“Thank you for letting a sinner in your midst,” Maher joked on Friday, before announcing that Dr. Michael Eric Dyson would soon join him as a guest and “take [him] to the woodshed” for his actions.

The whole matter, from last Friday’s utterance to the conclusion of this Friday’s episode, was troublesome theater ― the chronicle of a racially insensitive joke from birth to burial, all before a predominately white audience while paying very little deference to black people who the joke concerned.

And it behooves anyone striving toward a progressive, equitable society to consider the harm inflicted over the past week and, more specifically, the grave dangers presented by Maher and others of his ilk ― be they well-meaning or not.

The cover-up is worse than the crime itself

It bears questioning, given HBO’s condemnation of Maher’s actions as “inexcusable,” precisely what the network meant in its statement. Behavior cannot, at once, be both inexcusable and bear no consequences. I instead chose a more literal reading of the word: there was no way Bill Maher would be excused from his job for “just” making a joke which invoked the word “nigger.” He truly was inexcusable for such a reason.

In this sense, racism is never inexcusable ― it is integral to our present society. Rather, it is the perpetrators of racism who are inexcusable ― never to be banished, always to be forgiven and welcomed among the masses. Espousing regressive views about people of color doesn’t deny you a television show. Often, in fact, espousing these views earns you one.

The function of HBO’s tolerance for Maher’s actions is that it provides cover for all acts of racism and racial insensitivity short of physical violence. The reluctance to levy any meaningful repercussions against a white man for using “nigger” quite literally suggests his so doing is tolerable and even explicable. If it is so (as their actions would suggest) that HBO believes a white comedian reserves allowance to invoke the term, they should be explicit in saying so.

It is their passivity amid this controversy which poses clear danger and also betrays the phenomenon of White Liberalism, a unique sort of performance art which has come into focus with the help of incisive social media scrutiny and the historic success of Jordan Peele’s film “Get Out.”

The prospect of continued national apathy to our plight ― and dismissal of our grievances ― is an ill omen.

Whiteness, in its very existence, is inherently dangerous; it is a fictitious character trait developed only as an antithesis to—and presumed class above — blackness. And Maher, as one of the foremost practitioners of whiteness, represents a particular danger because he serves our society as a caricature of radical liberalism, even as he spouts offensive rhetoric about people of color amid thunderous applause. Conservatives view him as a standard-bearer for liberal ideology, and his horde of predominantly-white viewers feels the same. The result of this assumption is that the confines of progressive thought, in the mainstream, rest at the feet of a man who called Black Lives Matter protesters “fucking idiots” and suggests ― at numerous turns ― that Muslims are the scourge of the earth.

Herein lies the dilemma: Without condemning outright people who are white, it must be said that Whiteness as a thought experiment is problematic. It is religion of its own, with a strict adherence to racial hierarchy that so often silences and marginalizes people of color.

Maher exists within the spectrum of oppressive voices because even as he conveys tendencies toward progressivism, his injection of racist vitriol and racial insensitivity into liberal ideology flows like ether through the bloodstream ― it desensitizes his audience to race matters throughout the country, which black people (and all people of color, more broadly) can ill afford.

This, of course, is not to say white liberals espouse a greater amount of racism than conservatives. There is no way to quantify such a thing. But Maher’s actions do speak to a particular strand of racism within each ideological camp; they illuminate a demoralizing similarity between the two.

And with people of color frequently relying upon white allies to serve as vehicles toward racial progress, the prospect of continued national apathy to our plight ― and dismissal of our grievances ― is an ill omen.

The show goes on

Dr. Michael Eric Dyson was not originally scheduled to appear on last night’s episode of “Real Time With Bill Maher.” Dyson, a friend of the show, was a late addition after Senator Al Franken (D-Minn.) declined to appear in the wake of Maher’s comments.

The normalcy of Friday night’s “Real Time” episode rested heavily upon Dyson’s shoulders. He was, according to the host, there to “school” Maher, because as he said, he’d “done a bad thing.”

It was a bizarre endeavor from start to finish, feeling intensely as though an employer had commissioned an employee for a special assignment. Dyson, a titanic author on his own, was offered space to promote his book; his friend and host received much-needed cover in exchange.

Dyson, at one point, explained to Maher the history of the slur, its roots in chattel slavery and its function as a reiteration of black subservience to whites.

“[S]urely, you must know all that wasn’t going through my mind, right?” Maher said.

It was left unclear why Dyson or any black person must know this.

Nonetheless, the interview continued with a number of similarly defensive statements from Maher:

“It’s not like I made a career with this.”

Maher has, indeed, made a career of offering problematic postulations on race, gender, sexuality, and religion.

“I don’t wanna pretend this is more of a race thing than a comedian thing.”

There was no reason provided as to why these two would be mutually exclusive. A white comedian feeling entitled to employ a term appropriated by black people to supplant their oppression would seem a perfect intersection of these two “things.”

During the interview, Maher even made a point of conveying to the audience how formidable an inquisitor Dyson was, saying “I feel like I got Robert Mueller here” in reference to the special prosecutor investigating the Trump administration.

These and such moments offered a glimpse into the host’s motivations. Dyson, with all his bonafides and charm, had been reduced to a prop ― a character in a professional wrestling shoot bringing the ever-resilient fan favorite down to size. And even rapper Ice Cube, the show’s final guest whose stern criticism of Maher made for riveting television, seems to have garnered Maher favorable coverage, with numerous publications using “owned,” “schooled,” and similar words to describe the exchange.

It is not apologies which will save us, but rather deep, occasionally dark peers inward.”

Even as Maher bristled when Cube suggested he occasionally sounds “like a redneck trucker” and noted the “root of [Maher’s] psyche” is worth evaluating, media emerged Saturday morning with the narrative that Maher had been appropriately and adequately mollywopped by his guests ― Dyson, Cube, and Symone Sanders, the former press secretary for the Bernie Sanders campaign who took time to explain dynamics and plight of slaves relegated to working inside and outside the plantation.

The parade of black bodies on-screen was discomforting, if for no other reason than the suggestion that black people can, should, and must instill humanity and anti-racist ideology into oppressive, white counterparts. The onus of reconciliation frequently rests with the victims, as though racism and oppression is always some passive, unconscious act to which its perpetrators are blind.

Very rarely, if ever, do we demand these perpetrators wrestle with their demons and stand before the world―lone, bare, honest, and eager for reform.

Had Bill Maher elected to host a show on Friday boasting no black guests, I would have defended and appreciated it, because it would have marked an instance of fleeting ― but valuable ― introspection. He very easily could have used the week to think critically on his own, but he determined instead that playing whipping boy for an hour better suited his interest.

The demand from professed white liberals must increase. Without question, white people who are liberal carry great potential to advance racial progress, but White Liberalism ― the thought experiment ― must adopt a more radically progressive racial parlance if we are to ever see true equality.

And it is incumbent upon those with a vested interest in human progress to require ― not request ― this progress, even from the most powerful and privileged among us (Bill Maher included). It is not apologies which will save us, but rather deep, occasionally dark peers inward.

I was cautiously optimistic about this prior to hearing guest David Jolly, the former U.S. Representative from Florida, offer his musings:

“You apologized, and at some point, America has to accept apologies. God bless you for apologizing.”

And the crowd went wild.

(Ja’han Jones is a contributor to Huff Post … where this piece originated.)