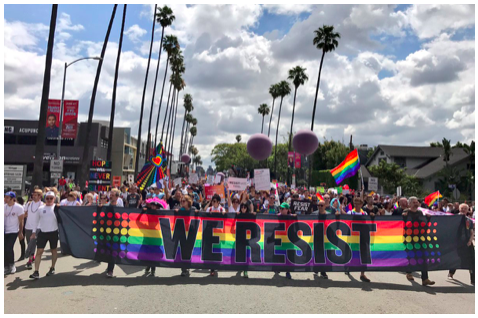 THIS IS WHAT I KNOW-You are me and I am you. And we are one. We are here today to send a message loud and clear…We resist homophobia; we resist poverty, anti-Semitism, and we resist hatred toward Muslims and all religions. – Rep. Maxine Waters (D-Los Angeles)

According to #ResistMarch founder Brian Pendleton, over 100,000 marched, danced, protested, and listened to an impressive speaker lineup at Sunday’s event that was transformed from Gay Pride to address the policies and agenda of President Trump and his administration.

The origins of the annual event have long focused on pride but this year, the stakes are high with proposed healthcare changes that will impact care of HIV and AIDS patients. We already see legislation restricting transgender rights in at least 11 states. Rep. Adam Schiff began his empowering speech by riling up the crowd with, “This year, we are proud as ever but we are also mad as hell.”

Nancy Pelosi appealed to march participants to reach out to friends and family in red states in support of amending and expanding the Civil Rights Act of 1964 with the Equality Act, a bill that would aim to end discrimination against LGBTQ Americans.

While there was definitely a strong message to uphold and expand the rights the LBGQT community has gained, the speakers also referenced issues such as climate change, healthcare, immigrant and reproductive rights – and turning the tide in the 2018 midterm elections.

The tagline of the march is, “When they come for one of us, they come for all of us,” appealing to participants to support each other across all lines.

Several of the speakers referenced the history of the Gay Rights movement and the challenges the community has faced over the years, from the HIV/AIDS crisis in the 1980s and 1990s to Proposition 8.

West Hollywood Councilman John Duran enlightened the crowd about the origins of the initial protests. He described the 1967 police raid on Silver Lake’s Black Cat Bar in which same-sex couples were arrested for kissing each other. “Our forefathers and mothers fought and resisted against that unjust law,” he added.

President of the Human Rights Campaign Chad Griffith described the 2008 passage of Proposition 8, which had banned same-sex marriages in California, leading to protests and court challenges, eventually resulting in the U.S. Supreme Court recognition of gay nuptials. “We built coalitions and changed hearts and minds,” he said, “Just like Proposition 8, we are going to defeat Donald Trump.

The long-standing activism of the LGBTQ community has influenced activists from numerous marginalized groups over the years. By enlightening younger activists and would-be activists, as well as pulling together people who believed they’d never have to fight the same battles they had when they were younger, events like #ResistMarch empower Americans to take this country back, fighting against discriminatory policies and making sure America is for all of us, not just a few.

For additional information about the next step, visit the #ResistMarch website.