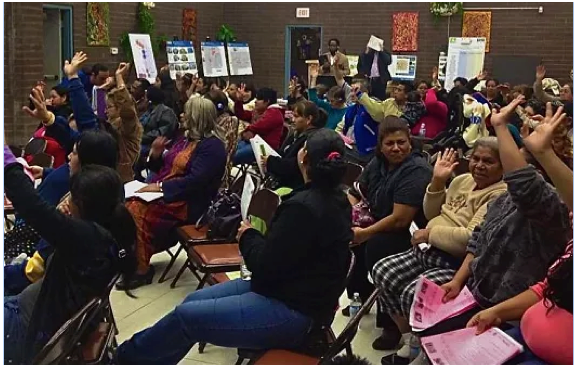 PLATKIN ON PLANNING-Last week I explained why Los Angeles is so poorly planned, but there is no reason that Angelinos must be tied to the substandard city planning that emanates from City Hall. It is one thing to explain it, as I did in my previous column, but it quite another thing to put up with it.

Unfortunately there is no silver bullet to prevent this ship from sailing straight into the rocks of infrastructure failure, natural and manmade disasters, climate change, homelessness and overcrowding, and visual blight, all aggravated by building the wrong market-driven buildings in the wrong place at the wrong time.

As I explained last week, some of the push back against this “anti-planning” takes the form of new voter Initiatives, such as the rumored “Son of S,” well-orchestrated public outrage over particularly odious buildings or plans, and lawsuits against the real stinkers, such as 8150 Sunset.

But, we should also consider a strategy used in other cities, like New York City, called bottom-up planning. This approach is in sharp contrast to LA’s top-down, market-driven quasi-planning, in which a group of well-connected, well-off insiders hobnob with elected officials and the Planning Department hierarchy. In private they devise new ordinances and plans that grease the wheels of real estate speculation, while snugly lining pockets in and out of City Hall.

As this soft corruption continues unabated at City Hall, bottom-up planning could expose and then deflect such schemes with new plans and overlay zones that express the interests of local residents, not outside real estate speculators.

Bottom-up planning takes several forms, and Sherry Arnstein prepared the definitive article on this alternative approach to planning in the late 1960s. Entitled A Ladder of Citizen Participation, her article is still widely quoted and clearly presents the difference between the top-down planning model used in cities like Los Angeles, and bottom-up model that residents of other cities, especially New York City, have turned to. 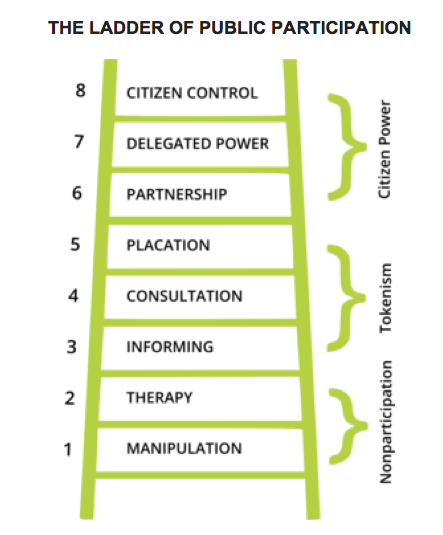 THE LADDER OF PUBLIC PARTICIPATION

The most common form of citizen participation in Los Angeles has been public meetings, which corresponds to tokenism in Arnstein’s model. City staff takes the pulse of many local groups when preparing both citywide and local plans and zoning ordinances. For example, here in LA, City Planning organized several hundred public meetings to prepare the General Plan Framework Element in the mid-1990s. This is in sharp contrast to the current model, which largely relies on comments posted to City websites.

Another model, once common in Los Angeles, but discarded several decades ago, is citizen advisory committees. This rejected model was, however, revived for the re:code LA project. In this unique case, City Hall filled the advisory committee with hand-picked representatives from the real estate sector. When completed, re-code LA will grant their clients vast amounts of increased property valuations through new form-based zoning ordinances.

Stepping down the ladder of public participation, City Hall now relies on occasional evening workshops and legally required daytime public hearings before decision makers. At these meetings, members of the public – at least those who are retired or self-employed – are allowed by officials to have one minute to present their superfluous oral testimony.

While many more public meetings and hearings are welcome, they must be matched with extensive scrutiny to make sure that City Planning’s new General Plan elements and zoning ordinances are based on these public comments. If not, then the public meetings and hearings amount to what Prof. Arnstein called “therapy.” The one minute in front of the microphone might feel good, but it is totally peripheral to LA’s top-down land use decision-making process.

The alternative to LA’s current top-down land use decisions is what Prof. Arnstein called citizen power. It takes the form of partnerships, delegated power, and actual citizen control. At LA’s City Hall, such approaches would be anathema, even though some Neighborhood Council members confuse their own hearings and resolutions on local real estate projects with the real decisions made by Zoning Administrators, the Director of Planning, the City Planning Commission, and the City Council.

What would bottom-up planning actually look like in LA?

We do know that effective bottom-up planning would need to be asserted. This is because there are no political forces at City Hall that would voluntarily grant decision-making authority to local communities. This would not only break the bond between current decision makers and the real estate sector, but would allow the public to determine the City’s operational and capital budgets, as well as Departmental work programs. At City Hall all parties would heavily resist these changes.

Nevertheless, neighborhood groups such as tenant unions, homeowner associations (HOAs), and Neighborhood Councils should not be deterred. They can and should prepare their own plans and overlay zones, based on their own public workshops and hearings. They can also write and disseminate their own background reports, which would presumably focus on deficient public services and infrastructure, not the rampant up-zoning and up-planning that are now the hallmark of City Hall’s top-down plans and zoning ordinances. These neighborhood groups can even prepare their own draft Community Plan Updates, an approach already undertaken by the East Hollywood Neighborhood Council Planning Committee.

Of course, City Hall would do all it could to ignore, disparage, and subvert these community-driven workshops, hearings, and their resulting plans and overlay zones. But, the more this happens, the harder it will be for City Hall to push through new plans and implement zoning ordinances that result from their closed door meetings with real estate developers.

How would top-down planning differ from bottom-up planning?

In addition to a wholly different process, the content of the plans would undoubtedly be radically different. While the General Plan covers the entire land mass of Los Angeles, at present, the City Council only implements it in one narrow way: mostly with an up-zoning ordinance. The rest of what constitutes planning, as defined by the content of the General Plan, such as transportation systems, public housing, streets, sidewalks, urban forests, schools, parks and open space, aquifers, public and regulated utilities, public services, or even enforcement of zoning ordinances, is totally ignored.

But just because the top-downers define the General Plan and its implementation in such a blinkered way does not mean local groups should follow suit. In fact, they need to comprehensively plan for their own communities, which means their primary focus should be the public sphere, not kowtowing to real estate developers and their single-minded focus on re-zoning their properties.

This will not be an easy sell at City Hall, but community groups should not be deterred. After all, every time officials dig in their heels to stop them, they are really signaling to the public that they are moving in the right direction.

(Dick Platkin is a form LA city planner who reports on local planning issues for City Watch. Please send any comments or corrections to rhplatkin@gmail.com.) Edited for CityWatch by Linda Abrams.