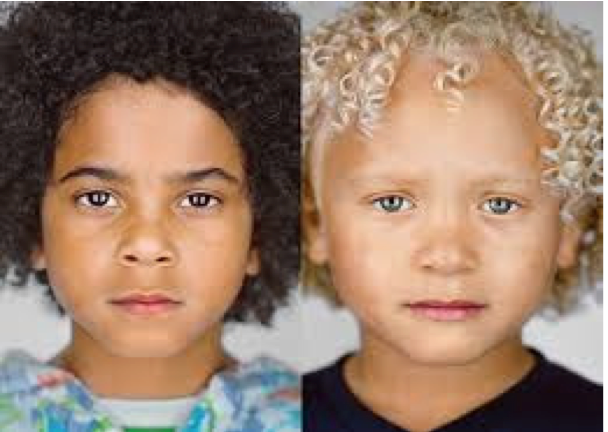 GUEST WORDS--It's hard not being near the top of the political food chain. It's tough being white, proud, and so easily threatened by this:

As has been increasingly obvious, “Racial attitudes made a bigger difference in electing Trump than authoritarianism.” Part of that is the sense that growing ethnic and racial diversity is a threat to white supremacy and status. Not necessarily in the Klan sense, but in the societal privilege sense. “When you’re accustomed to privilege, equality feels like oppression”:

A poll last week indicates nationwide attitudes are definitely shifting, just ever so slowly. Like when they threw the wheel on the Titanic hard over and she kept heading straight for the iceberg for what seemed like minutes before beginning to turn.

In 2015, 17% of all U.S. newlyweds had a spouse of a different race or ethnicity, marking more than a fivefold increase since 1967, when 3% of newlyweds were intermarried, according to a new Pew Research Center analysis of U.S. Census Bureau data. In that year, the U.S. Supreme Court in the Loving v. Virginia case ruled that marriage across racial lines was legal throughout the country. Until this ruling, interracial marriages were forbidden in many states.

More broadly, one-in-ten married people in 2015 – not just those who recently married – had a spouse of a different race or ethnicity. This translates into 11 million people who were intermarried. The growth in intermarriage has coincided with shifting societal norms as Americans have become more accepting of marriages involving spouses of different races and ethnicities, even within their own families.

The most dramatic increases in intermarriage have occurred among black newlyweds. Since 1980, the share who married someone of a different race or ethnicity has more than tripled from 5% to 18%. White newlyweds, too, have experienced a rapid increase in intermarriage, with rates rising from 4% to 11%. However, despite this increase, they remain the least likely of all major racial or ethnic groups to marry someone of a different race or ethnicity.

The decline in opposition to intermarriage in the longer term has been even more dramatic, a new Pew Research Center analysis of data from the General Social Survey has found. In 1990, 63% of nonblack adults surveyed said they would be very or somewhat opposed to a close relative marrying a black person; today the figure stands at 14%. Opposition to a close relative entering into an intermarriage with a spouse who is Hispanic or Asian has also declined markedly since 2000, when data regarding those groups first became available. The share of nonwhites saying they would oppose having a family member marry a white person has edged downward as well.

Stormfront commenters were less sanguine about what that meant. One wrote,"... it just seems America is officially over. This WILL be a complete third world nation within thirty years. Absolutely finished." Strange, because when Obama became president and the T-party rose up, Ann Coulter declared "we don't have racism in America any more" like it was a good thing. Despite Pat Buchanan lamenting “The End of White America,” in Shelby v. Holder, Chief Justice John Roberts declared. “Our country has changed."

Ask black voters in North Carolina how much.

After calling for President Trump's impeachment, U.S. Rep. Al Green of Texas received racially tinged threats. He played a few voice mails for a town hall meeting Saturday: The seven-term Democrat told the crowd of about 100 people that he won't be deterred.

One male caller used a racial insult and threatened Green with "hanging from a tree" if he pursues impeachment. Another man left a message saying Green would be the one impeached after "a short trial" and then he would be hanged, according to the recording.

Green took to the House floor on Wednesday to say he believes Trump committed obstruction of justice and no one's above the law.

The good news is their numbers are shrinking, but as Jesus said, bigots you have with you always. Or something.

(Tom Sullivan is a North Carolina-based writer who posts at Hullabaloo and Scrutiny Hooligans. A former columnist for the Asheville Citizen-Times, his posts have appeared at Crooks and Liars, Campaign for America's Future, Truthout.org, AlterNet, and TomPaine.org.) Prepped for CityWatch by Linda Abrams.