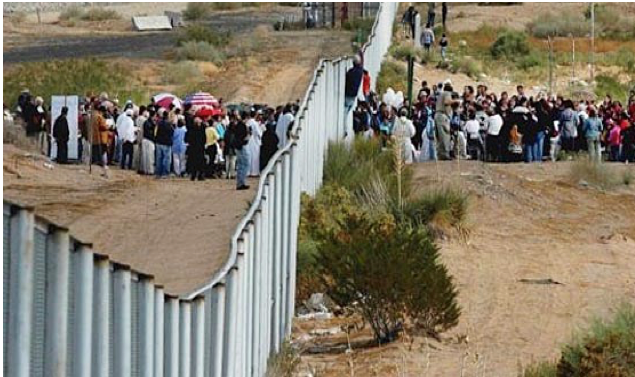 LEANING RIGHT--May Day!  May Day!  The LA Times Editorial Board gets it wrong again, and shreds both its credibility and subscribing membership yet again!

So how well has the City and County of LA done with only one major paper editorializing and spinning reality?

And when do the thorny issues surrounding legal and illegal immigration finally get confronted by the Times Editorial Board?

As a former subscriber and former regular reader of the Times (since childhood), I feel kinda bad because I've met and befriended many a Times reporter who adheres to principles, balance, and reality. But it's nice to be free of the kooky, alternative world of the Times Editorial Board (which is a different group of people than its reporting staff).

But while the Times overall readership continues to spiral downward (partially because of the global trend away from print readership), its editorial board continues to please its loony/lefty adherents while annoying a greater number of current/former regular readers who recognize the Times' continued decline into its self-made oblivion formed of ivory tower irrelevance ...

... and an irrelevance that has Orwellian overtones.

Whether one loves or hates the Times, one can't ignore the fact that Trump won this past election because so many Americans have "had it" with the biased and "we know more than you" attitudes of newspapers (like the Times) that fly in the face of Common Sense.

And whether one loves or hates the Times, a not-so-big secret is that while a mere hundred days of President Trump has federal laws and policies changing more rapidly than anyone could have ever guessed, in response the City and County of Los Angeles and the State of California have been lurching angrily leftwards for a variety of reasons that all ignore an inevitable bankruptcy of the state and its cities.

The immigration question is, as with other issues, tied to the fact that the middle class is shrinking in California, and our governmental budget is being paid for by a shrinking and over-taxed minority holding up the state:

1) University of California President Janet Napolitano's vow to protect "immigrant students" from President Trump's crackdown on illegal immigrants flies in the face of a damning audit of the UC system.

The top staff of the UC president's office overpaid top staff and mishandled budget money, while hiding $175 million in surplus money while calling for bigger budgets and higher tuition costs.  The Times reporters do their job, while the Times Editorial Board actually has the nerve to defend Napolitano while admitting her screwups.

And while other papers are not so quick to defend Napolitano, too many of us are missing the big picture:

There is no one in either Sacramento or among the UC Regents defending the struggling, exhausted California taxpayers in restoring affordable tuition with the same vigor that they are protecting "immigrants".

2) Of course, there are two infuriating and confounding realities for us all to confront in California--and President Trump was elected by many of the other fifty states to avoid having the entire nation fall into the same trap that we now are stuck with in California.

First, illegal immigrants broke the law to enter the United States, while legal immigrants did not break any laws...and to confuse the two groups is a raw slap in the face to those who believe in the rule of law.  There very much IS a difference between legal and illegal immigration.

Feel free to ask legal immigrants about illegal immigrants...and you will untap a fury that makes "nativist" Americans' anger appear to be a slight annoyance in comparison.

Legal immigrants believe in a rule of law and have fled their countries of origin to escape the consequences of lawlessness, while illegal immigrants (and more importantly, their knowing and money-grubbing employers) all-too-often are more than happy to break the law when it serves their purposes.

So when Baltimore and other states and local governments start asking and instructing prosecutors to avoid charging illegal immigrants with minor, non-violent crimes to avoid immigration enforcement by the Trump administration, the same question comes up as it does with UC tuitions and taxpayer rights:

3) While one in eight children in California schools have an "undocumented" parent, the question of whether our educational budget and priorities becomes more difficult to answer.

Because if an illegal immigrant has three children who are educated from K-12 at roughly $10,000 per year, the resultant $400,000 spend on those three children begs the question of what our amount spent per student would be if we enforced immigration law in California...

...and where that $400,000 could go if it were spent on legal citizens and legal immigrants, who pay by far more in taxes than illegal immigrants.  Roads?  Adding on to our UC and Cal State system?

So while the children can't be blamed for the actions of their parents, when DO we take the parents to task for appropriating funds from the taxpayers that are NOT legally theirs?

Should the children be forced to pay out-of-state college tuition to make sure they don't benefit from their parents appropriation of others' tax funds, and to reimburse the taxpayers for their parents' illegal actions?

Should those here illegally for decades be given a slap on the wrist, or be made to pay a much larger fraction of the six-digit figure they have inevitably taken from their neighbors?  Perhaps should their employers pay?

Or should the United States freeze and confiscate any U.S. assets from the illegal immigrants' countries of origin that we could use to reimburse the taxpayers?

In the end, it comes down to whether those here illegally (and their lawbreaking employers) owe the taxpayers and law-abiding citizens and legal immigrants of California, or vice versa.

Because what SHOULD we do to those employers of illegal immigrants, and those employers who violate the intent of foreign hiring laws to save on employer wages ... and who who really are at the center of this problem and are a big reason we now have Trump as our President?

Whether it is California IT workers, or whether it is Disney, or whether it is Silicon Valley, American workers are being shafted and destroyed by ruthless employers (some proclaiming to be liberal and loving of "diversity") who will do anything to reduce labor costs.

So while many on May Day will be protesting Trump and his policies, including those on illegal immigrants and those who feel workers' rights are being hurt by Trump, it will not be hard to critique those doing the marching as undermining their own causes: from the environment to workers' rights to income inequality, California and its cities are doing everything wrong by promoting lawbreaking.

In short, the Times Editorial Board continues to lead local and state government down the wrong path, and will continue to believe God is on their side (if they even sanction a belief in God) while sending those still gullible enough to adhere to the Board's views down the rabbit hole that is our City and state's misguided direction.

Meanwhile, the rest of us are left to wonder when it's our turn to flee the City of the Angels, or even to leave the state altogether, in order to find a community that's not overdeveloped, and where both attainable employment and the cost of living allows hard-working middle-class families to thrive and prosper the way they used to back when California was once the Land of Opportunity.

(Kenneth S. Alpern, M.D. is a dermatologist who has served in clinics in Los Angeles, Orange, and Riverside Counties. He is also a Westside Village Zone Director and Board member of the Mar Vista Community Council (MVCC), previously co-chaired its Planning and Outreach Committees, and currently is Co-Chair of its MVCC Transportation/Infrastructure Committee. He was co-chair of the CD11 Transportation Advisory Committee and chaired the nonprofit Transit Coalition, and can be reached at [email protected]. He also co-chairs the grassroots Friends of the Green Line at www.fogl.us. The views expressed in this article are solely those of Dr. Alpern.)