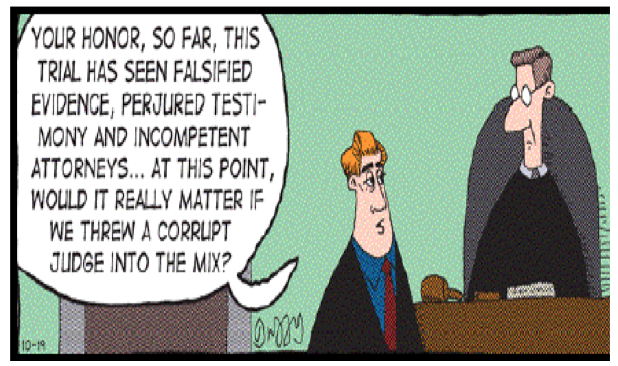 CORRUPTION WATCH-When medicine bottles are filled with poison, people die. The most famous incident was in October 1982, when someone laced Tylenol capsules in the Chicago area with cyanide, resulting in seven deaths. While the nation moved quickly to guarantee the safety of over-the-counter medicines, the adulteration of our judicial system has been pandemic for generations.

From civilization’s beginning, mankind has striven to develop institutions that ensure an honest and just society. In the beginning of Genesis, we learn about the corrupt judges in Sodom. Their abuse was so destructive that they were named Liar, Habitual Liar, Deceiver and Perverter of the Law. According to Jewish tradition, these judges so adulterated Sodom, that God destroyed the city and all its inhabitants. From a moral stand point, filling political institutions with poisonous men is as lethal to society as putting cyanide in medicine.

One difference between lacing Tylenol capsules with cyanide and allowing corrupt people to have positions of importance is that corruption is slow acting and spreads insidiously until the entire society becomes morally bankrupt. The first injustice by a Sodomite judge did not cause fire and brimstone to hail down on Sodom. Cruelty and injustice enriched some Sodomites, causing extreme harm to their victims. As the corruption spread, evil dominated without any thought that a day of reckoning would arrive.

During the 1770s, people in the American British Colonies became displeased that the Crown was contaminating British institutions. The colonists believed there should be no taxation without representation. They believed they were entitled to impartial courts when they had just grievances against the Crown. But King George and Parliament believed otherwise and saw no reason that their “Tylenol” bottles should not also contain tyranny. The King’s courts were a farce. Like in Sodom, truth, honesty, and justice had been supplanted by power. The colonists expressed their displeasure with this adulteration of the judicial system in the Declaration of Independence, stating: “He has made Judges dependent on his Will alone for the tenure of their offices, and the amount and payment of their salaries.”

Our Declaration of Independence posited that all individuals have certain inalienable rights and among these are Life, Liberty and the Pursuit of Happiness. We drafted the U.S. Constitution to secure the Blessings of Liberty, not to continue the rule of tyrants. The foremost objective of the judiciary is to protect an individual’s fundamental rights. The legal system is not to be manipulated for the benefit of the rich and powerful.

For decades, the Los Angeles Police Department (LAPD) was an abusive occupying force in South Central Los Angeles (aka Watts) where, in 1965, police brutality after the stopping of a black motorist triggered six days of violence and civil unrest. There was $40 million ($308 million in 2017 dollars) in property damage and 34 deaths. The unrest was fueled not only by the racist nature of the former LAPD, but also by the courts when they backed up a police department that engaged in the brutalization and criminalization of the Black community.

Twenty-six years later, in 1992, Los Angeles again erupted in violence with the worst civil unrest since the Civil War – with 54 dead and $1.5 billion (in 2017 dollars) in property damage. Again, a poisonous judiciary had been crucial in the breakdown of civil society.

After decades of police brutality and a corrupt court system, the Black Community believed that with the video of the beating of Rodney King, there would finally be justice in at least one case. The appellate court knew better. The Simi Valley jury consisting of 10 whites, one Hispanic and one Filipino acquitted all the officers.

As the violence mounted in South Central Los Angeles in response to the acquittals, the police pulled back, leaving citizens and businesses defenseless to marauding thugs. When a white truck driver, Reginald Denny, was yanked from his truck at the intersection of Normandie and Florence, no police or National Guard responded. Instead, local people (Bobby Green, Lei Yuille, Titus Murphy and Terri Barnett) who saw the brutal attack on TV, rushed from their homes and saved Reginald Denny’s life. Many people do not want to acknowledge the social disintegration unleashed on Los Angeles that was caused by the appellate court’s moving the trial to Simi Valley.

Decades later, in 2015, when three federal judges told us our State Court system has suffered from an epidemic of misconduct, we shut our ears and allowed the sadistic abuse to continue. In January 2015, the Federal courts complained about state court prosecutors’ committing perjury in order to obtain convictions, but their real target was the Chief Justice of the California Supreme Court, Tani Gorre Cantil-Sakauye.

The three judge federal panel identified the cause of the epidemic of misconduct as the California court system itself which turned a blind eye to lying jailhouse informants, prosecutors who took the stand and committed perjury and a host of other misdeeds. If Chief Justice Cantil-Sakauye, who has held her position since July 22, 2010, had taken remedial steps in the intervening four years, one of the three federal judge would have taken note.

However, since January 2015, the Chief Justice seems to have done nothing to remove the poison from our judicial system. According to The Orange County Register, “The U.S. Department of Justice launched a civil rights investigation of the Orange County District Attorney’s Office and the Sheriff’s Department on Thursday (December 15, 2016) over allegations that prosecutors and deputies withhold evidence and use jailhouse informants to illegally obtain confessions.”

A significant number of judges are former prosecutors, so they are very familiar with these illegal tactics and recognize when they are deployed in their courtrooms. The complaints of the cyanide in the Orange County courts pre-date the complaints by Judge Kozinski in January 2015. Nonetheless, it takes another federal agency to investigate the same type of vile betrayal of public trust which we saw 4,000 years ago in Sodom and Gomorrah.

Angelenos should not become complacent by thinking that these abuses are relics of bygone eras. Facts and fiction are still fungible commodities in courtrooms. No fact can be too firmly rooted in reality for a judge to proclaim that its opposite is an Undisputed Fact; perjury which favors a judge’s position is preferable over truth. Just as no one knows when the weight of economic frauds will again crash the economy, no one knows when judicial corruption will cause another outbreak of violence.