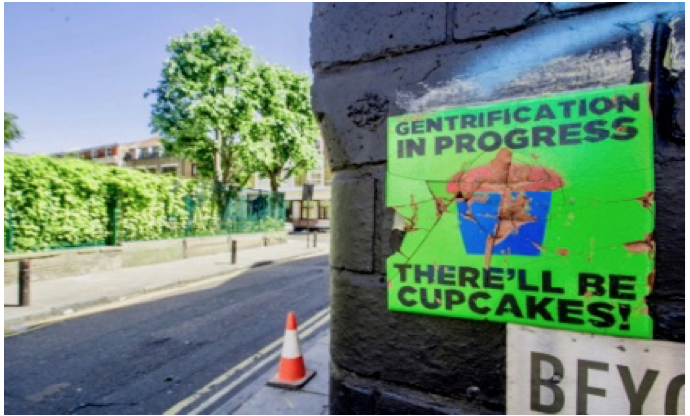 LOS ANGELES … ONLY THE RICH NEED APPLY--From Los Angeles to Berlin, developers and politicians, not to mention the “new urbanists,” are creating a global gentrification crisis – and it’s not just the poor who are getting hurt. We first came to understand the ugliness of gentrification in Los Angeles.

In LA, gentrification has been fueled by the City Council and Mayor Eric Garcetti’s willingness to grant “spot-zoning” approvals to deep-pocketed developers who want to build luxury-housing high-rises.

For example, the city’s General Plan and community plans lay out zoning rules for what can and cannot be built in neighborhoods. So a 20-story luxury-housing tower cannot go up in a community that’s only zoned for four-story buildings.

Over the past few years, however, developers have gone to the L.A. City Council and Garcetti, with checkbooks in hand, asking for zoning exemptions – or “spot-zoning” approvals. After taking thousands of dollars in campaign contributions and other political cash, such as money for a council member’s “officeholder” account, the City Council and Garcetti almost always deliver the favors.

Developers then demolish an older building with affordable housing units to construct a luxury high-rise with over-priced apartments or condos. Or, developers throw up a luxury tower on a piece of land that’s not normally zoned for that kind of project.

Developers make tens of millions, if not more, in profits from spot-zoning approvals. But residents and neighborhoods, especially if a luxury high-rise goes up in a working- or middle-class community, feel the pain.

Residents in an affordable apartment building that’s slated for demolition lose their homes from the get-go. And more times than not, there’s no way they can afford the exorbitant rent at a new luxury-housing tower that offers such fancy amenities as concierge service, a gym, and, believe it or not, a dog park. A senior citizen or housekeeper or struggling artist is out of luck while a happy dachshund gets world-class treatment.

Adding to the displacement, the luxury tower jacks up rents for residents in other buildings in the neighborhood—and a once affordable community becomes less affordable. Not only are those residents forced out, but lower- to middle-income people can no longer move in.

We saw this disturbing trend take place across LA – from the lower-income, Latino Eastside to the middle-income, white San Fernando Valley to working- and middle-class neighborhoods on the Westside to lower-income, African American South LA More than 20,000 affordable units have been taken off the market in LA since 2001 to make way for some form of luxury housing.

It didn’t matter what color you were, although people of color often got screwed the worst. If you weren’t making an annual salary of $100,000 or more to pay for higher rents, you were displaced – and a one-time worki ng- or middle-class neighborhood became gentrified. 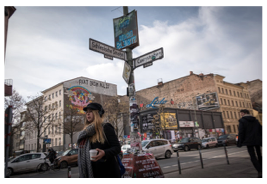 Similar scenarios are unfolding in London, Portland, Berlin, (photo left) and numerous other cities across the United States and the world.

It’s particularly pervasive today. Deep-pocketed developers are on a spending spree around the world, buying up properties in major cities and building luxury projects or converting affordable housing into luxury housing.

In the United States, according to Zillow, developers are building all kinds of high-end apartments and condos, but are not construct enough housing for lower-income people. Politicians allow this to happen by either failing to come up with land-use policies that prevent widespread gentrification or they approve luxury projects that are not normally allowed under a city’s zoning rules.

More and more, community activists are fighting back, which is happening in Berlin, London, New York, and Los Angeles, where numerous neighborhood groups supported a development reform initiative known as Measure S.   LA’s political establishment hated it, and developers spent millions to kill reform. After all, they didn’t want a broken system that helped them make billions in profits and millions in campaign contributions to be fixed. Measure S ultimately failed at the ballot box this past March.

But the initiative did jump-start a much-needed, citywide discussion about troubling land-use policy, gentrification, corruption at LA City Hall, and a severely broken development approval process. That discussion, and neighborhood activism, will only continue in LA.

Luxury-housing developers and politicians either ignore or refuse to acknowledge the serious, street-level problems they are creating. The same goes for the “new urbanists,” as they call themselves. They push for more dense cities regardless of what kind of housing is built. They just want density, density, density.

Many urban planning academics are just as bad. They say the best way to lower rents and to cure housing shortages is to simply build more housing—the supply-and-demand theory. Developers then cite the academics and new urbanists to justify their luxury towers to the public and politicians. With that political cover provided by the “experts,” the developers build more high-end housing.

That’s what Zillow recommended — developers must construct more housing for lower-income people, which includes the middle-class.

Developers, academics, new urbanists, and politicians don’t want to discuss that. It messes with their economic, political, and/or ideological agendas. (Yes, “new urbanism” is an ideology.)  The affordable housing crisis then worsens, luxury-housing prices are sky high, rents in the neighborhood keep going up, and working- and middle-class folks keep getting pushed out.

If gentrification continues to go unchecked, it will have devastating, long-lasting, multi-pronged impacts, and the world’s metropolises will become luxury cities that only the affluent can afford. Everyone else will struggle to make ends meet – or get the boot.

(Patrick Range McDonald, an award-winning investigative journalist, worked on the Measure S campaign as senior researcher and website editor. This perspective was posted first at LA Weekly and most recently at washataw.com.)