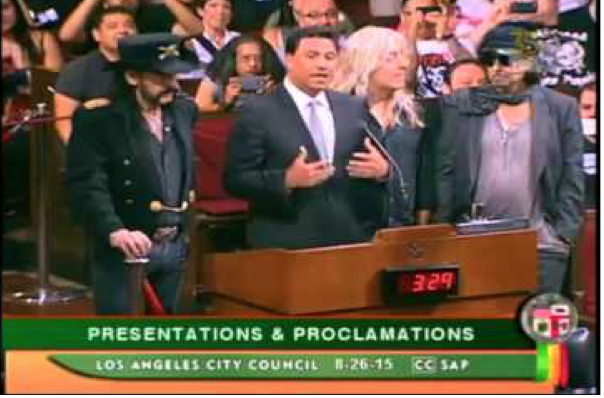 THAT CEREMONIAL SPIRIT-In the Olympic spirit, the LA County Board of Supervisors and LA City Council have been vying to see which highly-compensated municipal body can more thoroughly cram its meetings full of vacuous ceremonial presentations.

Vegas has all but written off the County -- for which tomorrow’s meeting is do or die. The City’s final “at bat” was Friday, when it shattered its own world record set on June 26, 2015.  If you subtract from the City’s past two Friday meetings the collective four hours of ceremonial commendations which took place, you are left with barely an hour’s worth of public business being done -- though that depends to some extent on whether you include as public business Councilmember Blumenfield speaking Farsi and/or Controller Galperin texting incessantly during the Nowruz celebration (Persian New Year.)

Regardless, as he stated proudly at the second meeting, the Mayor hopes we can “incorporate a gender lens through everything we do now.”

Meanwhile, those who would write off the County in this race should know that its agenda for tomorrow bristles with thirteen presentations plus a televised pet adoption appeal. To be sure, most of those commendation recipients -- ArtsforLA, Longshore and Warehouse Union Local 13 President, LA County Occupational Therapists -- won’t burn up much time, but one of the honorees -- SafetyBeltSafe U.S.A. (to be honored for their great work in reducing the number of children who suffer from tragic injuries in car collisions) -- could turn out to be a real doozy, if they bring some kids downtown.

Moreover, if all else fails, Supervisor Ridley-Thomas can go thermonuclear with an “adjournment for the fallen,” which entails each Supervisor lecturing in remembrance of someone recently deceased. Not even half of a typical Janice Hahn encomium could tip the balance in favor of the County.

In other words, this race is far from a sealed deal; and the fat lady, though slated for one-hour performances at both the City and County next week, has yet to sing.