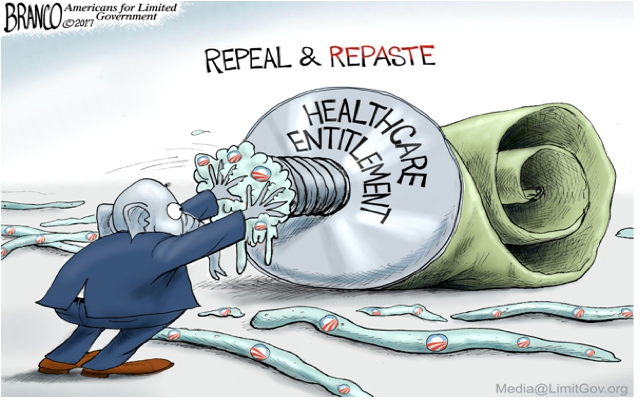 LEANING RIGHT--It’s always impossible to repeal laws that require Ann to pay for greedy people, because the greedy run out on the streets wailing that the Republicans are murdering them.

Perhaps you’re not aware — SINCE YOU EXEMPTED YOURSELVES FROM OBAMACARE, CONGRESS — but buying or selling health insurance is illegal in America.

Right now, there’s no free market because insurance is insanely regulated not only by Obamacare, but also by the most corrupt organizations in America: state insurance commissions. (I’m talking to you, New York!)

Federal and state laws make it illegal to sell health insurance that doesn’t cover a laughable array of supposedly vital services based on bureaucrats’ medical opinions of which providers have the best lobbyists.

As a result, it’s illegal to sell health insurance that covers any of the medical problems I’d like to insure against. Why can’t the GOP keep Obamacare for the greedy — but make it legal for Ann to buy health insurance?

This is how it works today:

ME: I’m perfectly healthy, but I’d like to buy health insurance for heart disease, broken bones, cancer, and everything else that a normal person would ever need, but no more.

INSURANCE COMPANY: That will be $700 a month, the deductible is $35,000, no decent hospital will take it, and you have to pay for doctor’s visits yourself. But your plan covers shrinks, infertility treatments, sex change operations, autism spectrum disorder treatment,drug rehab and 67 other things you will never need.

INSURANCE COMPANY UNDER ANN’S PLAN: That will be $50 a month, the deductible is $1,000, you can see any doctor you’d like, and you have full coverage for any important medical problems you could conceivably have in a million years.

Mine is a two-step plan (and you don’t have to do the second step, so it’s really a one-step plan).

STEP 1: Congress doesn’t repeal Obamacare! Instead, Congress passes a law, pursuant to its constitutional power to regulate interstate commerce, that says: “In America, it shall be legal to sell health insurance on the free market. This law supersedes all other laws, taxes, mandates, coverage requirements, regulations or prohibitions, state or federal.”

There will be no whining single mothers storming Congress with their pre-printed placards. People who want to stay on Obamacare can. No one is taking away anything. They can still have health insurance with free pony rides. It just won’t be paid for with Ann’s premiums anymore, because Ann will now be allowed to buy health insurance on the free market.

Americans will be free to choose among a variety of health insurance plans offered by willing sellers, competing with one another to provide the best plans at the lowest price. A nationwide market in health insurance will drive down costs and improve access — just like everything else we buy here in America!

Within a year, most Americans will be buying health insurance on the free market (and half of the rest will be illegal aliens). We’ll have TV ads with cute little geckos hawking amazing plans and young couples bragging about their broad coverage and great prices from this or that insurance company.

The Obamacare plans will still have the “essential benefits” (free pony rides) that are so important to NPR’s Mara Liasson, but the free market plans will have whatever plans consumers agree to buy and insurance companies agree to sell — again, just like every other product we buy here in America.

Some free market plans will offer all the “essential benefits” mandated by Obamacare, but the difference will be: Instead of forcing me to pay a premium that covers Mara Liasson’s special needs, she’ll have to pay for that coverage herself.

Until the welfare program is decoupled from the insurance market, nothing will work.Otherwise, it’s like forcing grocery stores to pay for everyone to have a house. A carton of milk would suddenly cost $10,000.

That’s what Obamacare did to health insurance. Paul Ryan’s solution was to cut taxes on businesses — and make the milk watery. But he still wouldn’t allow milk to be sold on the free market.

Democrats will be in the position of blocking American companies from selling a product that people want to buy. How will they explain that to voters?

Perhaps Democrats will come out and admit that they need to fund health insurance for the poor by forcing middle-class Americans to pay for it through their insurance premiums — because otherwise, they’d have to raise taxes, and they want to keep their Wall Street buddies’ income taxes low.

Good luck with that!

STEP 2: Next year, Congress formulates a better way of delivering health care to the welfare cases, which will be much easier since there will be a LOT fewer of them.

No actual money-making business is going to survive by taking the welfare cases — the ones that will cover illegal aliens and Mara Liasson’s talk therapy — so the greedy will get government plans.

But by then, only a minority of Americans will be on the “free” plans. (Incidentally, this will be a huge money-saver — if anyone cares about the federal budget.) Eighty percent of Americans will already have good health plans sold to them by insurance companies competing for their business.

With cheap plans available, a lot of the greedy will go ahead and buy a free market plan. Who wants to stand in line at the DMV to see a doctor when your neighbors have great health care plans for $50 a month?

We will have separated the truly unfortunate from the loudmouthed bullies who simply enjoy forcing other people to pay for their shrinks and aromatherapy.

And if the Democrats vote against a sane method of delivering health care to the welfare cases, who cares? We have lots of wasteful government programs — take it out of Lockheed Martin’s contract. But at least the government won’t be depriving the rest of us of a crucial product just because we are middle class and the Democrats hate us.

(Ann Coulter is an American conservative social and political commentator, writer, syndicated columnist, and lawyer. She frequently appears on television, radio, and as a speaker at public and private events.)