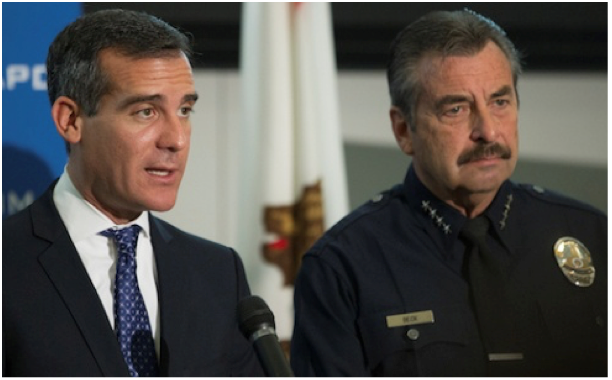 TRUTHDIG--As the Trump police state tightens its anti-immigrant grip on urban America, resistance is forming in city halls and in police departments charged with enforcing the law.

There is, of course, resistance on other issues, such as President Trump’s senseless proposed budget cuts and his determination to all but wipe out health care assistance for the poor, middle class and elderly. (Photo above: Los Angeles Mayor Eric Garcetti and LAPD Chief Charlie Beck.)

But it is immigration—the lifeblood of the United States—that most clearly reveals the essential cruelty of the Trump regime and its eagerness to embrace the practices and philosophy of a police state, an attitude shaped by the president’s hostility toward Latino and Muslim immigrants.

Attorneys and prosecutors in California, Arizona, Texas and Colorado have reported that teams of U.S. Immigration and Customs Enforcement (ICE) agents have swept into courtrooms or are waiting outside to arrest undocumented immigrants, according to the Los Angeles Times. Tani Cantil-Sakauye, chief justice of California’s Supreme Court, asked Attorney General Jeff Sessions and Homeland Security Secretary John Kelly to stop immigration agents from “stalking” the state’s courthouses to make arrests. “Courthouses should not be used as bait in the necessary enforcement of our country’s immigration laws,” Cantil-Sakauye wrote in a letter.

There are reports of great fear in mosques and throughout the Muslim community. Parents have painful talks with children on what to do if mom or dad is picked up by the immigration cops. They also must explain why grandparents or other relatives can’t join them in the United States.

Fear is taking hold of immigrant communities as they face immigration officers now freed from even the small limitations of the Obama administration. These immigration cops feel empowered, as if their time arrived with Trump’s election.

But there is powerful resistance from mayors—often tough, canny politicians—usually ignored by the national media.

Last week, mayors from New York to Los Angeles joined in a Day of Immigration Action to protest ICE enforcement of immigration laws.

Los Angeles Mayor Eric Garcetti, grandson of immigrants, said, “We have grown into the most diverse city on the face of the earth—a city that champions inclusiveness and tolerance, and welcomes everyone who seeks to realize their dreams and build their families here regardless of national origin or immigration status.

“Today, more than 1.5 million residents of our city are foreign born, and nearly two of every three Angelenos are either immigrants or children of immigrants. Our immigrants are the engine of the Los Angeles economy. … Even more so, our immigrants have woven the social, cultural, and civic fabric of Los Angeles, from our educational institutions to our artistic stages, from the halls of government to community activism, from our vibrant culinary scene to our fields of play.”

The depth of feeling on the issue—and evidence of how it cuts across immigrants’ ethnic lines—was apparent at the nation’s major airports on the last weekend in January, when thousands gathered to protest Trump’s ban on refugees from the Muslim-majority countries of Syria, Iraq, Iran, Yemen, Libya, Somalia and Sudan. Demonstrators showed up to protest in Los Angeles, San Francisco, Washington, D.C., Dallas, New York, Raleigh, N.C., Houston, Seattle and other cities.

Other demonstrations have been smaller. I watched a relatively small group gather in downtown Los Angeles on a weekday afternoon to protest the arrest of Romulo Avelica-Gonzalez, an undocumented worker. The protesters met in a corner of Pershing Square and then walked across the street to the high-rise building that houses the federal immigration courts.

Beyond aiming for Avelica-Gonzalez’s release, the rally’s sponsor—the National Day Laborer Organizing Network —is trying to build support for Senate Bill 54, introduced by California Senate President Pro Tempore Kevin de León and now pending in the Legislature. The bill would sharply limit the amount of information jailers can give to ICE agents when undocumented immigrants are released from jail. It would require counties around the state to become sanctuaries, where undocumented immigrants would be given much more protection from ICE.

De León’s bill gets to the heart of one of the many things Trump hates—the “sanctuary city” movement.

The way it works in most cases is that local jailers flag the undocumented when they are freed, permitting immigration agents to seize them and begin deportation proceedings. That’s permitted in Los Angeles County and other counties where the sheriff’s department run the jails. De León’s bill would sharply limit sheriff’s officers’ cooperation with ICE.

It’s different with police in Los Angeles under Garcetti. There, police cooperation with ICE is limited. Officers don’t approach people solely to inquire about their immigration status. LAPD Chief Charlie Beck, like his predecessors, says that turning Los Angeles cops into immigration agents will make it difficult to learn about crimes and recruit informants. Police say that undocumented immigrants already hesitate to report domestic abuse for fear of being deported.

Rather than knuckle under to Trump, Garcetti has intensified his opposition to the administration’s anti-immigrant moves.

Garcetti told the police department to continue to refuse to question people about their immigration status. He told the fire chief, the chiefs of the airport and harbor police and other department heads to do the same. He said they must tell his office or Chief Beck if federal immigration cops ask them to help enforce federal immigration laws. The city, the mayor said, must “ensure equal access to facilities, services and programs without regard to any person’s citizenship or immigration status to the maximum extent that the law permits.”

Los Angeles, Garcetti said, must “foster a welcoming atmosphere for all regardless of immigration status.”

As should the United States.