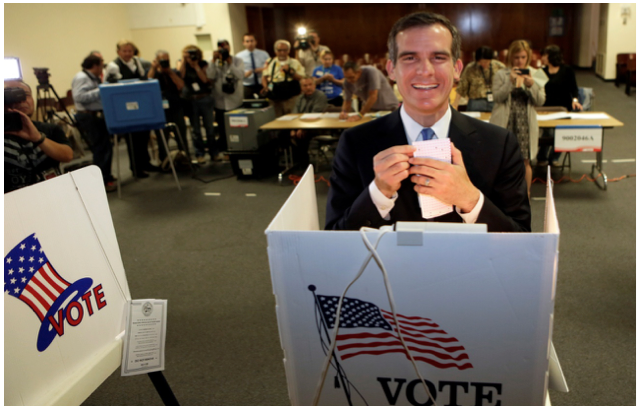 Hats off and Congratulations to Mayor Eric Garcetti for a huge victory in the election for Mayor of Los Angeles. With 10 opponents in the race, Mayor Garcetti was able to generate a huge victory with over 80% of the votes. That is an incredible victory for our Mayor who will have a firm position to continue his vision for Los Angeles over the next 5 and one half years.

While the usual term for the Mayor and the other elected city officials is 4 years, a change in the election cycle is providing the leaders of our city with an extra year and a half to adjust the election cycle to align with state and federal elections. The intended purpose is to encourage more voters out to vote in local elections.

Time will tell if this tactic works. It has not worked in the past and that is why the city elections pulled away from the state and federal election cycle to stand alone a few years ago. It was part of the Charter Reform. If there is a magic formula to motivate large numbers of voters to vote, Los Angeles needs it.

It is interesting to note that while thousands of eligible voters can gather to protest an issue or situation they refuse to vote where real change can be made. While many of the protests are peaceful, a quicker way to make change in America is by voting. A simple and highly successful process in our form of Government in America.

For the record, the County of Los Angeles spent around $19 Million Dollars of our tax money on the March 7 election.

The vision of the Mayor includes an urban city with denser development along transit lines. That means the continuation of more apartment and condo construction throughout the city and an expansion of the public transit lines. With the passage of Measure M in a previous election, the funds will be there to push forward with more public transit projects. It is all part of the vision to build up with more density. More residential units in the form of condos and apartments.

With rents of newly constructed one bedroom apartments going for over $2,000 in many communities of the San Fernando Valley, and much higher in other parts of the city, rents will never be brought down to a more reasonable cost. No matter how many residential units are being built in Los Angeles, the rents will remain out of the reach of many families. In order to purchase a single -family home in the Los Angeles area, a person needs to make an annual income in the Hundred Thousand Dollar range to simply qualify for a loan. With interest rates increasing, fewer people will have the funds to purchase a single -family home with a yard for the children to play and a dog to run around.

The only option is to pay rent for an apartment or hope to possibly purchase a condo that one can qualify for and afford.

My son recently showed interest in a condo in Culver City. The condo had 3 bedrooms and had been upgraded. The asking price was over ONE Million Dollars. To say the least, he did not purchase the unit.

Congratulations again to Mayor Garcetti for his victory in leading Los Angeles forward for the next possibly 5 1/2 years. The door is open for the Mayor to run for United State Senator if Diane Feinstein decides to retire or California Governor when Governor Brown terms out of office. Either way the future for Mayor Garcetti is clear to follow his dreams for leadership in our region of America.

Congratulations are also extended to the other Elected City Officials that won their race with no opposition in the race, City Attorney Mike Feuer, Controller Ron Galperin and District 3 Councilman Bob Blumenfield all won. The odd numbered seats of the council will all be returning and there will be a runoff for the North East San Fernando Valley Council seat in the 7th District.

How about Measures S and H?

It turned out that the majority of the voters were opposed to measure “S” and supportive of measure “H”.

What this means is that massive development will continue in Los Angeles and the gridlock transportation and congestion will not be improved in our region of California in the immediate future. More apartments and condos and traffic on our roadways. When it comes to rents in the new units, it is all about Market Rate that means what the market will bear. Little is any will be affordable for people making $10.15 or even $15.00 an hour.

Being a native of Los Angeles all my life, I can remember the public transit system that once transported people around Los Angeles in a smooth and efficient manner. Once very efficient and effective all scraped for the comfort and convenience of a personal car. Now we all live in gridlock 7 days a week on our freeways and local roads. The people have voted on Measure S and we will all live with it into the future.

Measure “H” won in the election. The measure will increase the sales tax in Los Angeles County, not just the City of LA, ¼ cent for the next 10 years. Time will tell if the 10 years turn into permanent as others have in the past. The money will be used to assist with the homeless situation in Los Angeles County.

Serving as a Board member for Hope of the Valley, a Homeless Service Center in the Valley, I have seen firsthand the sadness of the Homeless in our region. Will the funds honestly be applied to those organizations dealing with the Homeless or just chewed up with administrative and other operational costs?

The homeless situation is not improving and if the funds are not properly used to address and help eliminate the homeless on the streets with supportive services, we can point the finer and blame ourselves for not holding our elected officials responsible for improving the quality of life for all in our county.

I welcome your observations and comments.

(Dennis P. Zine is a 33-year member of the Los Angeles Police Department and former Vice-Chairman of the Elected Los Angeles City Charter Reform Commission, a 12-year member of the Los Angeles City Council and a current LAPD Reserve Officer who serves as a member of the Fugitive Warrant Detail assigned out of Gang and Narcotics Division. Zine was a candidate for City Controller last city election. He writes RantZ & RaveZ for CityWatch. You can contact him at [email protected]. Mr. Zine’s views are his own and do not reflect the views of CityWatch.)